It’s been a whirlwind weekend for Bitcoin. Let’s take a look at what went down in the crypto world.

Trading yuan through Bitcoin may technically be banned in China, but it hasn’t curbed the country’s interest in the cryptocurrency.

Samson Mow, CSO of Blockstream, noted on Sunday that according to data from Weibo (AKA “Chinese Twitter”) Bitcoin was a trending topic. More notably, this is the third time in the past two weeks Bitcoin has been trending on the platform.

Mow shared a screenshot of Weibo’s trending list from 10 May indicating the chatter about Bitcoin’s price drop as the 13th most popular term on the platform. Weibo boasts 400 million monthly active users.

#Bitcoin is trending again on Chinese Twitter, higher than it has in the past, but about the price drop today. Still, I’ll take it. 😅 pic.twitter.com/IOkIwdyCHS

Bitcoin’s reignited popularity in China seems to be partially tied to an article shared by CCTV’s finance column. CCTV is the most prominent state-owned television network in Mainland China. Although there aren’t any concrete English translations of the article, it mentioned how BTC outperformed after previous halving events, which is sure to fire up excitement.

The trend is not exclusive to China. Across the globe Google search interest around terms like “Bitcoin halving,” “Buy Bitcoin,” and “what is Bitcoin” has catapulted, leaving Bitcoiners even more bullish ahead of the halving. 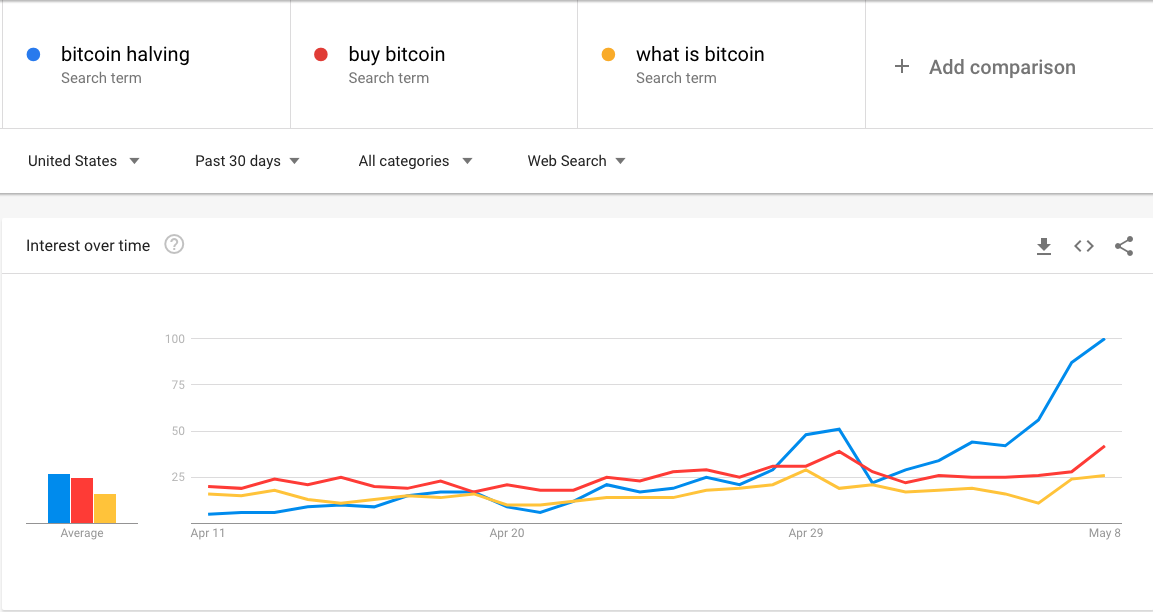 Square’s Cash App reported on Wednesday that Bitcoin revenue during the first quarter of the year rose 367% to $306 million from $65 million a year ago. The figure is up 71% quarter-on-quarter.

According to Square, the increase is thanks “to growth in the number of active Bitcoin customers, as well as growth in customer demand as a result of the decrease in the price of BTC”. The news marks a historic moment as this is the first time that BTC revenue has exceeded fiat revenue at the online payments company. From the beginning of the year to the end of March, Cash App fiat revenue amounted to $222 million, bringing total sectoral revenue to $528 million.

Bitcoin-related profit accounted for just 3.8% of Cash App gross at $7 million, compared to $8 million for the whole of 2019. Square reported the total revenue for the three months shot up 44% to $1.38 billion from a year earlier.

Looking to the future, Square detailed its plans to focus on customer acquisition and product velocity for its Cash App. Its earning report highlighted: “We see significant opportunity to invest in acquiring new customers, driven by peer-to-peer payments as well as creative marketing strategies. We intend to continue to identify opportunities to launch new products and expand the ways that Cash App can help customers manage their money”.

Chinese court rules Bitcoin is an asset protected by law

In a case that’s dragged on for years, a court in Shanghai has reportedly ruled that Bitcoin is indeed an asset protected by Chinese law.

The case involved three Chinese citizens and a Malaysian citizen who broke into the home of an American and Chinese couple in June 2018. After holding the victims hostage, the intruders forced them to transfer 18.88 BTC and 6,466 skycoins to their account.

At the first hearing of the case, the perpetrators were sentenced to six-to-eight months in prison. They agreed to return all the stolen skycoins, but not the Bitcoin, arguing that the cryptocurrencies were not assets under Chinese law. The court subsequently disagreed and ordered all cryptocurrencies be returned to the couple or for them to be paid the full value of the stolen coins. After not receiving the Bitcoin or equivalent funds, the couple filed a lawsuit. The four defenders appealed, but Shine news outlet reported on Thursday last week that the Shanghai court has ordered them to be returned stating “The Court found Bitcoin to be a digital asset that should be protected by law”.

Notably, Liu Jiang, the chief judge in the case, explained that the documents released by the People’s Bank of China (PBoC) have never denied Bitcoin is an asset and the laws in China do not prohibit citizens from holding them.

Three-time award-winning filmmaker Torsten Hoffman has released his newest Bitcoin documentary: Cryptopia. The picture features prominent Bitcoiners inlcuding Andreas Antonopoulos, Roger Ver, Charlie Lee, Laura Shin, and more. The film looks at how Bitcoin, its technology and the applications that stem from it have and will continue to positively impact our world.

The film also addresses some popular topics like web 3.0 and decentralised finance, along with a couple of different themes that his previous film “Bitcoin: The End of Money As We Know It” didn’t touch on.

The film also discusses the scaling debate, which caused a stir in the community as then-Bitcoin-evangelist, Ver, shifted his position from Bitcoin to Bitcoin Cash. Litecoin founder, Charlie Lee also features in the film, noting that “in order for cryptocurrencies to thrive we need to work with the current financial system”.

According to Hoffman, his first film had a lower budget as opposed to this one which boasted eight times the funding. He reported that “This allowed us to tell our story in a more ambitious cinematic universe. Elaborate 3D animations were created to illustrate blockchain’s inner workings. We fly 5-person crews into a remote part of Switzerland to a secret location. We filmed consistently with two 4k cameras and partially even in 8k resolution”.

The film is available for anyone to watch online on the Cryptopia website at a ticket price of 0.0007 BTC or $5.88. Check out the trailer below.

It’s encouraging to see such exciting announcements like this coming out of the industry as we all work together to educate the world about this revolutionary technology. Pennydrop, a Luno-supported initiative, will be releasing  'Banking on Africa: The Bitcoin Revolution', a crypto documentary created with Documinute. Upon release, you'll be able to watch the full documentary on Amazon Prime, but for now, check out the trailer below.

Telegram to give SEC bank records, communications in TON lawsuit

According to a court filing on Friday, Telegram has agreed to turn over a number of documents including SEC bank records and communications. The company will also answer questions about bank records that have already been produced.

Additionally, it will share information about whether it has already disbursed assets to its pre-sale customers, as well as information about assets it received from these investors, pending its relation to the termination of their purchase agreements.

Telegram and the SEC submitted the agreement on Thursday last week, to which a judge signed off on Friday according to court records. The news comes a day after TON Labs, an independent entity, announced it was launching a fork of the TON blockchain, with its own token titled Free Ton.

TON Labs’ new fork comes as a direct response to Telegram’s announcement that it was postponing the launch of its actual network by another year to April 2021. The platform offered to refund its investors, allowing them to take back 72% of their initial funds immediately or loan their funds to Telegram for a year of which they can expect to recoup 110%.

Although Telegram initially reported it would pay investors in its planned token, Grams, it later announced this wasn’t possible. It also told US investors it would be refunding them immediately without a loan option.