Edit: You can now withdraw your BCH or sell it for Bitcoin. Log in to Luno, navigate to Wallets > Send BCH.

The Bitcoin Cash (BCH*) project intends to hard fork from Bitcoin on 1 August 2017. At this stage, it appears the fork is only supported by a small minority of platforms, users and miners. It’s unknown whether this fork will survive or what value it might attain.

Bitcoin Cash is a fork of Bitcoin and at this time we don’t plan to support the buying, selling or depositing of Bitcoin Cash on the Luno platform. However, if Bitcoin Cash survives the fork and has non-trivial value, we will provide a mechanism for our customers to withdraw their Bitcoin Cash (see the FAQ, further down). This functionality will take time to implement and will only be available some days after the fork occurs.

What you need to do

If you intend to actively trade Bitcoin Cash for crypto or local currencies in the days following the fork, we recommend that you withdraw your BTC to a Bitcoin Cash-compatible platform, before the fork occurs. We can’t make any recommendations for which third-party platforms to use.

If you don’t intend to actively trade Bitcoin Cash, you may leave your funds at Luno and choose what to do with your BCH funds at a later date, if you think it has reasonable value or utility.

What to expect next

At this time, we don’t expect to disable Bitcoin withdrawals, deposits, or trading around the time of the fork on the Luno platform. However, depending on how things develop, we may at any time take reasonable temporary precautions to protect our customers’ funds. Please also prepare for the following possibilities over the coming days:

Our team is prepared for this technical event. Our priority remains to safeguard our customer’s funds under whatever scenario arises, now and in future.

What is Bitcoin Cash?

It is an alternative currency (or altcoin) supported by a group of developers, which will come into existence by forking from the current Bitcoin software. You can read more about the project here: https://www.bitcoincash.org/

Is it safe to have Bitcoin (BTC) on Luno during the fork?

If there is a split, will I have an equal amount of Bitcoin and Bitcoin Cash?

Bitcoin Cash may have some value, and if so, you can withdraw it to a Bitcoin Cash-compatible platform. It will not be compatible with any existing “regular” Bitcoin wallets, platforms or software.

What is the reason for the fork?

For context, we previously wrote about the Bitcoin Unlimited near-fork (in March 2017): On the Bitcoin hard fork. We wrote another article that gave more background on the scaling debate, SegWit, BIP91, BIP 148 and Bitcoin Cash: The scaling debate, Bitcoin forks and potential disruptions.

Has Luno changed its position on Bitcoin Cash?

We define “supporting” a cryptocurrency as giving our customers the ability to send, receive, store and in supported countries buy and sell it with local currency. By that definition, we still don’t intend to support Bitcoin Cash.

That said, due to the general confusion in the market about what people should do with their Bitcoin, requests by the community, and the chance that Bitcoin Cash will have some non-trivial value in future, we decided to make contingency plans for our customers to allow for Bitcoin Cash withdrawals.

What happens to the BCH coins on Luno?

Nothing. We don’t plan on selling, accessing or otherwise using Bitcoin Cash derived from our customers’ Bitcoin. 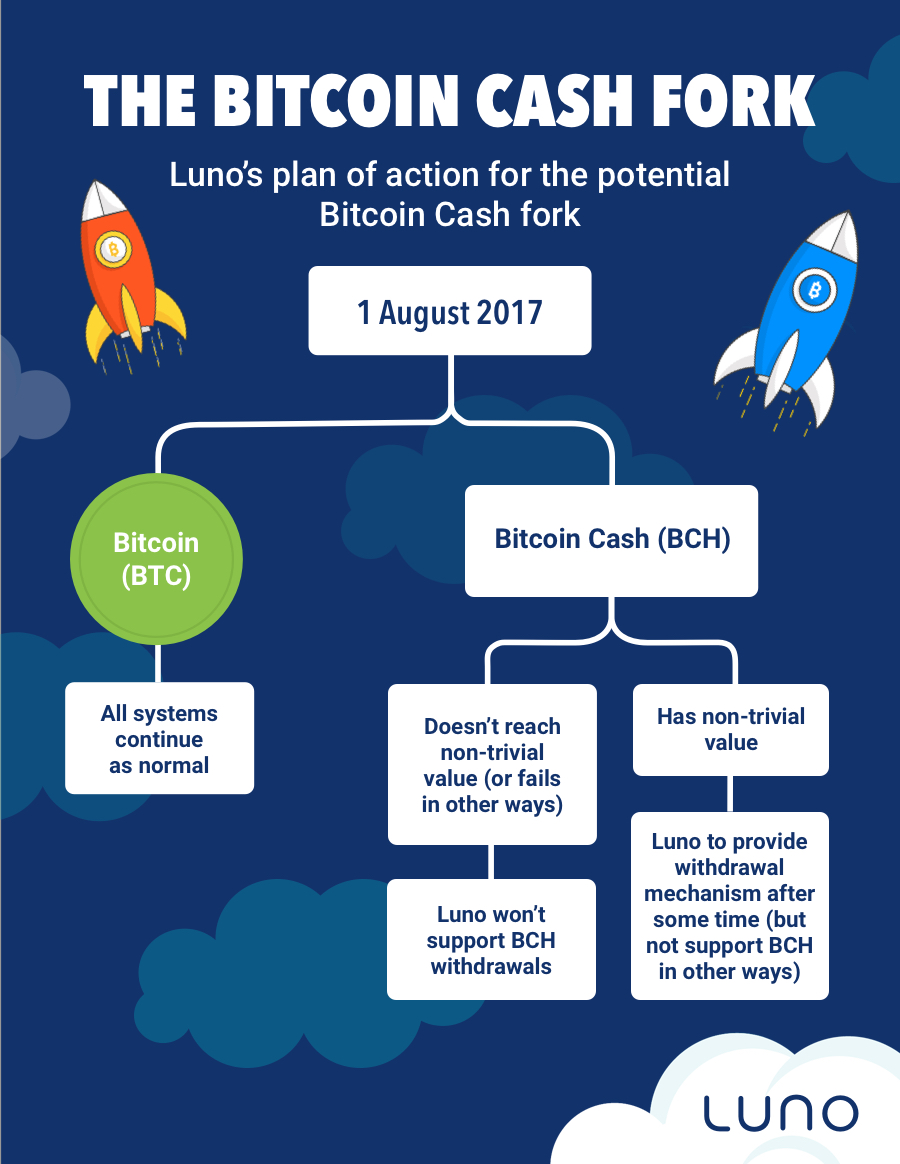 * We decided to move away from 'BCC' and instead use the code 'BCH' to indicate Bitcoin Cash. Some platforms still use the code 'BCC', but that code is already associated with another altcoin. This article has been updated to show 'BCH', but 'BCC' might appear in some of our other, older content.