Thinking about a career in blockchain? Now could be the perfect time to enter the fray, with new research suggesting that demand is high for expertise in the field.

Last month, a study by the job search engine, Indeed, revealed that career openings within the blockchain sector grew by 26% since last year. But there was more good news last week. In new research by LinkedIn, blockchain has topped the list of most in-demand hard skills for 2020. According to LinkedIn, its methodology for determining demand was based on the number of people in blockchain getting hired for high paying jobs. 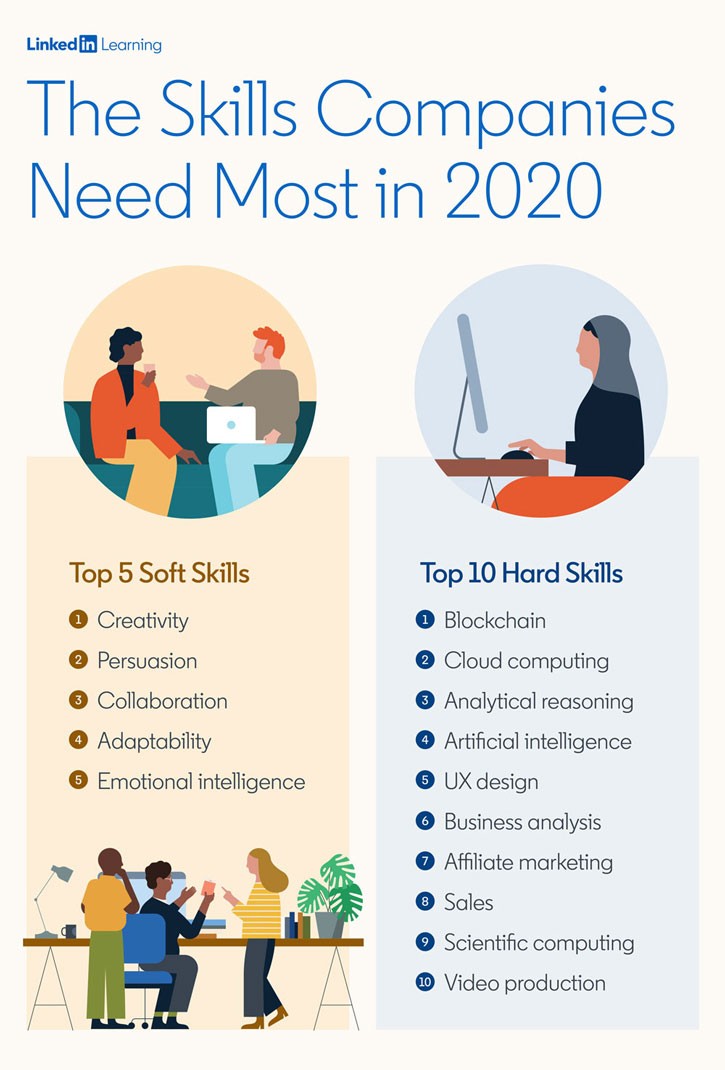 Blockchain beat out cloud computing, analytical reasoning and artificial intelligence for the top spot. In terms of soft skills, creativity topped the list, followed by persuasion and collaboration.

The increasing importance of blockchain in the jobs market is a direct result of growing interest from major tech companies and financial institutions alike. However, its popularity cannot be attributed exclusively to those sectors – its applications in supply chain and other fields has also started to move from the R&D phase and into reality.

Linkedin’s Talent Blog head writer, Bruce Anderson, explained: “Blockchain has emerged from the once shadowy world of cryptocurrency to become a business solution in search of problems. Which means that you don’t have to be in financial services to be seeking new hires who have background and expertise in putting blockchain to use.”

Anderson continued: “The promise of blockchain — essentially a shared digital ledger — is huge. Advocates see it as a secure, decentralized, and cost- and time-efficient way to transparently track shipments and transactions of all kinds [...] Blockchain has become a line of business for a who’s who of the corporate world — IBM, Oracle, JPMorgan Chase, Microsoft (LinkedIn’s parent company), Amazon, and American Express, to name just a few. Blockchain is now being used in industries ranging from shipping to healthcare, from farming and food safety to entertainment and gaming.”

LinkedIn’s research highlights that blockchain is the most in-demand skill right now in some of the world’s largest economies. This includes the United States, the United Kingdom, France, Germany, and Australia.

However, it was not all good news for budding blockchain professionals. Conversely, in LinkedIn’s 3rd annual 2020 Emerging Jobs Report, published in December, blockchain Developer fell off the top 15 emerging jobs in 11 different nations. In 2018, the report named “Blockchain Developer” the most rapidly emerging employment position of the year, with 33x growth on Linkedin’s platform.

Indeed, the only market where blockchain developers still came top was India – a country that has historically been bearish on the potential of blockchain and crypto. Does this suggest that employers are now looking for blockchain talent outside of development? Or are they simply looking farther afield?

There are many incentives for wanting to work in blockchain and cryptocurrency. The potential to change the world is probably chief among them. The chance to work with the most cutting edge technology is another. The average US salary for a blockchain developer is also $130,000, which probably helps too.

There are also now many resources available to those looking to learn about blockchain. UC-Berkeley, for example, runs a unit called Blockchain At Berkeley, which Duke University offers a course called “Blockchain and Innovation”. Many universities are also partnering with big tech. IBM, for example, is working with Columbia University on two blockchain accelerators.

And it’s not just the US where there are options. The University of Cape Town offers a course called ‘How Entrepreneurs in Emerging Markets can master the Blockchain Technology’. In France, they’re starting them even younger. Last year, France becoming the first country with a nationwide education programme that features Bitcoin. The Ministry of National Education of France updated its syllabus for 2020 to incorporate both Bitcoin and cryptocurrencies.