In our Crypto Around the World series, we take a look at the crypto landscape in different markets around the world, focusing on infrastructure, investment, regulation, and adoption.

This week, we’re shining a spotlight on the UK – a country that has historically led the world in financial innovation. But is this still the case? And is it embracing cryptocurrency to its full potential?

Is London still the FinTech capital of the world?

London has long been heralded as one of the world’s leading FinTech hubs. It’s a hugely attractive base for investors, startups, and larger firms alike, even ranking second in Findexable’s Global Fintech Index City Rankings 2020 Report. Only San Francisco Bay pipped the UK capital to first place. In 2019, there were an estimated 1,600 FinTech firms in the UK, which is expected to more than double by 2030. 76,500 people work in FinTech across the UK.

This is due to a number of factors. Chief among them is its progressive approach to regulation. A recent Deloitte report cited the Financial Conduct Authority (FCA) as a pioneering regulatory body, citing a number of initiatives that foster FinTech collaboration within their hubs. These include FinTech offices, accelerator programs, international agreements and sandbox environments where FinTech and financial institutions can “test” innovations in a safe production environment.

For example, the FCA has launched a program named Innovate, through which firms can apply for support and guidance relative to initiatives mentioned above. In a report detailing Innovate’s impact and effectiveness, the FCA cites a number of firms who’ve received support and how it helped them. These include Cuvva, a mobile app offering flexible insurance options, Blink, a flight insurance product, and Nivaura, the first company to execute a tokenised security issuance in the sandbox.

The UK has particularly benefited from a first-mover advantage in the creation of a regulatory sandbox to support FinTechs. Their model is now being implemented across the globe, which means they’ll need to continue their work on regulatory reform in order to retain their lead in FinTech growth. Since 2013, the FCA’s innovation hub has provided support to over 500 businesses, and since 2016 almost 100 firms have tested products in the FCA sandbox.

The question now is, does this forward-thinking approach to FinTech extend to crypto?

Crypto adoption in the UK

According to research Luno carried out in Q1 and Q2 of 2019, around 20% of the UK population owns cryptocurrency and this number is growing fast. This is roughly in line with the rest of Europe, which sits at an average of 24.75%.

However, there is huge potential for growth and it’s clear that customer desire is there to use crypto both as a form of payment and instance. In the survey, 67% of UK buyers said they bought crypto as an investment in Q2 of 2019 – a significant increase on the 55% people in the Q1 survey. Additionally, 37% of individuals in the UK said they would like to use cryptocurrencies to pay for things in stores and online.

This is partly because, as Matt Leibowitz, Founder and CEO of Stake, puts it: “UK customers are savvy and expect top quality financial service products.” Vilve Vene, co-founder and CEO of Modularbank shares this belief, based upon research conducted on the UK's financial space which indicates more than 90% of UK consumers claim a strong technology offering is important to them when choosing who to bank with.

Interestingly, the report also indicates that customers hold technological applications in higher stead than interest rates when it comes to choosing a banking partner. 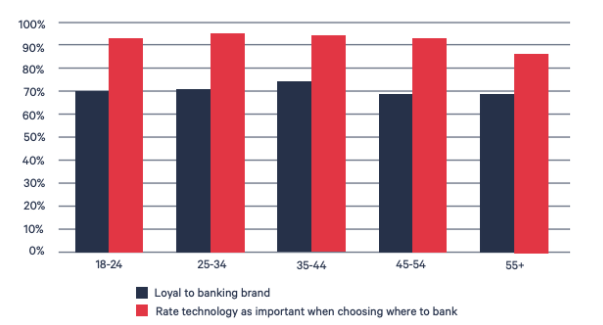 The high-level of comfort with innovative approaches to payments and FinTech can be seen throughout commerce, suggesting fertile ground for crypto. According to a Statista dossier, “The United Kingdom has the most advanced e-commerce market in Europe.” And it’s constantly growing. The most recent figures from the Office of National Statistics (UK) indicated the country’s e-commerce revenue in 2018 came to £688.4 billion, a sharp increase on the year before. 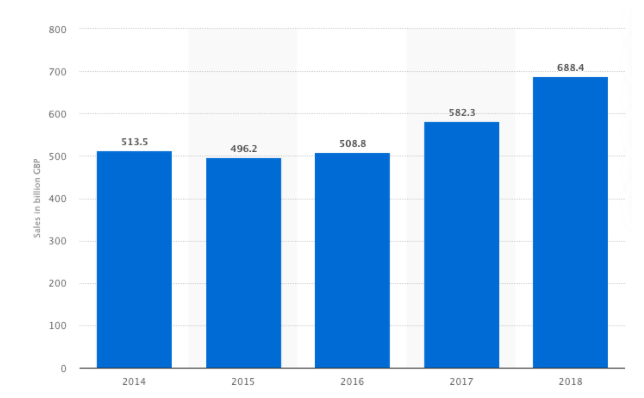 The graph below indicates this growth is only set to rise in the years to come. 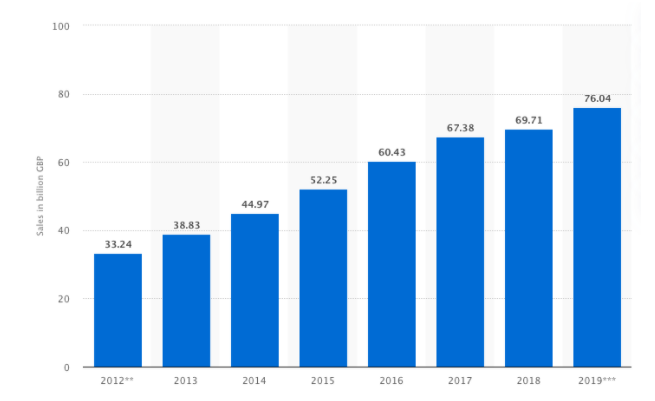 The dossier continues, “[In Great Britain], the share of smartphone users who shopped via mobile devices, especially smartphones, increased over the years. In parallel, the number of consumers who used mobile payment methods in their online transactions increased, with an expected growth of more than two million more users in 2019.”

It’s clear UK consumers are familiar and comfortable with making online purchases, and are accustomed to using their money digitally. And retailers are responding en masse. For example, at the beginning of April, over 100 car dealers in the country are gearing up to accept crypto payments for car purchases. Luke Wilmott, commercial director at AutoCoinCars explained the logic: “With five million people in the UK already using cryptocurrency, we can see that it’s definitely the way of the future. It all started with Bitcoin, and now there are several other currencies available. […] For dealers, offering cryptocurrency as a purchasing option to your customers opens up another great avenue of business.”

We can expect that as more people demand frictionless operability in the payments sector and become accustomed to interacting with money digitally, mass adoption of crypto as a means to service these demands will increase.

Put simply, CBDCs are a digital form of government-backed and issued currency. Cryptocurrencies and other virtual currencies are not issued by a state or government and as such they are not financially backed by them. Essentially, governments haven’t (yet) classified them as legal tender that you could use as you would your local currency. CBDCs would be legal tender.

A CBDC system would generally be implemented through a centralised database that’s managed by a government or central bank. In some cases, countries could even opt to make use of private-sector companies to manage their data. It is likely that they will use blockchain technology, in the same way that traditional cryptocurrencies such as Bitcoin do. However, unlike cryptocurrencies, which are decentralised, monetary control would remain within the government.

The Bank of England published a discussion paper on CBDCs in March this year. In it, the Bank details the motivations behind creating a CBDC, how the decline in the use of cash and new payment trends are shaping the industry, opportunities for the Bank’s objectives, the design process attached to creating a CBDC, and what technology a CBDC would require.

Keeping up with crypto regulations

The creation of the UK Cryptoassets Taskforce was announced in March 2018 by the Chancellor of Exchequer as part of the government’s FinTech Sector Strategy. The Taskforce is made up of the HM Treasury, the Financial Conduct Authority (FCA) and the Bank of England. As is expected due to the nature of the industry, the guidelines set out by the Taskforce are under constant revision. UK policy thinking regarding cryptocurrencies was set out by the Taskforce in its CryptoAssets Taskforce: Final Report, published in October 2018.

The Taskforce Report recognises cryptocurrencies as a subset of the broader category “cryptoasset”. This is defined as “a cryptographically secured digital representation of value or contractual rights that uses some type of [distributed ledger technology] and can be transferred, stored, or traded electronically”. Within this category, the Taskforce Report identifies three sub-categories with the following non-legislative definitions:

1. Exchange tokens: are referred to as “cryptocurrencies”, like Bitcoin. They utilise a [distributed ledger technology] platform and are not issued or backed by a central bank or any other central body. They are used as a means of exchange or for investment and do not provide the types of rights or access provided by security or utility tokens.

2. Security tokens: amount to a “specified investment” as set out in the Financial Services and Markets Act (2000) (Regulated Activities). These may provide rights such as ownership, repayment of a specific sum of money, or entitlement to a share in future profits. They may also be transferable securities or financial instruments under the EU’s Markets in Financial Instruments Directive II.

3. Utility tokens: can be redeemed for access to a specific product or service that is typically provided using a [distributed ledger technology] platform.

Importantly, UK financial regulators have issued warnings in relation to investment in cryptoassets but they are not subject to a blanket prohibition or ban in the UK. However, some will be subject to financial regulation – a comprehensive breakdown of these can be found in Blockchain and Cryptocurrency Regulation 2020 for the United Kingdom. According to the report, cryptoassets (including cryptocurrencies) are not considered money or equivalent to fiat currency in the UK.

Currently, there are no bespoke tax rules applicable to cryptocurrencies. As such, existing tax principles and rules apply, despite the uncertainty around their application, more so in relation to business and corporate tax. The government published a policy paper on cryptoassets and tax for individuals which was last updated in December 2019.

According to The Next Web, funding into cryptocurrency and blockchain startups in the UK reached a new record in 2018. Data published by Pitchbook and London & Partners, firms in the space raised more than £200m from venture capital investors. Conversely, startups in the actor only received £19.11m in 2017 and £51.96m in 2016.

The article continues to mention that: “Additionally, the data shows that technology businesses based in London are still enjoying access to almost double the amount of growth capital available to their counterparts in other European cities such as Berlin (£936.53M), Paris (£797.04M) and Stockholm (£224.23M).”

The UK FinTech State of the Nation report acknowledges that FinTech “thrives where capital, tech and talent connect with regulations and government.” In the UK, from an increasing demand for financial technology innovation, favourable regulations and governmental assistance, to a strong talent pool, it’s understandable that influential members in the crypto and FinTech space chose the UK as their home base.

These include Dr Adam Back, a self-proclaimed cypherpunk and renowned British cryptographer. He is also the co-founder and CEO of Blockstream, a company with a mission to further the development of Bitcoin and blockchain technology. He invented Hashcash, a proof-of-work system used by several anti-spam systems. He has extensive experience in cryptography protocols, Bitcoin, electronic cash and privacy-enhanced technology, among a host of other related subjects. He has a Ph.D. in Computer Science from the University of Exeter. He is also not Satoshi Nakamoto, despite the rumours.

some claim to be Satoshi, days google research blogging stories, and in court, to widespread non-belief.

seems I need the opposite: I am not Satoshi despite recent video / reddit claiming so. some factors & timing may look suspicious in hindsight; coincidence & facts are untidy.

Andreas M. Antonopoulos is another worth watching out for. The Greek-British best-selling author, speaker, educator, and highly-sought-after expert in Bitcoin and open blockchain technologies. He is known for making complex subjects easy to understand and highlighting both the positive and negative impacts these technologies can have on our global societies. As an educator, his mission is to educate as many people as possible, in as many places as possible, in as many languages as possible, about Bitcoin and open blockchains.