It’s strange to think Bitcoin has only been around for 10 or so years, considering its nifty permeation into our everyday lives. No longer is it seen as an “underground, anti-conformist” currency only attractive to criminals and money launderers. The mainstream has been catching on for a while now and today it pervades many aspects of our daily lives – even the TV shows and films we watch.

The power of popular culture to affect public opinion is incredible. As cryptocurrency’s mass adoption continues to rise, these Bitcoin references in popular culture are sure to have sparked conversation among people who may have never otherwise heard about it.

We sifted through the archives and looked at the world’s most loved films and TV shows to find all the Bitcoin-related references we could. Hopefully it lifts your spirits to the moon! Have you seen any yet? What do you think, did they explain crypto successfully? Got any you think we should add to this list? Tweet us.

Someone in the production team at the longest-running animated TV show in the world is obviously a big crypto fan – Homer and the gang have shown their awareness of crypto a couple of times.

Lisa runs into Krusty the Klown and asks if he’s broke – there’s a repo van in the background. He responds: “yeah, and all it takes is some bad luck at the ponies, worse luck in the Bitcoin market, and heavy investment in a high-end bookmark company.” He bounced back and was lighting cigars with cash again in no time, though. Maybe he HODLed.

Season 26 Episode 1: Clown in the Dumps

In the episode, notorious high school bully, Corky James “Jimbo” Jones is pictured alongside a speech bubble with the words: “send me your lunch money online!” and “ACCEPTING BITCOIN” in capital letters at the bottom of the billboard.

Not necessarily the best use case, but good to see even school bullying moving with the times. Shows anyone can use Bitcoin too.

In a recent episode, Jim Parsons of Big Bang Theory appeared as a guest on the show to explain cryptocurrencies and how a blockchain works. In a catchy song-and-dance segment within the episode, an animated ledger calls it the cash of the future, “not in your wallet, but in your computer”.

The Simpsons did it! Cryptocurrency explained to Lisa by the great Jim Parsons on #TheSimpsons! It's the money of the future!

The crypto community welcomed the episode with open arms, while pointing out that this is likely to be another in a long history of prediction they get right.

Hit TV series Startup follows a group of individuals brought together with a common goal of developing a digital currency. From the outset, their story is marred by criminal undertones as the seed money used to start the business is fraudulently acquired. Most of the cryptocurrency references throughout the series are accurate, owing to the fact Brian Stoeckert, a fintech expert from Stratis Advisory, consulted for many of the financial aspects on the show.

In an interview with CNBC, he said: “People have heard about digital currency, but they really don’t understand how it operates. They just see it in the headlines. This is one way they can follow a storyline and get a unique perspective on it.”

The show offers an interesting take on the world of digital money, with multiple other action-driven storylines concurrently on the go.

Lois Griffin tells Peter Griffin: “Every month our savings get smaller and smaller. We’ve really got to figure out a better way to budget for this family’s future.” Peter responds: “Bitcoin!” To which Lois retorts: “what?” Peter then says: “I don’t know.”

As far as references go this one’s pretty neutral, but does speak to perceptions of Bitcoin as a safer asset. Even if someone of Peter’s intelligence may not be able to quite understand it.

The 2019 film follows the life of Martin “Marty” Duran, an anti-money laundering (AML) analyst. After producing a report that a potential client is flouting AML rules, he almost gets fired but is instead tossed a hail mary and demoted to a small branch in his hometown outside of the big city.

We’ll be honest, the film didn’t bring home any awards and you probably shouldn’t wait with bated breath to watch it. It’s got “crypto” in the title, though, so there’s one point for that.

Bitcoin gets another Hollywood shoutout when so-called hitman, Motherf*cker Jones (Jamie Foxx) says he used Bitcoin to make an “untraceable” purchase of prepaid cell phones. The example speaks to one of the widely popular misconceptions that Bitcoin purchases are anonymous, and used for illicit dealings. If you’re going to buy prepaid cell phones to be used in a crime, probably best not to look elsewhere.

Possibly one of the most subtle blink-and-it’s-gone Bitcoin references appears in the Marvel blockbuster. A Bitcoin sticker is barely visible in the top left-hand corner at the bar Wade Wilson/Deadpool (Ryan Reynolds) visits, owned by his best friend. Part of everyday life. 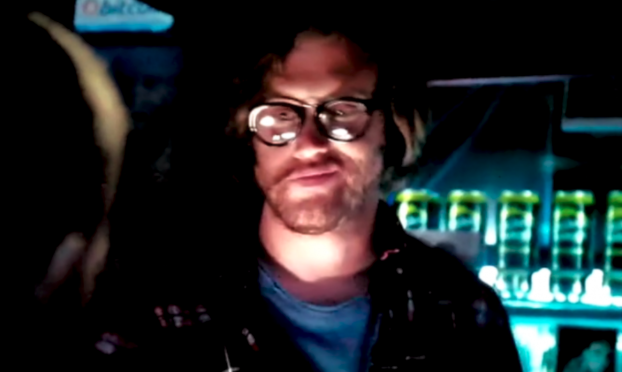 Spider-Man: Into the Spider-Verse

Everyone loves a good Marvel easter-egg, and here’s one we love even more because it features Bitcoin. A news screen on the street jokes about Bitcoin’s volatility with copy: “Bitcoin hits new high!” And “Bitcoin hits new low!” alongside one another. 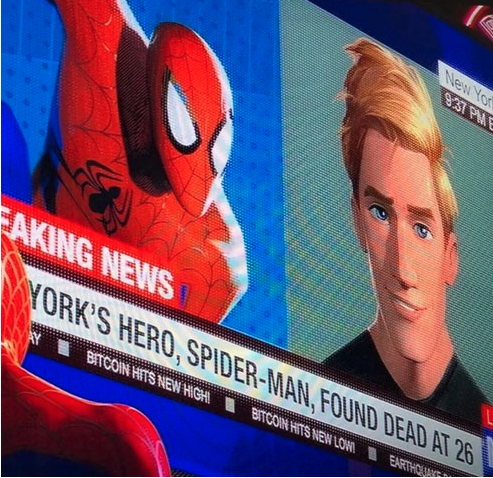 In an apparent first for a movie studio, Open Road Films actually even allowed fans to use Bitcoin to purchase tickets to “Dope.”

Bitcoin also plays a leading role in the events of the film, when a group of kids in LA find drugs and decide to offload them on the Dark Web in exchange for Bitcoin.

Early in the film, Malcolm says, “I just read that money as we know it is dead. Soon the world is only going to buy and sell products using Bitcoins. It’s like a complicated math equation.” Which isn’t perhaps what you’d call a detailed explanation, but it’s not wrong at least.

Cryptocurrency mixers are programs that jumble similar amounts together to make tracking their history more difficult. In real life, users looking to increase their crypto-privacy have readily adopted CoinJoin, a Bitcoin mixer, so it being featured in Mr Robot feels quite timely.

What’s cooler is that, for a brief moment, a Bitcoin address was actually shown on screen. One appeared as a suggestion in Elliot’s programming environment, and it didn’t take long for fans to start sending “Elliot” cryptocurrency.

The ‘Bitcoin mixer’ episode aired on November 24. At the time of writing (December 19), 31 transactions have flowed through the address flashed on-screen. Whoever controls it has withdrawn most of the Bitcoin.

Mr Robot’s crypto-realism gets 9 out of 10 Satoshis.

Another show where the creators are apparently big Bitcoin fans, with crypto featuring in several episodes. The comedy, about a startup incubator, even benefited from hiring consultants. This included Blockstack, a New Jersey-based startup co-founded in 2013 by Muneeb Ali and Ryan Shea. They are developing a platform for blockchain-powered web applications—or as Blockstack calls it, “a new decentralized Internet.”

“A lot of the conversations were about what we’ve been working on, what we’ve been doing, what some of our future plans were, so I think their goal was to draw some inspiration from us and other projects,” says Shea. Adds Ali, “They get the details right, to the extent that if you’re a hardcore engineer, there’s something there for you to appreciate.”

Donald ‘Jared’ Dunn informs Bertram Gilfoyle that the bank called for him requesting payroll-related documents pertaining to a visa as he’s a foreign national. Upon essentially admitting he’s in the country illegally, Gilfoyle requests Jared “make out [his] cheques to cash or Bitcoin”.

This speaks to a direct issue many foreigners experience when living and working in another country, legally or not. Obtaining a bank account is often tedious in any scenario, but when you’re trying to get one in another country, it’s a whole different ball game. Bitcoin knows no borders.

Gilfoyle convinced Pied Piper CEO Richard Hendricks that the company should get into crypto, promoting it as an ‘ideal form of money’ — a concept first proposed by Aristotle almost 2,500 years ago. To show his enthusiasm, Gilfoyle develops an entire presentation to convince his startup co-founder that they should launch their own cryptocurrency. It’s very convincing.

In the episode, Pied Piper’s enemies start joining the blockchain network until they reach a 51 percent consensus, which gives them the power to “delete all of our users, all of our developer apps, crash our coin. This would be the end of Pied Piper,” as Dinesh explains it.

Crypto fans and industry professionals were quick to point out that, although the 51% attack is a real concept, it may have been exaggerated. Cornell University professor and developer Emin Gün Sirer believes the extent of these attacks is slightly embellished on the show:

“Miners at 51 percent or more have a lot of powers, but they do not have the ability to change the actual rules of the system, nor can they usurp funds. They can rewrite the existing blockchain in a limited fashion: they cannot introduce transactions that don’t already exist, they can omit any transaction that they want, and they certainly cannot change any of the existing rules.”

There are many reasons to dislike the Big Bang Theory. The characters, the storyline, and the absence of jokes are just a few. For crypto fans though, season 11 episode ‘The Bitcoin Entanglement’ presents a reasonably realistic, if simple, portrayal of Bitcoin.

The episode sees Leonard, Howard and Raj discussing Bitcoin’s recent price rise. They remember that some years ago, they actually mined a large amount of Bitcoin – Bitcoin that is now worth a significant sum of money. Unfortunately, they don’t remember where they put it. D’oh! They spend the episode searching old laptops as they attempt to track it down. Hilarity ensues, sort of, and eventually [SPOILER ALERT] they fail to retrieve it.

There’s nothing particularly wrong with the episode’s representation of Bitcoin, although it doesn’t really delve into the technical details. But it does do a good job of highlighting the importance of storing your Bitcoin somewhere safe – like a Luno wallet!

“One million dollars straight in crypto, in cold storage,” explains Billions star Damian Lewis — who plays Bobby ‘Axe’ Axelrod — while holding a Ledger Nano S in front of his face.
Axe is offering to pay a trader at his hedge fund $1 million in an unnamed cryptocurrency as a reward.

Ben Mezrich, the author of the Winklevii-centric book “Bitcoin Billionaires,” acted as a consulting producer to keep it accurate.

The latest season of Billions also explores the technology that underpins them, blockchain, and whether it could power a mobile-based voting system suitable for American democracy. It’s pretty good. Worth a watch.

or a large chunk of the season 3 episode, ‘Bitcoin for Dummies’ the show’s three main characters delve into bitcoin’s ecosystem at length. The trio discusses trading, mining, and the price of BTC – which was $3 back then! Definitely interesting as a historical artefact.