“You’re late, why wasn’t this released on Friday?” we hear you ask. An honest question that deserves an honest answer: We’re shaking things up! That’s your answer. From now on, you’ll get the low-down on last week’s biggest crypto stories every Monday. Hold onto your hats.

Last week, there was more FUD, fury and redemption for crypto. There was a now-debunked bitcoin double-spend debacle, Janet Yellen to-and-froed on her crypto stance, and BlackRock took the first steps into the bitcoin futures space. And more. Much, much more! Let us know on Twitter what kind of news you’re interested in to kick-start your week and we’ll give it to you.

BlackRock, the world’s largest asset manager, has authorised two of its funds to invest in bitcoin futures, according to filings released with the Securities and Exchange Commission (SEC). The $8.7 trillion asset manager has filed paperwork acknowledging that its funds 'may engage in futures contracts based on bitcoin.' This would allow it to hold bitcoin derivatives, among other assets, in the BlackRock Income Opportunities fund and the BlackRock Global Allocation fund.

The funds are geared to trade cash-settled bitcoin futures, which means the holder will receive cash credit once the contract expires. Some community members say they saw the move coming, when, back in November, Rick Rieder, BlackRock’s CIO of Global Fixed Income told CNBC he thinks cryptocurrency is here to stay and that he believes it’s durable. “Do I think it will take the place of gold to a large extent? Yeah, I do, because it’s so much more functional than passing a bar of gold around.”

Even more telling was BlackRock CEO Larry Fink’s remarks that he believes crypto could evolve into a global asset.

Marc Bernegger, a board member at digital asset manager and broker Crypto Finance, told the Financial Time: “Bitcoin is a global macro asset and I think more and more traditional asset managers are realising its value as a portfolio hedging tool. This is good for bitcoin because it means more liquidity and a healthier market.”

Antonopoulos to the rescue! Sorry FUDders, no double spend here

One of the main reasons Bitcoin succeeded where other digital cash failed is its solution to the double-spend problem.

This all came into question last week when CoinTelegraph published a report suggesting a $22 worth of BTC double-spend had occurred, implying the same 0.00062063 BTC had been spent twice on the Bitcoin blockchain. If it were true, Bitcoin would be rendered completely worthless. Fortunately, it wasn’t true.

The supposed double-spend debacle arose from BitMEX speculation, which later revealed “on closer inspection”, it was “likely an instance of RBF 8replace-by-fee], where the lower transaction fee won.”

For anyone interested, here are the details we have for the transactions in question.

Andreas Antonopoulos, a well-known Bitcoin advocate, entrepreneur and author clarified the events on Twitter, explaining it was a chain reorganisation from the Bitcoin blockchain. He added that these reorganisations are commonplace on Proof-of-Work (PoW) blockchains, and that when two blocks are mined “almost simultaneously”, they complete for the same height which means they both have the same parent block in the blockchain.

At the end of the day, only one of the blocks can succeed and because a block is mined every 10 minutes, only 10 minutes later would another block be mined with one of those competing blocks as its parent block.

Check out Antonopoulos’ full explanation below.

A more detailed explanation of the whole

"A double-spend broke Bitcoin" FUD that was circulated by an irresponsible publication. 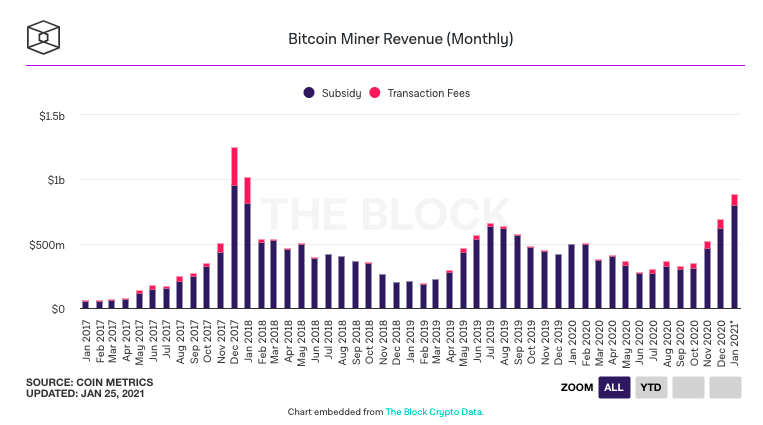 This spike in revenue can be attributed to the sharp increase in the price of bitcoin, currently trading at $33,048. Notably, BTC also hit an all-time high earlier this month, surpassing $41,000.

According to The Block, “the heightened revenue comes amid an extended supply crunch in the mining hardware sector, with demand far outstripping available machinery – and fuelling a resurgence in demand for older machines as well.”

It was a topsy-turvy week for President Biden’s Treasury Secretary pick, Janet Yellen. Last Tuesday, she said in an oral testimony that “cryptocurrencies are of particular concern” when it comes to enabling crime and terrorist activity. On Friday, however, she was back in the crypto community’s good graces, striking a more balanced tone in her written testimony by acknowledging crypto’s “potential” to improve the financial system.

To be fair, Yellen’s remarks on Tuesday came in response to a question from Democratic Senator Maggie Hassan who asked her to outline some emerging technological concerns and how the Treasury should combat new forms of terrorism criminal financing. Yellen’s response – “we really need to examine ways in which we can curtail their use” – was left to the end of the five minutes allocated to Sen. Hassan for questions.

Yellen’s written testimony gave her more of a chance to express her views, as seen below.

Just out: Here's Janet Yellen answering a question about Bitcoin in her written testimony for the record in her nomination hearing. Much more nuanced than what she said in oral testimony. https://t.co/iijuEbUbB1 pic.twitter.com/FHuzEHlovz

As Treasury Secretary, Yellen would have purview over the Financial Crimes Enforcement Network (FinCEN), a Treasury bureau geared to combatting money laundering and terrorism. Under Trump, Treasury Secretary Steve Mnuchin proposed new rules for reporting transactions to private crypto wallets, drawing much ire from the community who rightfully questioned why they should be bound to stricter rules than regular banks.

Fortunately, President Biden put a freeze on all federal rulemaking, meaning the FinCEN proposal would first be reviewed by Biden appointees, like Yellen and her designated FinCEN chair. The Senate Finance Committee unanimously cleared Yellen’s nomination on Friday, with a full Senate vote set to take place today.

Chengdu is set to be the next city to roll out a test of China’s central bank digital currency (CBDC). Chinese payments media Mpaypass referenced an internal memo from the Bank of Communications in a report on Monday, announcing the city’s plans to start the test on 27 January, with the local government giving away 30 million digital yuan (worth $4.6 million).

At the same time, Chinese e-commerce giant JD.com will be giving away another 20 million digital yuan, worth $3.1 million, that can be spent on online shopping.

The free digital yuan will be issued via a lottery, following what Shenzhen and Suzhou did in previous tests since last October.

Lottery winners will be able to spend the free digital yuan in local merchants from 4 February to 26 February, throughout the Lunar New Year festival. To date, the local government hasn’t published any announcement of the test through its official media channel and it’s not yet clear how many residents will be able to participate in the trial.

The report did, however, mention that the city of Suzhou, which had its first digital yuan test in December, is set to kick off a second city-wide trial on 27 January with an issuance of 40 million yan (worth $6.1 million).