It was a healthy week in the markets, with positive news flowing from the crypto gates. There’s a new high water mark in adoption, a sturdy uptick in hash rate, and Elon is counting his Bitcoin. Here are the week’s biggest headlines.

The number of crypto users doubled from 100 million to 200 million in the first four months of 2021, according to new research.

The research, carried out by Crypto.com, used on-chain data and a “blend of other parameters estimating the number of global crypto owners.”

Their findings suggest this positive upward trend has come from institutional adoption, with the report noting that: “Bitcoin led growth from January to April, as heavyweight institutions like PayPal, Microstrategy, Visa, and Mastercard announced plans to support crypto. Similarly, Ethereum saw significant growth in May and June as institutional investors continued to favour the token.

What will the second half of the year bring?

The hash rate has made impressive gains after its initial drop, clawing back 82.5% of losses sustained after China’s ban on miners, according to YCharts. Although it hasn’t returned to previous highs just yet, experts believe the uptick bodes well.

Bitcoin’s hash rate—the unit which measures the processing power of the Bitcoin network—hit an all-time high in April, but fell dramatically when Chinese authorities across several provinces issued shutdown orders. This forced miners to set up elsewhere, with many relocating to regions with cost-effective energy usage such as the USA and Kazakhstan.

According to mining giant Slush Pool’s Edward Evenson, “over the next difficulty adjustments for the rest of the year, we can expect a slow and steady increase in the global network hash rate and, thus, an increase in Bitcoin mining difficulty.”

Elon Musk, Bitcoin evangelist-turned-critic-turned-hopeful-turned-?, has shared details on how much of the cryptocurrency his electric vehicle company owns. This came in response to a rough calculation provided on Twitter by Tesla Shareholder David Lee.

To illustrate his calculations, Lee used the fair market value of Tesla’s bitcoin holdings in its entirety, as shown in the company's Form 10-Q, which was filed with the U.S Securities and Exchange Commission. In the filing, Tesla wrote:

Lee also considered the closing price of Bitcoin on June 30, which was $30,040. The sum of his calculation suggested that Tesla owned roughly 42,069 individual bitcoins.
How did Musk respond? “We don’t have that many, but it’s close.” 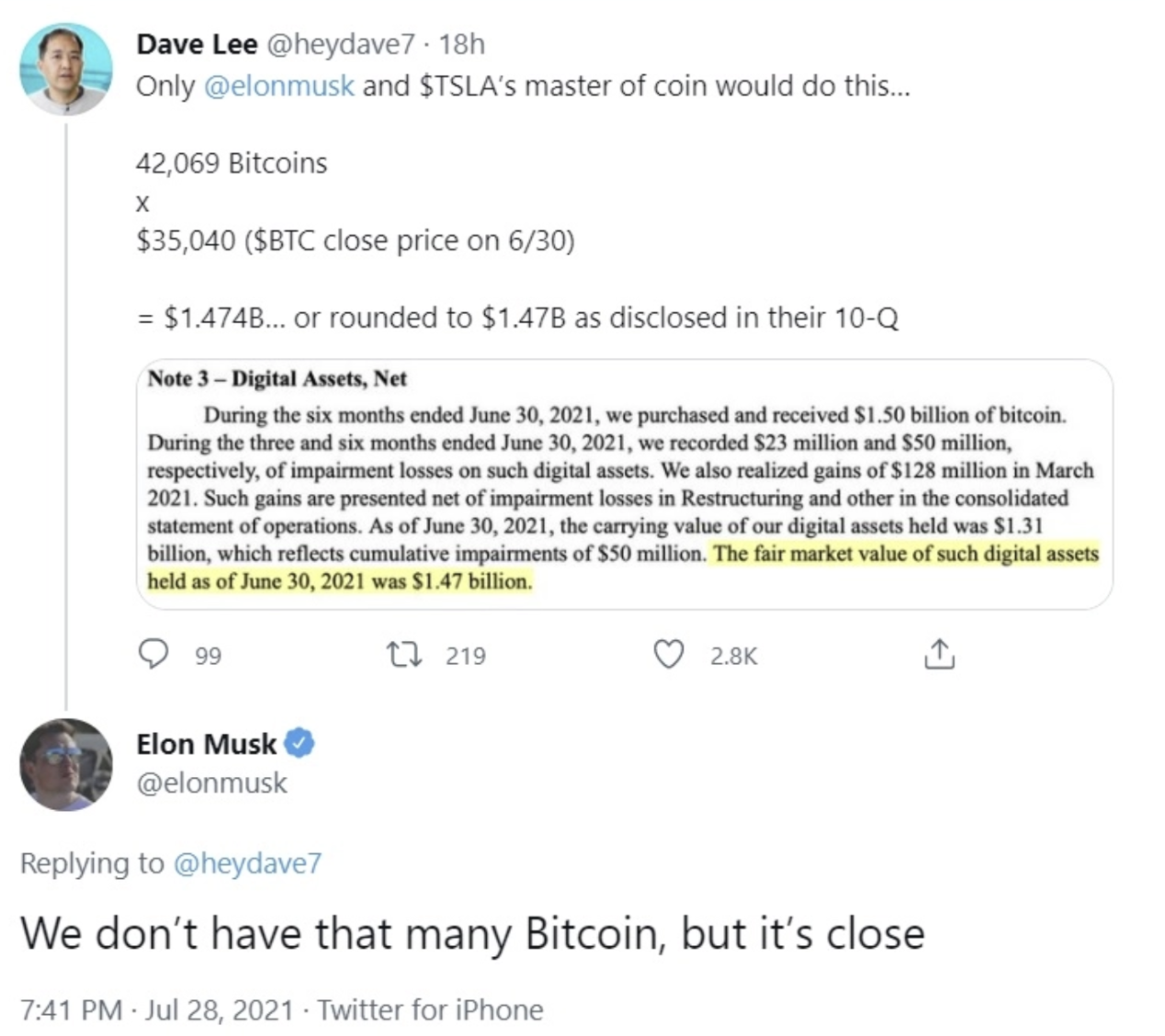 Earlier in May, Musk used the B-Word conference, an event hosted by the Crypto Council for Innovation, to share that he also has his very own tally of Bitcoin, among other cryptocurrencies like Ethereum and Dogecoin.

"I might pump, but I don't dump," Musk said. "I definitely do not believe in getting the price high and selling ... I would like to see bitcoin succeed."