It’s been another sunny Monday for the crypto community, with the Bitcoin price starting the week strong. Time to kick back, relax and catch up on the latest crypto headlines.

Non-fungible tokens have been the crypto story of 2021 so far, despite having been around since 2015. Blockchain-based digital pieces by artists such as Beeple have sold for tens of millions of dollars, and mainstream media coverage has arguably outshone even Bitcoin. But has the hysteria finally reached its zenith?

In a stamp of mainstream approval few would have seen coming just months ago, NFTs made a glorious appearance on Saturday Night Live this weekend. Here’s Janet Yellen (aptly depicted by Kate McKinnon) and Batman’s sidekick, Robin (AKA Pete Davidson) to break them down for you, Eminem-style.

what the hell’s an NFT pic.twitter.com/BcFylopM63

Earlier today, Visa announced plans to allow the use of a stablecoin, USD Coin (USDC), to settle transactions on its payment network. The move follows a trial earlier in March in which a USDC transaction was sent to the payment giant’s Ethereum address at crypto custody service, Anchorage.

Its use of Ethereum is particularly exciting because it removes the need to convert digital coins into fiat currency before the transaction can take place, making it much easier for businesses to start integrating this new payment option.

And that’s not all – according to Visa’s CEO Al Kelly, the company is also looking to “enable the purchase of Bitcoin via Visa credentials.”

As more banks and corporations embrace crypto, the time is ripe for payment platforms to get on board and make it easier for companies and individuals alike to interact with the future of finance.

According to a press release, individuals will be able to print their pass or store it on their smartphones using the Excelsior Pass Wallet app. The pass will be used to confirm an individual’s recent negative PCR, antigen test result, or proof of vaccination as part of efforts to reopen businesses and event venues.

So far, Madison Square Gardens and the Times Union Center have said they will implement the pass with other locations to be added as the program expands.

Bitcoin miners rake in more than $1.5 billion in revenue in March

According to data collected by The Block Research, bitcoin miners have earned more than $1.5 billion in revenue so far in March.

This marks the most revenue earned by the mining sector in any one month. With a few more days still to come in April, the final figure is expected to surpass the current $1.51 billion.

The majority of the funds earned – $1.36 billion – were in the form of per-block subsidies (the 6.25 BTC earned with the creation of each transaction block). Miners earned a total of $148 million in fees, which are paid by transactors to ensure their transactions are more likely to be included in the next block.

March’s all-time high figure exceeds that of February’s wherein miners earned a total of $1.36 billion across the sector. According to these figures, miners have collectively earned more than $1 billion for three months in a row. 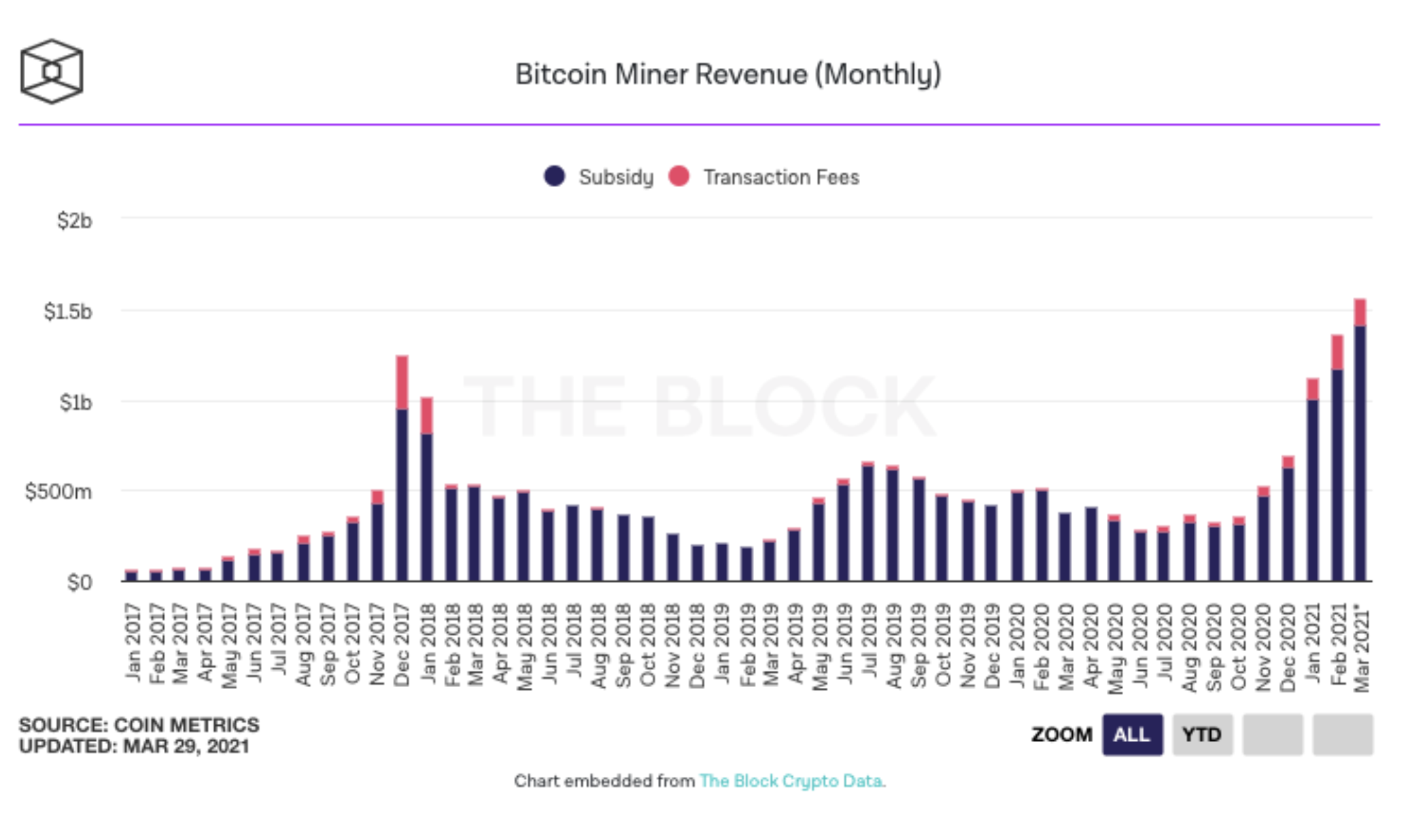 They say hindsight is 20/20, and this story is a perfect example. Just over a week ago, billionaire investor Øystein Stray Spetalen told an audience at the DNB Invest conference to denounce bitcoin as a “nonsense currency”.

But they all come around at some point, admittedly not normally this quickly – Spetalen’s now not only bought his own crypto, he’s also invested in Norway’s largest Bitcoin exchange, MiraiEx.

In a pre-recorded video at the DNB conference, Spetalen aired his concerns about Bitcoin’s carbon footprint and said “we’re doing well with the payment systems that are in place today.” Since then, in an interview with Norweigan publication Finansavisen he announced his part ownership of MiraiEx.

“When the facts change, I change. I met the MiraiEx founders Thuc and Øyvind the day after the podcast was recorded, early in March, and I realized that I had been wrong. And when I also read that [industrial magnate and fellow Norwegian billionaire] Kjell Inge Røkke had got into Bitcoin, it was quite obvious. I can't bear to see that Røkke makes money and not me.”

Interestingly, every Norweigan citizen has nominal holdings of 26,720 satoshis (~$15) in bitcoin thanks to the government’s pension fund buying stakes in institutional bitcoin hodlers like Tesla, MicroStrategy and Square. Wouldn’t it be nice to stack sats courtesy of your government? Good on you, Norway.