After last week’s excitement, things seem to have calmed down somewhat for Bitcoin over the last 7 days. Its brief foray into $10,000+ territory may have been fleeting, but it was glorious, and bulls look to be consolidating in preparation for another breakout. The question now is whether it can be sustained this time.

Over in the stock market, the Nasdaq recorded a new all-time high. In recent months, we have grown accustomed to seeing a positive correlation between the two assets – Bitcoin and the equity markets – but this correlation seems to have faded away recently. This will be good news should the stock market take another battering.

Altcoins are doing well. Ether is looking strong and several altcoins have enjoyed increased focus lately. The long-awaited Ethereum 2.0 protocol upgrade, which will change the consensus mechanism to proof-of-stake (PoS), is expected to happen sometime this year and investors may be starting to position themselves accordingly. 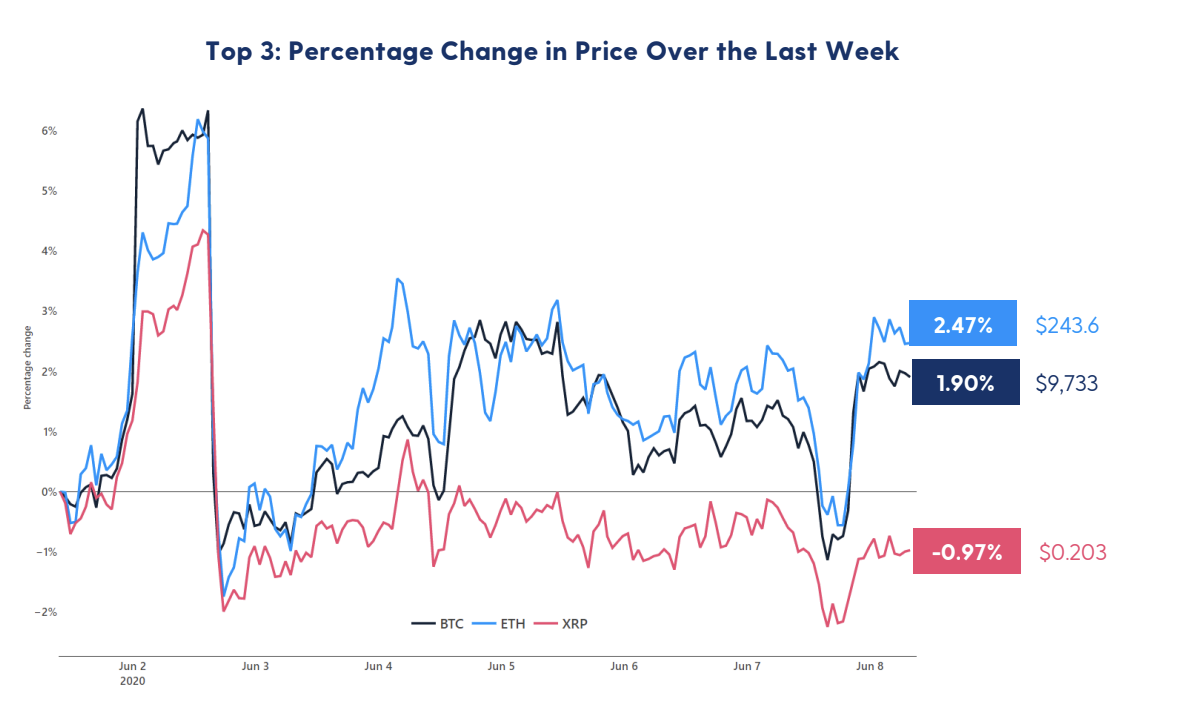 Last week’s recovery to highs above $10,400 was short-lived mainly because it failed to attract the desired volume. After a rapid drop, the price has now stabilised around the $9,600 zone and support here is once again looking solid.

On the upside, the next hurdle lies at $9,800. If Bitcoin does make it and breaks above the psychological $10,000 and holds, this should spark a mini bull-run. Above $10K, the first level of resistance lies around $10,200. The bulls will then be looking for a daily close above the yearly high – reached in mid-February and again a week ago. Hitting this mark will most likely lead to more upside.

However, for this to be sustained we will have to see fresh demand from somewhere. The trading volume continues to trend downwards after a small climb last week when we hit $10,000. 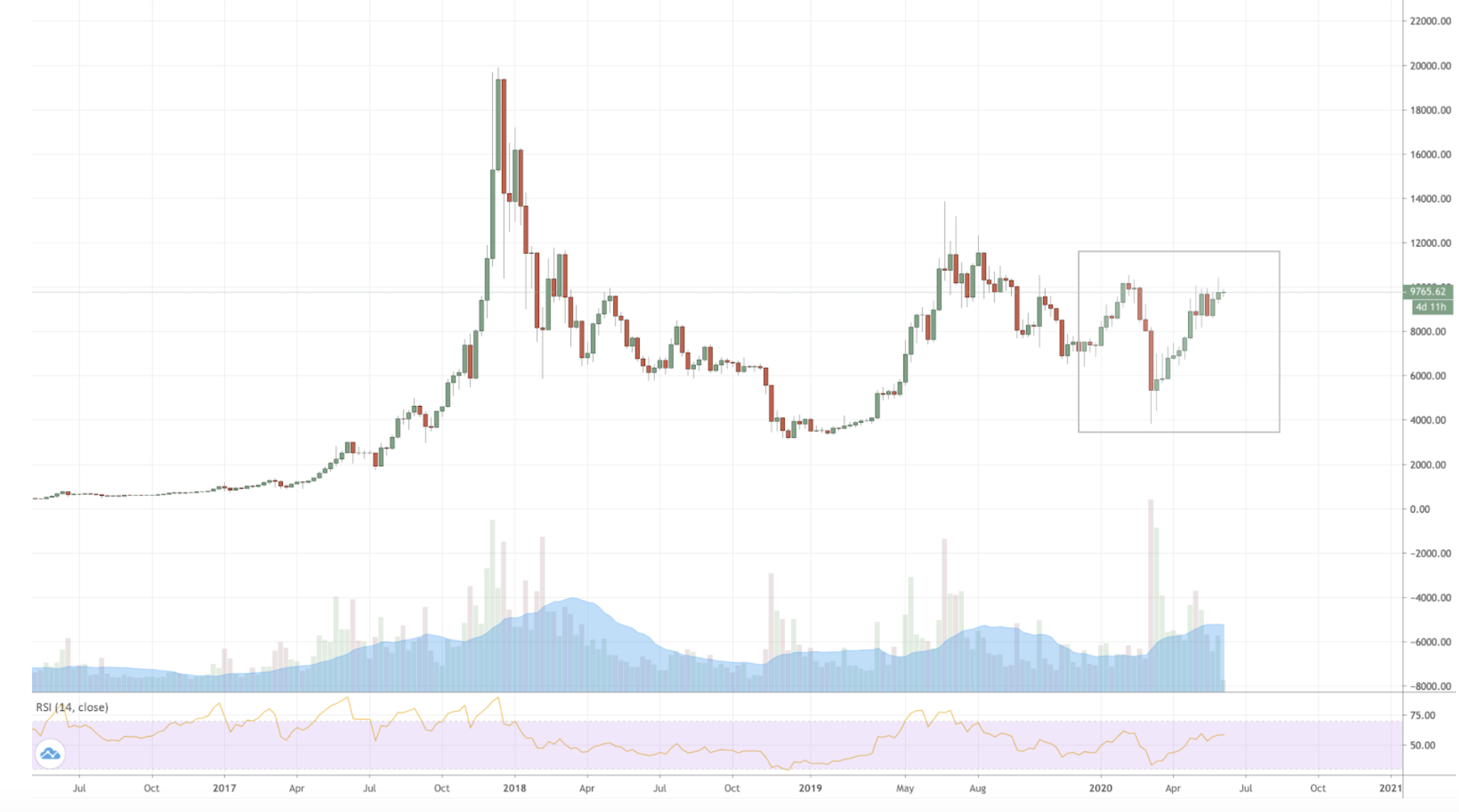 If Bitcoin can lift itself into a bull market from here, the halving narrative and increased institutional investment could help it on its way to a new all-time high. However, the steep upwards trendline looks to have flattened off slightly, possibly indicating a trend shift in favour of the bears. A breakdown in price from here would demonstrate how the asset class simply isn’t ready to topple 2017’s majestic high.

The Fear & Greed Index has been ranging between neutral and greedy lately. If the sentiment can stabilise above the “fear” area, it will be a sign of more optimism in the market. Looking at the last year, the sentiment has not been great, spending most of the time in the fear territory. The greedy periods have been short-lived and this is something investors should monitor if we finally stabilise above the neutral state.

The long-awaited Ethereum 2.0 protocol upgrade, which will change the consensus mechanism to proof-of-stake (PoS), is expected to happen sometime this year. Wallets must hold more than 32 ETH to participate in staking and to operate as validators when Ethereum 2.0 goes live. Data from Nansen shows that almost 120,000 Ethereum wallets are ready for staking. This number has grown by 13% over the past year. However, that is merely 0.3% of all non-zero Ethereum balances. There is no 1:1 relationship between humans and wallets, so it is challenging to define how many people that are actually ready for staking. 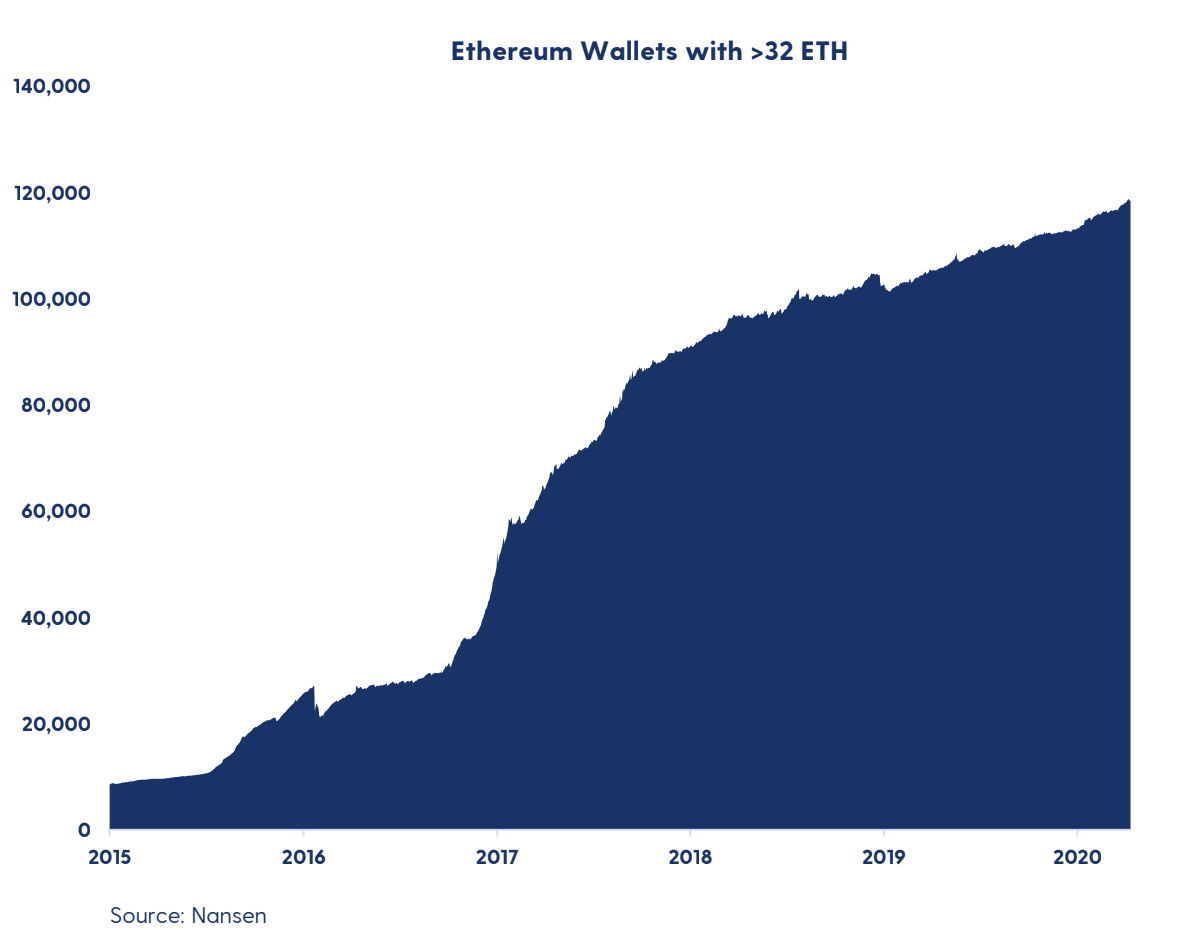 Miners are offloading bitcoin holdings after the halving

Data shows that miners are offloading their inventory post halving. The miner’s rolling inventory (MRI) tracks the difference between what miners generate and what they move. Hence, an indication of how much bitcoin miners are selling. An MRI less than 100% means that inventories are growing, since miners are moving less than they mine. An MRI above 100% means that miners are moving more than they are mining. The only way to do this is by also moving inventory built up previously. This clearly indicates a change in behaviour from miners after the bitcoin halving in May. One reason miners are accelerating the selling of their inventories since halving is to cover the reduction in revenue from the block reward halving. 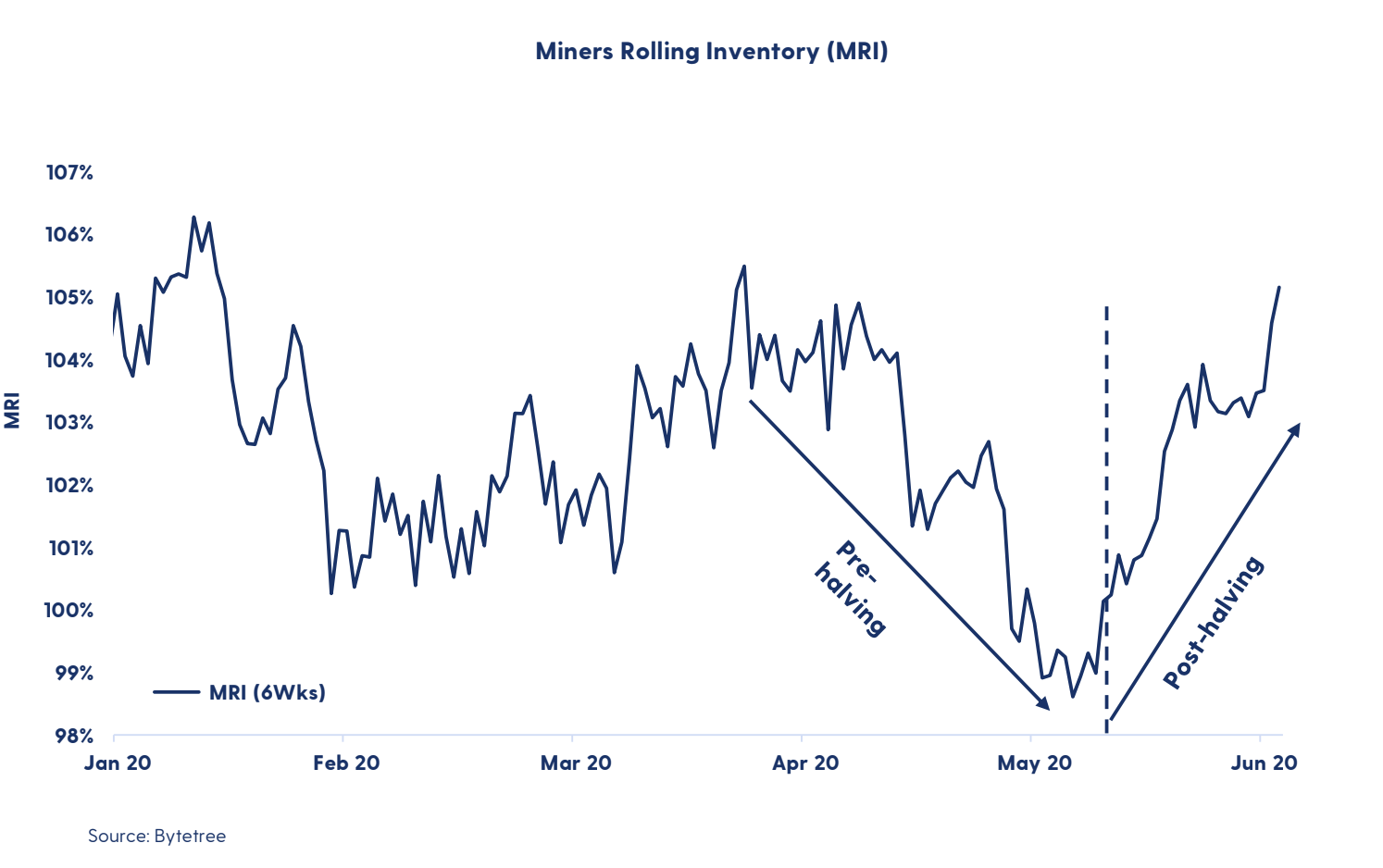