“Innovation is a mysteriously difficult thing to dictate. Technology seems to change by a sort of inexorable, evolutionary progress, which we probably cannot stop–or speed up much either.” Matt Ridley, The Wall Street Journal

If the speed of technological advancement seems like it’s accelerating at an unprecedented pace, it’s because it is. By using newer technology to create and innovate, an increase in the quality and speed of these innovations are likely to follow. Think about your first mobile phone or computer and think about the ones you own today. Chances are they’re worlds apart in terms of design and functionality.

Since the dawn of the internet, things have continued to grow at an exponential rate. Increasingly, technology is becoming democratised. It reaches (almost) every corner of the world.

Almost 4.48 billion people were active internet users as of October 2019. That’s 58% of the global population. 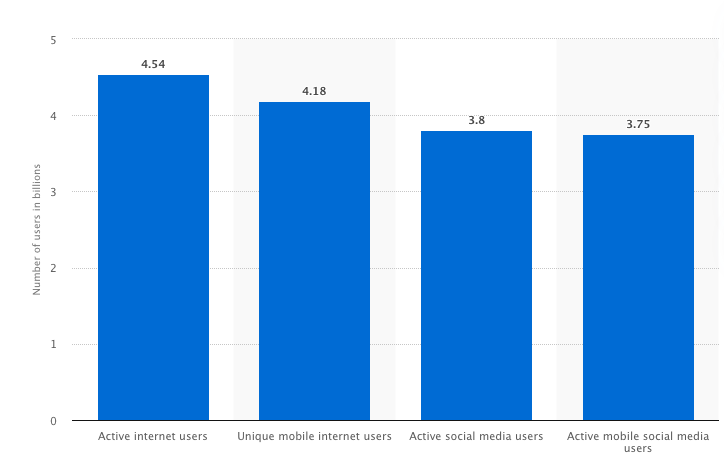 It’s estimated that more than 5 billion people own mobile phone devices and over half of those are smartphones. It’s important to note here that mobile phone penetration doesn’t occur equally, though. People in advanced economies are far more likely to have smartphones than those in their emerging counterparts. The more technology evolves, the wider the gap between the haves and have-nots becomes.

The need for speed

It’s impossible to discuss ubiquitous, fast-paced evolution without mentioning Moore’s Law. Gordon E. Moore, co-founder of one of the most well-known computer companies, Intel, had a theory that the number of transistors on a microchip doubles every two years, even though the cost of computers is halved. Therefore, Moore’s Law states, we can expect the speed and capability of computers to increase every couple of years and that the price we pay for them to decrease. Essentially, his view accounts for exponential growth.

But the growth of technology is rarely a revolution, as many call it. Rather, it’s an evolutionary process. One that both changes the society in which it exists, and changes according to its needs. It’s a reciprocal relationship. “Technological change is a far more spontaneous phenomenon than we realise. Out with the heroic, revolutionary story of the inventor, in with the inexorable, incremental, inevitable creep of innovation.” (Matt Ridley, The Wall Street Journal)

Economist, W. Brian Arthur, describes the core three principles of technology in his book, The Nature of Technology.

The first principle is that all technologies harness and exploit some phenomenon. German philosopher Martin Heidegger asserted that the development of technology depends on uncovering an aspect of nature. For example, the phenomena could be based on how humans act in a social network, or how atoms form molecules. The former could speak to the development of social media platforms like Facebook, and the latter on the creation of computer code, like HTML.

The second principle is that all technologies are combinations. This speaks to the way in which new technology is built from combining other existing technologies to create another. Think about the creation of more complex computers which led to the advent of smartphones. But, that’s not to say that one would necessarily not exist without the other. This is where supply and demand come into play, effectively determining what comes next after assessing what is desired or needed based off what we already have.

The third principle is that components of technologies are themselves technologies. Arthur describes technology as recursive, meaning they hold attributes found both at the component and product level. Think of all the microchips which could function alone, but also together, to form one single product, like a hard drive, for example. This hard drive could then serve as the memory device for your entire computer, within your computer.

New technology brings benefits, but they also bring problems. In turn, however, finding solutions to these problems drives new technologies. Bitcoin (mining) has long been condemned as extremely damaging to the environment, yet it’s also one of the greenest industries, with 74.1% of the energy used in the mining process coming from renewable sources. This shift to sustainable electricity production arose from the incentive to create “green” technologies. The same occurred with the combustible steam engine.

The beginning of the cycle starts with a technology’s conceptualisation. There are often no functional products or market studies just yet, but the potential sets off interest and proof-of-concept demonstrations or prototypes.

At this stage, the technology is implemented by early adopters. Media publicity usually follows, with successful and unsuccessful implementation examples.

Failures or flaws within the technology lead to disappointment. This is the stage where producers may be unsuccessful and in turn, may halt the production of their technology. At this stage, it’s important for problems to be addressed in order for progress to be made in the development of the technology.

Here the technology’s potential for tangible use cases and applications becomes more broadly understood, leading to implementation and/or testing.

In the final stage, the technology becomes widely implemented, characterised by wider market adoption and well-understood and known applications.

For a closer look at crypto’s hype cycle, check out our blog.

Through the crypto microscope

The reciprocal relationship between technology and society that spurs its evolution can be seen in the cryptocurrency space. Cryptocurrency is at once an application of an entirely new technology and a new way of looking at something integral to everyday life – money. It’s the product of thousands of years of evolution - the evolution of digital technology, of cryptography, and an increasingly conceptual financial system. Its creation was motivated by how digital technology has evolved the way we make transactions and the way we think about money. It was motivated to solve problems embedded in our financial system that arrived after many years.

In short, it’s the product of many factors evolving together. As such, its own development is hard to predict. As society, software, and our collective financial wants and needs evolve, so does cryptocurrency. Its final incarnation remains to be seen, but as adoption continues to grow, more time, money and effort are being utilised to allow for greater expansion.

Developing nations will use Bitcoin first. Here’s why