Ethereum’s transaction fees have hit historic peaks this week as the crypto community goes nuts for DeFi. Elsewhere, India could be gearing up for another epic bull run following the government’s lifting of banking restrictions for exchanges. And Craig Wright could be coming soon to theatres near you.

Keep reading for all this week’s crypto headlines.

Ethereum gas fees (transaction fees) reached an all-time high of $6.87 million on Wednesday. The recent surge in fees suggests users are willing to do whatever it takes to get their transactions completed amidst a decentralised finance (DeFi) boom. 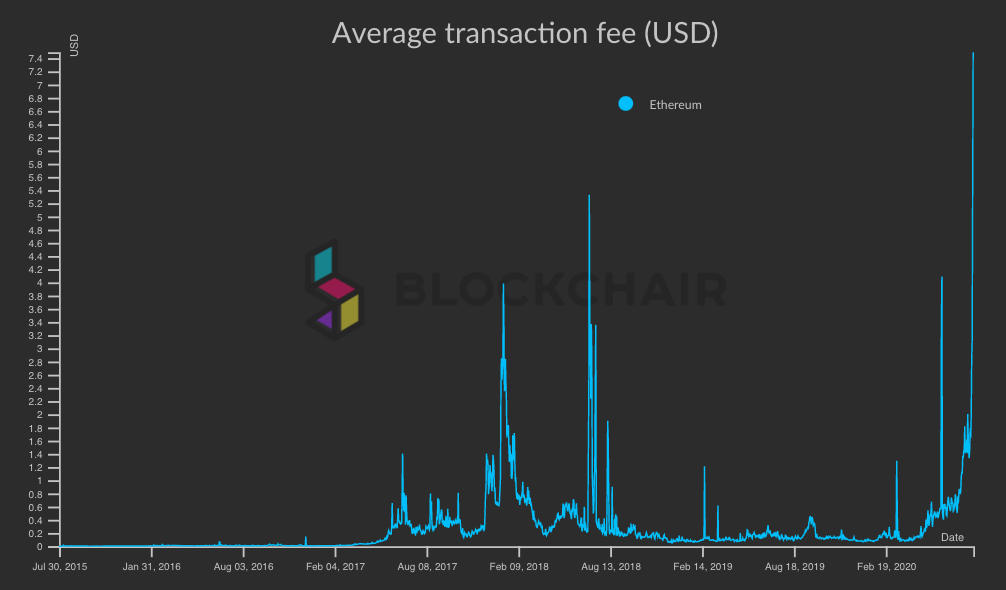 On Wednesday night, the average fee per transaction on Ethereum reached $6.04, marking the platform’s highest fees since 2015. Up until mid-July, fees hovered below $1 before beginning to soar.

Fee increases coincided with surging activity on popular DeFi protocols like Uniswap, leading some to believe trading bots were behind the massive hike. DeFi protocols rely on high levels of usage to generate fees and eventually profits for token holders, but the massive surge could offset potential profits.

According to CoinDesk, although Ethereum developers have toyed with a number of technical options to reduce fees by scaling the network’s transaction capacity, “a possible fix remains months away”.

It’s certainly not a bad time to be an Ethereum miner. Learn more about how Ethereum transaction fees work.

Is India’s bull run on its way?

India’s crypto trading volumes have skyrocketed since the Supreme Court of India lifted banking restrictions for exchanges in March.

A spokesperson for Paxful indicated India is now among the five fastest-growing Bitcoin user groups in the world. Paxful’s Indian volumes surged from around $576,000 in May 2019 to $8.97 million in July 2020, and the total peer-to-peer Indian volumes on Paxful and LocalBitcoins reached $13.7 million. 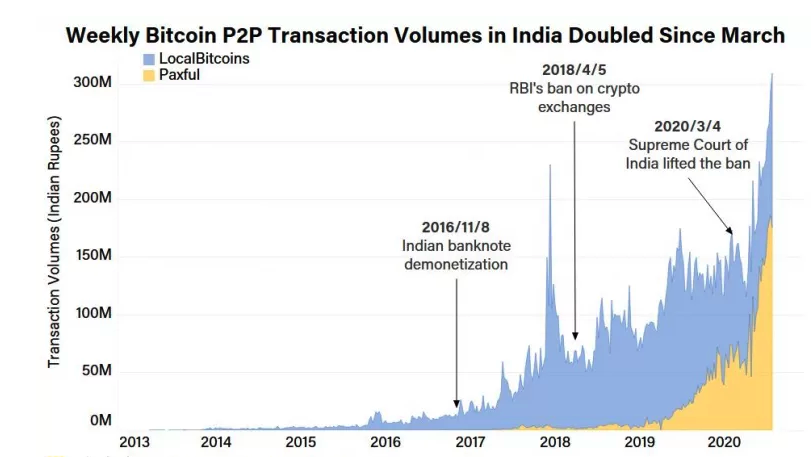 Siddhartha Dutta, CEO of Marlin, a tech startup in Bangalore likened the recent spike in demand for Bitcoin to Indians’ reaction to demonetisation back in 2016. As the government recalled a large percentage of paper currency at the time, some Indians learnt the hard way that hodling Bitcoin was a safer bet than relying on fiat money. Just 18 days after demonetisation, Bitcoin on Indian crypto exchange, Zebpay, surged in price from $757 to $1,020.

The move came after the firm’s CEO and founder Michael Saylor announced his intention to explore purchasing Bitcoin, gold or other alternative assets in an earnings call in late July. At the time he argued the returns from cash were fading and the dollar was weakening.

He reiterated these concerns on Tuesday, citing other numerous macroeconomic factors as motivation.

“This investment reflects our belief that Bitcoin, as the world’s most widely-adopted cryptocurrency, is a dependable store of value and an attractive investment asset with more long-term appreciation potential than holding cash,” Saylor said in a statement. “MicroStrategy has recognized Bitcoin as a legitimate investment asset that can be superior to cash and accordingly has made Bitcoin the principal holding in its treasury reserve strategy.”

He continued, “Bitcoin is digital gold — harder, stronger, faster, and smarter than any money that has preceded it. We expect its value to accrete with advances in technology, expanding adoption, and the network effect that has fueled the rise of so many category killers in the modern era.”

Is Goldman Sachs also itching to grab a piece of the crypto pie? They’ve appointed a new global head of digital assets, Mathew McDermott, who has spent almost 15 years at Goldman Sachs, starting as an executive director in 2005.

According to FinTech Futures the move “marks a decisive push by the bank into cryptocurrency with an old-school banker at the helm.”

McDermott told CNBC he’s begun exploring the possibility of creating a fiat digital token, but indicated the project is in its early days of development.

To work alongside him, McDermott’s appointed Oli Harris as head of strategy. Harris is behind JPMorgan Quorum blockchain as well as the development of the bank’s settlement coin, JPMCoin.

McDermott views digital assets as a disruption to the status quo but recognises their worth owing to the fact more and more institutional clients are becoming interested in the sector’s potential.

He hasn’t ruled out the possibility the bank may collaborate with its Wall Street rival or tech firms like Facebook, in the future.

I have started filming a documentary on Craig’s life creating #Bitcoin. Have hired a professional team out of London and they will dig through everything including all evidence going into court for McCormack trial. pic.twitter.com/JYm25yshTB

Ayre said he’s been given the go-ahead to film and added an “in-production” still to the tweet. Reaction to the news mirrors reactions to Wright’s claims that he is Satoshi Nakamoto–let’s just say, the comments section on Ayre’s tweet is on fire.

Ayre also revealed he’s hired an investigative reporter to write a book about Wright after an Australian publisher scrapped “Behind The Mask: Craig Wright and the Battle for Bitcoin” in January. Affirm Press told local media at the time the book has been dropped because the “threat of litigation was too high”. Despite Ayre having offered to fund and publish the book himself, nothing’s come of it.

And Wright’s no stranger to litigation, even without a strong case. He’s filed lawsuits against Blockstream CEO Adam Back and Ethereum co-founder Vitalik Buterin for defamation for doubting his Satoshi claims (he subsequently dropped both cases). His case against McCormack is ongoing with discovery in the matter set to begin on 4 September.