This week, all eyes have been on institutional investors as they continue to demonstrate bullish bitcoin attitudes. Elsewhere, 1,000 Satoshi-era bitcoin moved wallets for the first time since 2010, and Ethereum 2.0 is reportedly all set for a 2020 launch.

Sit back and enjoy your Friday with a side of crypto news.

JPMorgan strategists said: “We believe that millennials, or the younger cohorts of the US retail investors universe, have been using the Cash App as an alternative vehicle to the Grayscale Bitcoin Trust to add to their bitcoin holdings.”

They expect the app’s popularity will make it inevitable for “other payment companies to follow in facilitating client bitcoin investments or risk being left behind.” As it turns out, PayPal and Venmo are said to be in the works to offer crypto buying and selling services to their millions of users.

Additionally, they said they view Square’s recent $50 million worth of bitcoin purchase as a “strong vote of confidence” in bitcoin’s future. With MicroStrategy’s recent $425 million bitcoin bet, strategists believe this is “likely the beginning”.

While Square may be on the up, Grayscale Investments can hardly be said to be falling behind. This week, the world’s largest digital currency asset manager announced it had raised $1.05 billion for investment projects during Q3 – marking the largest inflow of funds from investors during a single quarter in Grayscale’s history.

On Wednesday, the firm released a detailed report indicating its latest investment activity. According to the report, the majority of its investments (81%) in Q3 came from institutional investors. 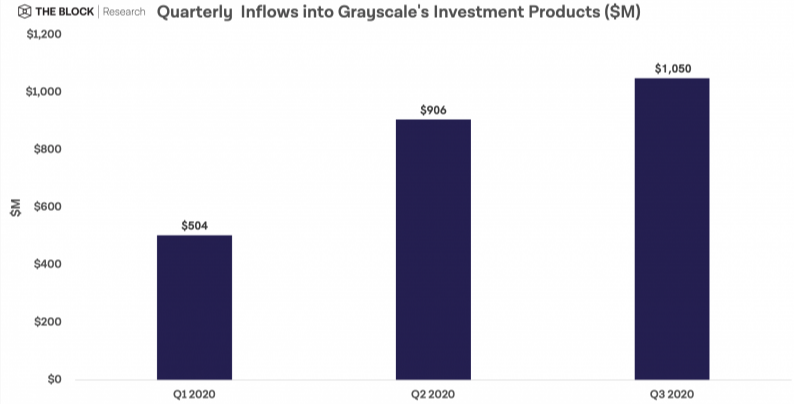 So far this year, Grayscale’s total investments sit at $2.4 billion – double the total of $1.2 billion invested in Grayscale products between 2013 and 2019.

Grayscale's Bitcoin Trust is one of the fastest-growing investment products, with inflows of $719.3 million in Q3. In total, the firm had over $5.9 billion in managed assets as of 30 September 2020.

Ethereum 2.0 is currently still on track to launch in 2020, according to the project’s lead coordinator, Danny Ryan.

In the Ethereum Foundation’s official broadcast of the Zinken launch on Monday, Ryan said:

“That’s my impression. This is an ongoing dialogue with client teams, and we need to take a second to look at this testnet, but my understanding is that this will trigger the next series of things. There are always blockers that might show up. We need to do this responsibly…

Us coming up with a launch date – it’s not me, it’s not [Ethereum co-founder Vitalik Buterin], [rather] it’s this synthesis of everything that’s going on, conversations with engineering teams, and doing the best we can.”

To find out more about what we can expect from Ethereum 2.0, check out our blog.

1,000 Satoshi-era bitcoin moved wallets for first time in a decade

Cryptocurrency trader Kirill K. created a timeline of the transfer in a LinkedIn post:

Kirill suggested the latest movement is related to a separate transfer in March, also involving 1,000 bitcoin.

Macro investor and former hedge fund manager Raoul Pal believes the price of bitcoin will reach $1 million in five years. He shared his views on the economy, gold and bitcoin last week in a podcast interview.

“The economy is not going to recover for a lot longer than we expect. There’s no stimulus around and we’ve got more problems to come in Europe, the U.S. and elsewhere. And businesses don’t have enough cash flow, they’re closing in droves and that’s what I called the insolvency phase.” He added, “The only answer is more from the central banks, so that’s why I started to buy more and more bitcoin.”

His portfolio was initially equally distributed between US dollars, gold, equities and bitcoin. But he revealed that his bitcoin allocation is now “probably above 50%”. Acknowledging the potential downside, he said the upside is “so much bigger”.

He explained: “I don’t dislike gold but when you get to the macro opportunity [...] if bitcoin starts breaking out of these patterns that it’s been forming, it is going to massively outperform gold. I’m 100% sure of that so in which case why would I have the gold allocation.”

On his bullish price forecast of $1 million in five years, he said: “It’s going to be not because the world is collapsing [but] it’s because there’s gonna be adoption by the real large pools of capital.”