The stock markets may have taken a dip this week, but bitcoin is still going strong. With countries going back into lockdown and the US election just weeks away, can anything slow down the bitcoin steam train?

Here's the roundup of this week's major crypto headlines. Read it, print it, and put your fish and chips in it. It's Friday.

The Wyoming State Banking Board has given crypto startup Avanti the go-ahead on its business plan for digital asset custody and the creation of Avit, a tokenised US dollar.

According to the announcement, Avanti is now a bank charter, meaning it has the same powers as national banks. It’s now the second crypto company to become a bank, after Kraken launched Kraken Financial in September.

Avanti’s founder and CEO, Caitlin Long, said; "Currently the only type of US financial institution that can provide final and simultaneous settlement of trades between digital assets and the U.S. dollar—because it is the only type currently approved to handle both within the same legal entity—is a Wyoming special purpose depository institution like Avanti.

“Wyoming has the only U.S. regulator with a bank supervisory and regulatory program for digital assets that is near completion.”

As a bank, Avanti will be required to be fully compliant with the Bank Secrecy Act, anti-money laundering laws, and other existing rules and regulations.

Iran’s central bank turns to crypto to pay for imports

According to a report from the state-run Iranian Students’ News Agency (ISNA), Iran has established new regulations to funnel bitcoin mined by Iranians into state coffers to be used for import payments.

The Ministry of Energy and the Central Bank of Iran (CBI) now require the country’s legally-registered crypto miners to sell the tokens they mine to the CBI. The nation’s foreign reserves have dwindled by over 33% in two years, making bitcoin an attractive workaround to crippling US sanctions.

Iran’s limited ability to use any dollars it holds in reserves has led the country to officially switch its primary reserve currency from the US dollar to the Chinese yuan. It’s also contemplating creating its own digital currency. Embracing the yuan and a state-sanctioned digital currency could help Iran sell more of its oil on the global market.

In a speech to the Council on Foreign Relations last December, Brian Hook, the US Special Representative for Iran, said, "The regime is struggling to acquire the foreign currency they need to procure imports such as machinery, industrial inputs and consumer goods."

Iran officially legalised crypto mining in August 2019, though simultaneously prohibited trading. The regulations were designed to collect taxes from miners who might otherwise take advantage of Iran’s heavily subsidised electricity. Thanks to its enormous oil and natural gas reserves, Iran has some of the cheapest energy prices in the world. But without being able to sell it at the risk of violating US sanctions, its crypto-mining strategy is a nifty sidestep.

$2 billion in bitcoin is now on Ethereum

According to Dune Analytics, there’s a whopping $2.021 billion worth of bitcoin on the Ethereum network. That’s 150,049 bitcoin – equivalent to 4.32% of Ethereum’s market cap.

In mid-September, that figure sat at just 80,000 bitcoin, valued at just under $1 billion at the time. The price of bitcoin has gone up by $3,000 since then.

The most popular version of this is called Wrapped Bitcoin, which holds almost 80% of the market share with a market cap of $1.5 billion all on its own. If you send some real bitcoin to its smart contracts, you’ll receive Ethereum-based WBTC in return.

Bitcoiners could move their bitcoin to Ethereum to be used in decentralised finance (DeFi) protocols, many of which typically offer high yields. For long-term hodlers, it’s an opportunity to earn money on any bitcoin they own.

According to metrics site, DeFi Pulse, investors have poured in around $11 billion worth of crypto into DeFi smart contracts. The synthetic bitcoin market took off along with the DeFi craze towards the end of June and has grown significantly since then. This could be because of the huge BTC price increases since August.

Bitcoin’s 7-day rolling average hash rate dropped by over 10% since earlier this month.

The average total computing power competing to mine bitcoin has fallen from around 142 exahashes per second (EH/s) for the first two weeks of October to 126 EH/s. During that period, bitcoin’s price rose above $13,000. 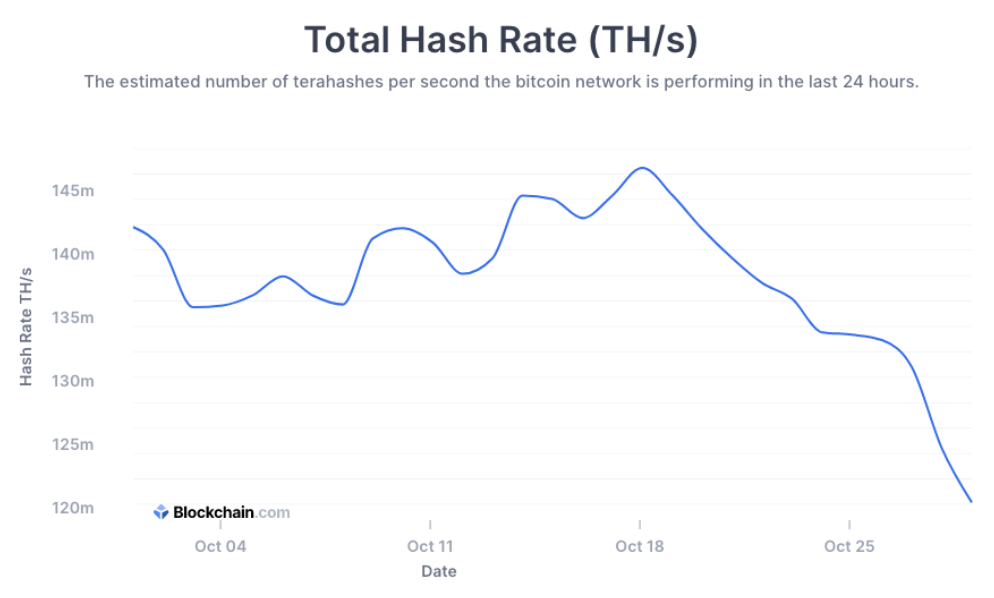 Many are attributing the drop to the season change in China, which is home to more than 70% of the network’s mine operators.

"The [summer] hydro season has ended and now starts a month-long flat water season," Kevin Pan, co-founder of PoolIn, said in a Weibo post on Monday. "A grand migration has now begun with miners looking for fuel-based power plants before the winter dry season arrives."

As the dry winter season approaches, some operators of mining facilities face jigger electricity rates and unstable supplies compared to the rainy summer. Because of this, many mine operators have unplugged their equipment from hydropower stations and transferred them to fossil fuel power plants scattered across China’s vast northern territories.

This migration usually takes about a month but with COVID-19, timing is more unpredictable.