If 2020 hasn’t been crazy enough, things have taken another weird turn. TikTok users have taken time out from messing with Trump rallies and are now pumping cryptocurrencies to record highs. This week, it was the turn of Dogecoin, which was originally created as a joke.

Elsewhere, in crypto Jack Dorsey’s Square is hitting as high a valuation as some major US banks, and a French artist has earned more than 1 BTC thanks to QR codes he spray-painted on his street murals. Catch up on this and more in our top headlines from this week.

Square’s $55bn valuation as high as major US banks

Following a rally in shares, payments platform Square’s valuation is now approaching that of the US’s largest banks.

Square’s market cap has almost doubled since May, now sitting at $55 billion. According to Bloomberg, this makes its valuation higher than Truist Financial and all but four of the banks in the KBW Bank Index.

JP Morgan Chase and Bank of America remain ahead of Square, but the payments company is only around $20 billion away from reaching the same level of Goldman Sachs’ $74 billion market valuation.

Square stocks rose 13% after an analyst speculated the firm could eventually gain as much as 20% of direct deposit accounts in the US. Bloomberg also attributes the surge to the growing popularity of Square’s Cash App, which boasted 24 million at the end of 2019.

As the use of physical money continues to decline, will Square market cap eventually surpass the banking behemoths? Let us know your predictions on Twitter.

Bitcoin’s hash rate has hit a new all-time high as miners pledge more computing power to secure the network. The seven-day average sits at 124.75 EH/s as of 9 July.

The previous record occurred early in March, just a week before the COVID-19-induced crash significantly disrupted both network and price activity. Even more significantly, it comes soon after the Bitcoin halving, suggesting that the network is stronger than ever. 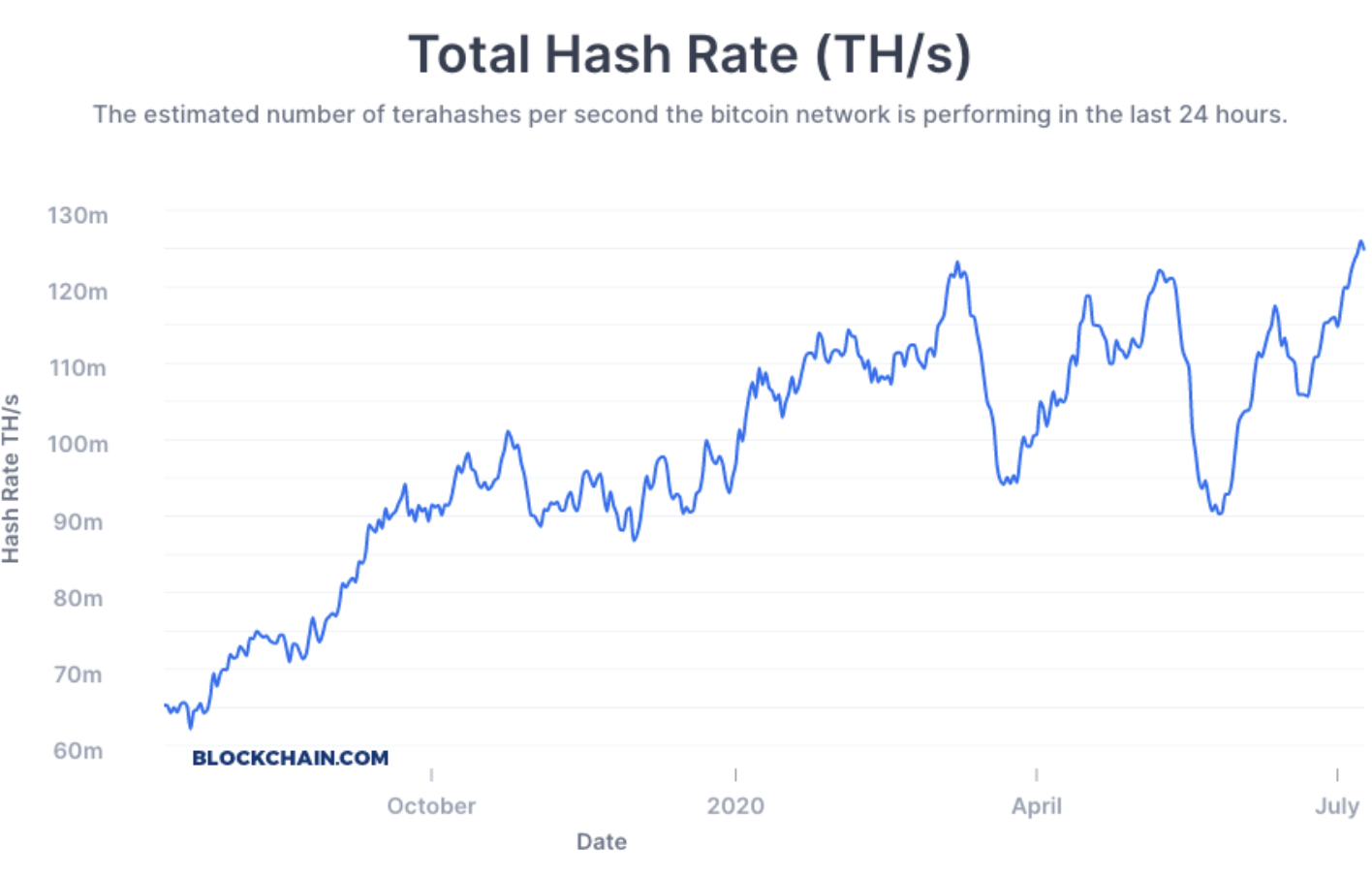 The hash rate is an estimate of how much computing power miners are allocating to processing BTC transactions. A higher average indicates miners have higher hopes for profitability, thereby strengthening the security of the network with their activity.

Street mural rakes in $100 BTC per day in donations

Artist Pascal Boyart is proving the benefits of Bitcoin with his new mural in Paris, named “Confessions of a Red Jester”, a modern interpretation of the 1862 painting “Stańczyk” by Jan Matejko. 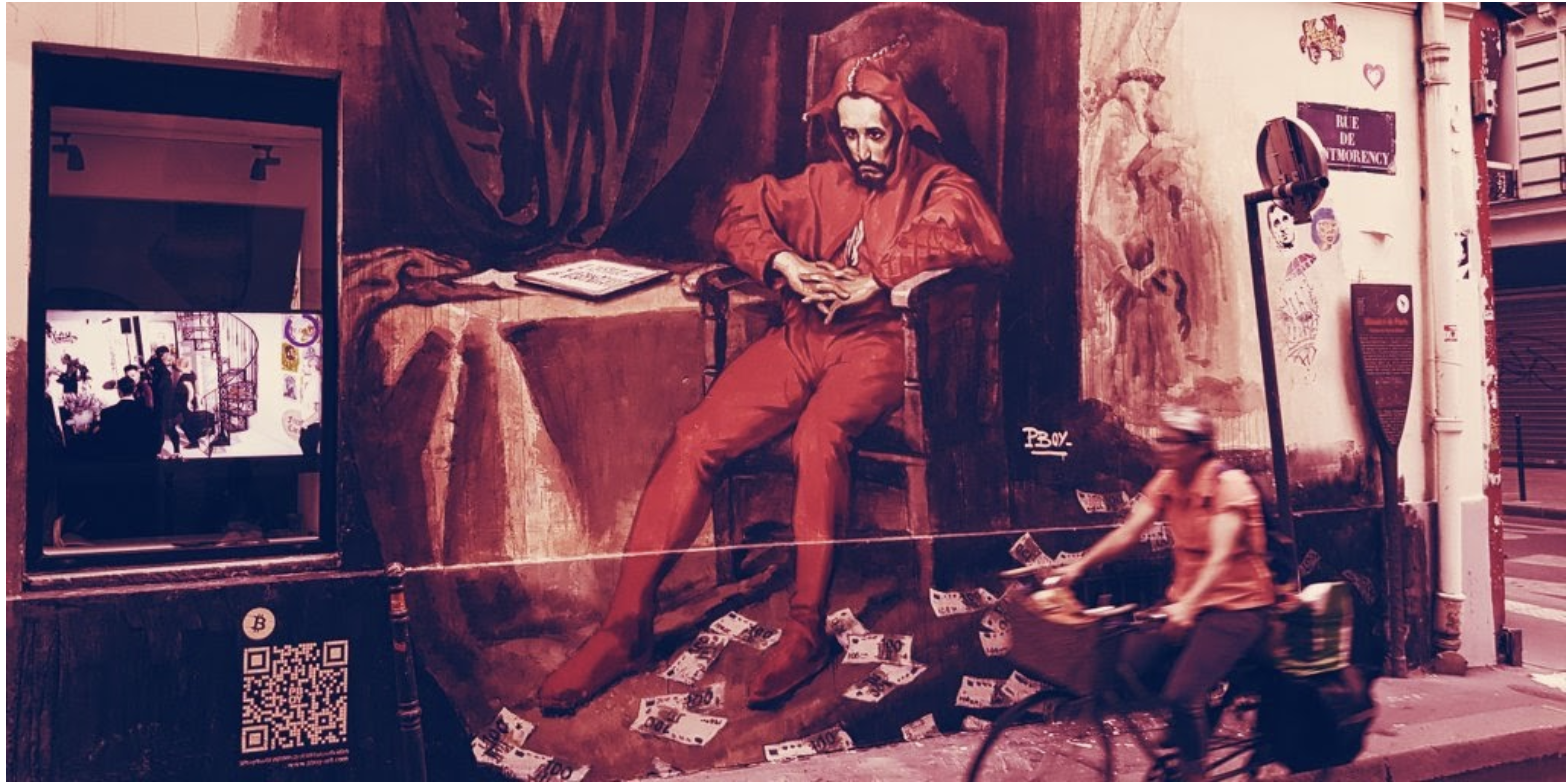 (Above: Confessions of a Red Jester by Pascale Boyart)

Boyart’s rendition depicts the jester surrounded by fiat money notes on the ground with what appears to be a tablet on the table next to him. Boyart indicated the painting represents the falling of fiat money and governments’ quantitative easing schemes. The two thematic elements are hotly debated in the context of crypto and the currently bleak global economic outlook.

My new mural with a #Bitcoin QR code for donations is just finished!

It can be seen in rue de Montmorency, Paris 👀 Hurry up before it disappear!#Crypto #qrcode #Art #painting #pboy pic.twitter.com/YhmkBBOR8u

Arguably the most unique element in the mural though, is a large QR code in the lower-left corner. Accompanying the code is a spray-painted Bitcoin logo and a wallet address. The QR code allows anyone who scans it to donate Bitcoin directly to Boyart void of any intermediary.

Boyart tweeted on 9 July that he’s received 0.0514 BTC since first revealing the artwork just over five days ago. He told Decrypt he’s used QR codes on his paintings since 2017 and has received more than 1.3 BTC (~ $12,000) in donations over the past three years. The crypto savvy artist also wrote a tutorial to help other artists do the same.

Additionally, he’s tokenised his own artwork as non-fungible tokens (NFTs), selling a number of pieces that have been split into collectable fragments via OpenSea.

He told Decrypt, “It helps me to fund my next murals and keep my independence.”

A fork of the popular privacy-centric and crypto-powered web browser, Brave, has been forced to change its name after facing legal threats.

Braver, which forked from Brave in June 2019, is now named Bold Browser. The issue arose from the fact “Braver” looks and sounds too much like “Brave”. Which seems fair.

Due to legal threats sent to one of our community members by a certain party, specifically looking to harm them financially because of what this browser is forked from, we are immediately changing the name and removing all association to "the browser that shall not be named".

Brave CEO Brendan Eich appeared to confirm on his own Twitter that Brave took legal action against the browser formerly known as Braver over trademark infringement.

I'm no longer using @brave browser. BrendanEich and his clown posse sent legal action against a browser that forked their open source code. By the way @BrendanEich - the only usecase for $BAT is dumping it for $LINK https://t.co/ItlQSthGEe

“We defend our trademarks, just as Mozilla and all other trademark holders do,” Eich told Decrypt in a Twitter DM. He continued, “This has nothing to do with open source, which we use for all our browser code, where we welcome pull requests and forks on Github,” he continued. “Open source licensing does not grant a trademark license, the two are legally unconnected.”

Bold Browser launched as a fork of Brave after it emerged the latter was underhandedly redirecting searches to crypto companies like Binance, Coinbase and Trezor to affiliate links that earn the browser a commission.

Dogecoin’s daily trading volume this week soared as high as $27m - 22 times the average in 2020. The reason? TikTok.

Bloomberg’s dubbed it the “Dogecoin Challenge”, in which TikTok users attempted to pump the altcoin to $1 from its sub-penny price. What may have started as a joke resulted in a 600% increase from 6 July to 7 July.

The spike in volumes was coupled with a spike in Google searches as “dogecoin” hit the top popularity score of 100 on 7 July. Visits to the Dogecoin Wikipedia page also skyrocketed, increasing from ~730 views per day pre-Tik Tok to 5,700 on Tuesday. The Dogecoin blockchain also felt the heat – value settled on the network hit a year-to-date high of nearly $20m, close to seven times the average daily value settled on the network.

The TikTok-induced mania has got us eyeing out the impact the platform could have on crypto. Let us know what you think on Twitter.

Bitcoin’s hash rate is hitting record highs but does it even matter?
Cryptocurrency in sport – a match made in heaven? The rise of tokenisation
Crypto in 2020: The year so far