Is Ethereum about to overtake Bitcoin? Not quite, but the coin with the second-highest market cap is gaining momentum. Elsewhere, NFT token sales have hit $100 million, the IRS is looking for crypto experts to help them trace privacy coin payments, and more.

Keep reading to get all the details.

According to a new metric from German site, The Blockchain Center, Ethereum is more than halfway towards overtaking Bitcoin. 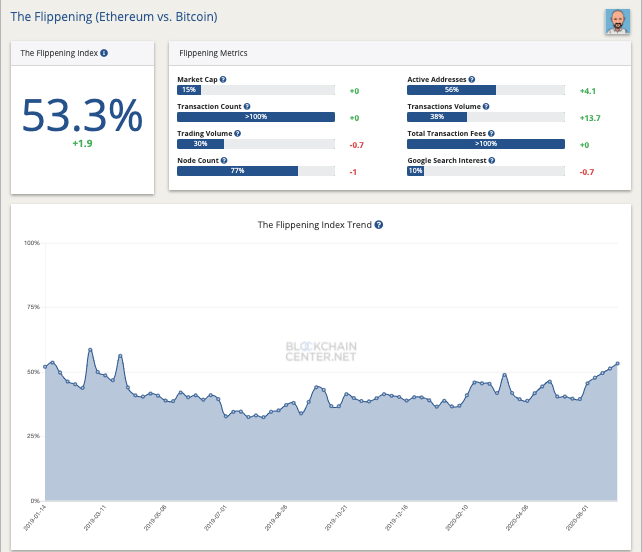 Originally, the flippening referred to Ether’s market cap relative to Bitcoin, but given Ether is at just 14.9% of Bitcoin’s market cap, it still has a long way to go in surpassing BTC.

The Flippening Index is designed to be a more thorough comparison, weighting the average of eight other indicators in the hopes of providing a better overall metric of the use of, and interest in, the two blockchain networks.

According to the site, “The term Flippening refers to the possibility of Ethereum (ETH) overtaking Bitcoin (BTC) as the biggest cryptocurrency. Initially, it described the hypothetical moment in the future when Ethereum overtakes Bitcoin by market cap. This tool takes that concept a step further and looks at the long term trend of eight different metrics, that show the status of both networks.”

In a post on Reddit, Blockchain Center’s Holger Rohm, the designer of the metric, explained why he weighted all the metrics: "I thought about weighing market cap twice, since that's what it was all about initially, but how should I weigh without it being arbitrary?"

Ethereum currently leads on just two of the eight indicators – transaction count and transaction fees. Despite lagging behind Bitcoin with 37.8% of BTC’s dollar-denominated transaction volume, the site notes Ethereum would be “way ahead” if the metric included the value of ERC-20 tokens and stablecoins transferred on the network.

Ethereum has 56.4% of Bitcoin’s active addresses, accounting for just under one-third of the exchange trading volume, and only 10.4% as many Google searches as Bitcoin.

The address was classified as the richest among non-exchange BTC wallets back in April when it was holding 0.55% of all existing Bitcoin at the time. When compared to major exchanges, it ranked third – behind Huobi and Binance.

Funds belonging to exchanges are made up of customer funds. It’s unclear in this instance who actually owns the Bitcoin in this address. It’s been suggested it could be an exchange wallet or belong to large Bitcoin investors, like the Winklevoss twins.

According to Decrypt, a Redditor claimed the wallet belongs to crypto exchange BitStamp via custodial platform BitGo. Upon reaching out to both companies, Debra Bar, director of marketing at Bitgo responded with “For privacy reasons, we cannot confirm clients or their addresses.”

The funds were then sent to more unknown wallets. According to Bitcoin block explorer Blockchain.com, the recent $933 million transaction was split between two anonymous receiving wallets. The first received 5,000 BTC ($45.8 million) while the rest received 96,857 BTC ($887.4 million) as “change”. According to BitInfoCharts, the larger wallet is now the second biggest Bitcoin wallet, trailing only Huobi’s cold storage wallet.

The original wallet was first funded on 1 April this year through a similar transaction, and very little of its BTC had moved until now.

Total sales of blockchain-based non-fungible tokens (NFTs) have exceeded $100 million for the first time since their inception in 2017. Non-fungible tokens have gained legitimacy as representations of collectables, artworks and virtual land parcels, with the potential to grow into a trillion-dollar industry.

Andrew Steinwold, partner at Polynexus Capital emphasised their potential, pointing to the rapid growth as a sign of things to come. Referring to the $96,186,581 worth of NFTs estimated to be sold according to nonfungible.com since 2017, Steinwold wrote in Bankless: “The above stats show just how early we are in a market that one day could be worth trillions of dollars.”

NFTs differ from normal crypto tokens in that each token is unique. A transaction currency, like Bitcoin, relies on fungibility to ensure each unit of exchange is the exact same, whereas NFTs require the opposite. They make it possible for crypto users to store unique information on their tokens, like an in-game weapon, a virtual land deed, or any other form of digitised blockchain collectable.

According to Steinwold, blockchain collectables account for the majority of NFTs sold between 2017 and 2020, at over $37 million. In this instance, collectables are classified as any tokenised asset with little to no functionality. Examples include CryptoKitties, CryptoPunks, and Avastars.

Alibaba at the forefront of blockchain patent race

According to a new report from the China Patent Protection Association indicates that multinational Alibaba leads the world in patents awarded for blockchain-related technology.

The 2020 Blockchain Global Patent Authorisation Report indicated there are 3,924 awarded patents for blockchain tech to date. US firms account for the majority at 39%, Korea has 21%, while China comes in at 19%.

Alibaba leads the pack of individual firms with the most patents, with a current total of 212 awarded blockchain patents, while IBM has 136. South Korea’s Coinplug comes in third for patents granted with 107 in total. Tech giant, Tencent has 42.

2020 has been lauded as a record-breaking year for blockchain patents with 1,257 confirmed (as of May 2020) by patent offices worldwide. In 2019, only 1799 patents were awarded for the entire year.

The report also showed how many patents from large firms have been awarded in jurisdictions other than their own. 126 of Alibabab’s 212 China-awarded patents have also been confirmed in the US, while 80 of IBM’s US-granted patents have been confirmed in China. On the whole, 59% of all blockchain patents awarded in China also have a parallel award in a foreign jurisdiction.

Over the past couple of years, there’s been a so-called race as firms in China and the US file for patents to make a claim to their blockchain-related tech. Notably, blockchain patent filings have an infamously high failure rate. Forkast Insights indicated in the China Blockchain Report that over 10,000 blockchain-related patents have been filed with the China National Intellectual Property Administration as of late 2019, but only a fraction were actually awarded.

In part, the reason for the astonishing number of blockchain patents filed (and patents filed in general from China, the world’s largest filer) is that the government subsidises the application process. This incentive structure alleviates the financial burden, but also creates a high noise-to-signal ratio and is why non-resident companies (which are awarded 68% of patents filed, versus 26% for residents) have a higher success rate for patent applications across all industries.

Additionally, there are 35,000 “blockchain” companies registered in China, but many, according to Forkcast, are simply shells attaching the word “blockchain” to their name to bolster their SEO for investor interest. Of the 35,000 firms, only 730 have a government-required blockchain service number meaning that less than 2% of blockchain companies in the country are doing what their name implies.

The US Internal Revenue Service (IRS) announced a call for information about potential tools able to track different types of cryptocurrency transactions as part of an investigative pilot programme.

The IRS’ desire to hone in on its investigative abilities is no secret; it was among a group of agencies seeking more funding from Congress to fuel these kinds of expansions.

The agency detailed their pilot programme and published their request for information on 30 June. According to the document, the pilot features several areas of focus ranging from privacy coins and layer-2 transaction protocols like the Lightning Network. Prospective bidders have until 14 July to submit their responses.

The agency emphasised that such tools would provide investigators with the resources to counter the inherent anonymity associated with the transactions it traces.