Is this the end for Twitter? This week saw hackers hijack an array of high-profile figures’ accounts, including former presidents and tech giants. Fortunately, they didn’t bother starting World War 3 and instead decided to carry out a pretty rudimentary crypto giveaway scam. The hackers didn’t get away with much, but the chaos it wrought could have long-standing implications for the micro-blogging giant. And what could all that publicity mean for Bitcoin? We take a closer look.

It was better news elsewhere for internet giants, PayPal. After recent rumours, they revealed they’re developing crypto capabilities. Elsewhere, Greyscale reported record-breaking inflows from Q2 this year, and is UK thinking about a digital currency.

What a time to be alive – keep reading for all the juicy details.

On Wednesday evening, a number of high-profile Twitter accounts were targeted in the most wide-reaching attack ever seen on the platform – or likely, any social media site.

The accounts in question were used to share a variety of crypto giveaway scams, often commenting on each other’s posts to lend credibility. So far, the damage seems to have been fairly minimal as it was a fairly obvious phishing attempt, although the address linked to the scam appears to have received around 12.86 BTC (~$117 280).

It started with crypto-centric accounts, with hackers obviously thinking exchange users were their best chance of making a fast SAT. Binance, its CEO, Changpeng “CZ” Zhao, Genesis, and Coinbase all fell victim, with many of the tweets sharing the same dubious message: “We have partnered with CryptoForHealth and are giving back 5000 BTC to the community.” 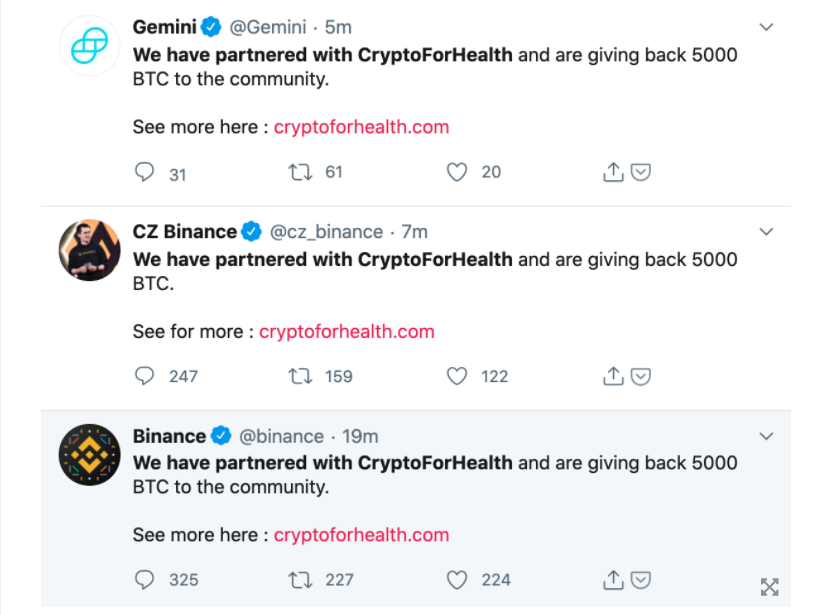 As things progressed, Twitter moved to prevent that specific message from being tweeted. After that, a broader array of accounts were used to spread the giveaway scams, posting direct BTC addresses rather than sharing a link to a dedicated website. Some notable hacked accounts include Former President Barack Obama, media-mogul Michael Bloomberg and entrepreneur, Elon Musk, among a host of others.

The tweets have all since been deleted. It’s still unclear as to the source of the attack, though speculation has centred around Twitter’s platform having been compromised in some way – potentially through an employee.

We detected what we believe to be a coordinated social engineering attack by people who successfully targeted some of our employees with access to internal systems and tools.

We know they used this access to take control of many highly-visible (including verified) accounts and Tweet on their behalf. We’re looking into what other malicious activity they may have conducted or information they may have accessed and will share more here as we have it.

Once we became aware of the incident, we immediately locked down the affected accounts and removed Tweets posted by the attackers.

An unverified Instagram account named “cryptoforhealth” posted a story saying: “It was a charity attack, your money will find its way to the right place.” It’s unclear whether or not the message comes from the real hackers, but this was certainly not the last we’ll be hearing about it.

Don’t get caught out by a crypto scam. Read this article to learn how to avoid phishing attempts.

PayPal has revealed that it’s developing cryptocurrency capabilities. In a letter to the European Commission published this week but sent in March, the payments giant said it’s “monitoring the evolution of the crypto-asset space” and has taken “unilateral and tangible steps to further develop its capabilities in this area”.

The letter was sent as a response to the European Commission’s public consultation on building a European Union framework for markets in crypto assets. It details PayPal’s admission to “continuously monitoring and evaluating global developments in the crypto and blockchain/distributed ledger space”, emphasising it favours a “harmonised” regulatory approach that won’t stifle innovation. It added that blockchain and crypto-assets could help achieve “greater financial inclusion and help reduce/eliminate some of the pain points that exist today in financial services.”

PayPal indicated: “Any regulatory framework in Europe should strive to be technology neutral to support innovation and competition in this fast-evolving space.” Currently, it has a license to provide banking and payments services in Luxembourg and serves customers and businesses in 31 European jurisdictions, presenting around 95 million merchants and consumers.

Bailey was quoted as saying: "We are looking at the question of, should we create a Bank of England digital currency. We'll go on looking at it, as it does have huge implications on the nature of payments and society.” He added, “I think in a few years time, we will be heading toward some sort of digital currency.”

Earlier this year, the Bank of England chief cashier and director of notes, Sarah John emphasised it’s crucial for central banks to research digital currencies, referencing the rising competition from the private sector.

"It is absolutely right that central banks think about whether a public sector or private sector would be best to provide a digital currency going forward," Jones said at the time.

According to its Q2 highlights report, the fund’s total inflows for the first half of 2020 now adds up to $1.4 billion across its range of crypto funds. It added that 85% of the money came from institutional investors.

But it’s not all about Bitcoin; in Q2, $135.2 million was committed to the Grayscale Ethereum Trust – marking another all-time high. The firm’s Litecoin and Bitcoin Cash Trusts saw their largest inflow since Q2 2018. Total capital inflow for Grayscale’s various altcoin trusts is up almost 650% in the past 12 months.

Finally, Grayscale reported that since the quadrennial halving, inflows into its Bitcoin Trust in May surpassed the number of newly minted Bitcoins in the same period. The fund manager speculated that this could cause a “reduction in supply-side pressure”, potentially strengthening Bitcoin’s price point.

Grayscale buys way less #Bitcoin than many would think.

Factoring in "in-kind" purchases, Grayscale has only bought 31% of all new bitcoins mined since the halving, far less than the 150%+ many have reported.

This is just one of many misconceptions about Grayscale's trusts.

A Messari report indicated that many of the purchases were “in-kind”, meaning the Bitcoin shares were being bought with Bitcoin. The increasing volumes of the trust didn’t directly equate to people buying an exorbitant amount more Bitcoin, which could explain the crypto’s stagnant price action.

7 times the crypto community inspired us

Research summary: The state of crypto in Africa