The past weekend saw a flurry of news around blockchain technology, with Asia, in particular, blazing a trail. Hong Kong continues to see significant investment in the space, while Tencent has launched a blockchain industry alliance. Find out what happened and more in your weekend recap.

Local news outlet, Securities Times reported last week that the alliance aims to attract 100 members this year, made up of tech companies, industry associations, universities and think tanks. The alliance plans to establish blockchain industry standards and research potential applications for the technology.

The alliance will form three committees: standards, technical and a business ecosystem committee. The standards committee will cooperate with government agencies and other relevant parties in order to develop national blockchain standards.

The technical committee will plan and build blockchain applications, while the business ecosystem committee will drive sales of products developed by alliance members. According to Tencent, it’s estimated that members will increase their business conversation rates by 30%.

Tencent appears to be going all-in on blockchain tech. Last month, it announced it would invest $70 billion over the next five years in technology infrastructure. The company also recently launched a blockchain accelerator, mentoring 30 firms in the space.

Additionally, the company is one of the top blockchain patent filers, having filed over 700 applications in 2019. China’s national blockchain committee also includes Tencent executives.

China’s biggest crypto mining conference takes place every year in May. This year, it welcomed hundreds of crypto miners for a few days of networking at its Global Mining Forum in Chengdu. Attendees ranged from mining rig producers to mining farm managers, plus an influx of asset managers and exchanges.

According to reports, this year’s conference, which took place just a month after Bitcoin’s halving event, was well-attended. Here are two key trends from the event.

Mable Jiang, Principle of Multicoin Capital said: “The conference made it even clearer that financialisation is an unavoidable trend in the mining sector. Just look at FTX – they’ve launched a hashrate derivative trading tool that allows miners to hedge against mining difficulty.”

The Bitcoin mining industry has evolved tremendously in recent times. New trends include a wave of “influencers” coming from companies that provide financing, hedging and derivative services to miners.

Following the Bitcoin halving, which saw a 50% decrease in mining rewards, miners are having to come up with new ways to finance their operations. Molly Mo, head of marketing at Hashkey Hub, a digital asset management platform noted: “As small miners went out of business in recent months, big mining farms can’t meet their quota as easily because normally, small miners join forces with big miners to reduce costs.”

“Compared to a few years ago when only miners participated in the conference, this year, everyone went,” Mo indicated a trend at this year’s conference, which saw a diversification of its attendees following changes to the crypto landscape.

Jiang reiterated the sentiment, “Exchanges were everywhere during the Forum. They have made a fortune from the trading side of their business, and are now pushing aggressively toward mining.”

A significant amount of VCs – mainly Chinese – are also reportedly increasing investment in mining and are drawing up strategies to set up mining farms. Speculation around the influx of investor money entering the mining industry highlights mining as the top of the crypto value chain, along with its potential to consistently produce profits.

Blockchain firms are beginning to dominate Hong Kong’s FinTech sector, accounting for 39% of new firms launching in the country’s FinTech industry last year. According to Hong Kong’s Financial Services and Treasury Bureau, distributed ledger technology (DLT) represents a growing dominant share of the country’s new FinTech firms, up 27% as of 2018.

A report published by Hong Kong’s treasury department provided a detailed snapshot of blockchain’s accelerating growth. Blockchain makes up the fastest-growing segment of the territory’s FinTech industry, with 22 of the 57 FinTech firms launched in Hong Kong over the past year operating with DLT.

Since April 2019, the number of FinTech businesses operating in Hong Kong has exceeded 600. According to the report, eight virtual bank licenses and four virtual insurer licenses were issued.

The report highlights that blockchain is among artificial intelligence, big data, and cloud in making up the technologies driving the massive shifts in Hong Kong’s virtual banking sector. Its treasury noted an acceleration in the emergence of FinTech and blockchain technologies amid the coronavirus pandemic, underpinned by DLTs potential as a more efficient and cost-effective technology solution.

According to a CryptoCompare report, the monthly cryptocurrency derivatives trading volume surged by 30% in May. This new ATH of $602 billion knocked the previous record of $2 billion in March out the park.

Essentially, crypto derivatives are contracts that amass value from the base asset, which is mostly made up of Bitcoin. In Q1 of 2020, it was reported that Bitcoin accounts for 78% of the derivatives market. 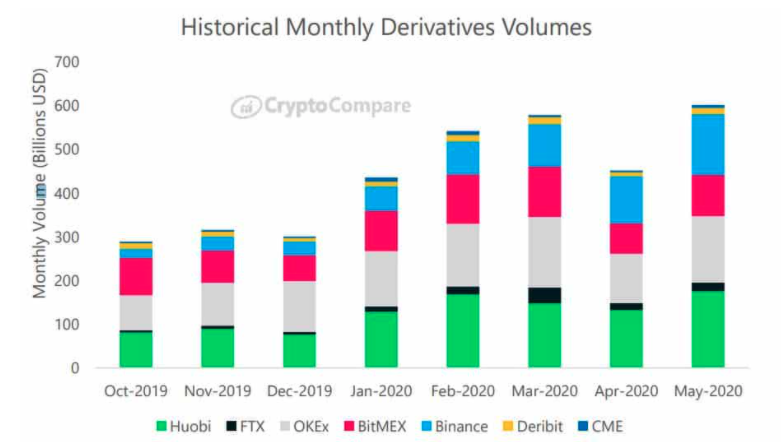 The Federal Reserve Bank of Philadelphia released a June 2020 working paper titled Central Bank Digital Currency: Central Banking for All? in which it examined the potential merits and downsides of CBDCs. The Fed went so far as to suggest that digital currencies could replace commercial banks if they managed to address associated risks.

According to the report: “The introduction of a CBDC can represent an important innovation in money and banking history. Besides its potential role in eliminating physical cash, a CBDC will allow the central bank to engage in large-scale intermediation by competing with private financial intermediaries for deposits (and, likely, engaging in some form of lending of those deposits.)”

The working paper focused heavily on any potential implications CBDCs could have, were they to compete with traditional commercial banks. In the paper, it asserted: “the central bank cannot invest in long-term projects itself, but instead has to rely on the expert knowledge of investment banks to do so.”

A key consideration here is around how CBDCs would disrupt this particular system, to which the Fed concluded with: “We have derived an equivalence result that shows that the set of allocations achieved with private financial intermediation will also be achieved with a CBDC, provided competition with commercial banks is allowed, and depositors do not panic.”

The report warned that central banks will have to be “careful in its choices to avoid creating havoc with maturity transformation” if competition from commercial banks will be impaired. Maturity transformation is a practice facilitated by financial institutions in which they borrow money on shorter time frames than lending money out. Simply put, they meet the needs of lenders and borrowers by taking on short-term sources of finance, like deposits from savers, and turn them into long-term borrowings, like mortgages.