What a week for crypto – between the aftermath of the Bitcoin halving and crypto Twitter’s shocking effort to teach J.K. Rowling about Bitcoin, it was anything but boring. Keep reading for the best the crypto world had to offer this past weekend.

Harry Potter author, J.K. Rowling took to Twitter on Friday evening to ask for an explanation of Bitcoin. Crypto Twitter’s uncoordinated and fumbled response made for some unconventional but legendary Friday night entertainment.

I don’t understand bitcoin. Please explain it to me.

This started as a joke, but now I’m afraid I’ll never be able to log in to Twitter again without someone getting angry I don’t own Bitcoin. One day you’ll see a wizened old woman in the street, trying to trade a Harry Potter book for a potato. Be kind. She did try to understand.

It’s unclear if respondents were competing for the cringeworthy response, but things got awkward pretty quickly. Arguably two of the most embarrassing tweets came from Coinbase CEO Brian Armstrong and Binance CEO Changpeng “CZ” Zhao.

First, both Coinbase CEO Brian Armstrong and co-founder of Gemini Tyler Winkelvoss made the mistake of responding to an account impersonating J.K. Rowling who falsely announced “she” had just made her first Bitcoin purchase.

The CEO of Coinbase responded to a fake JK Rowling tweet and encouraged it to buy shitcoins pic.twitter.com/cy1zo2yCZZ

If anything, we hope everyone’s learnt to verify an account’s handle before potentially shooting themselves in the foot. And finally, on behalf of the crypto community, we sincerely apologise to J.K. Rowling for the poor effort. Buy Bitcoin though! Better luck next time!

US-based venture capital firm Andreessen Horowitz released a report on 15 May analysing cryptocurrencies during three cycles, peaking in 2010, 2013 and 2017. This comes after the firm released videos from its online “Crypto Startup School”, a seven-week course that ran until mid-April this year.

According to the report, the compound annual growth rates (CAGR) from 2010 to shows that far from being the volatile asset many claim it to be, crypto has actually shown “choppy yet consistent growth in all of [these] key metrics.” 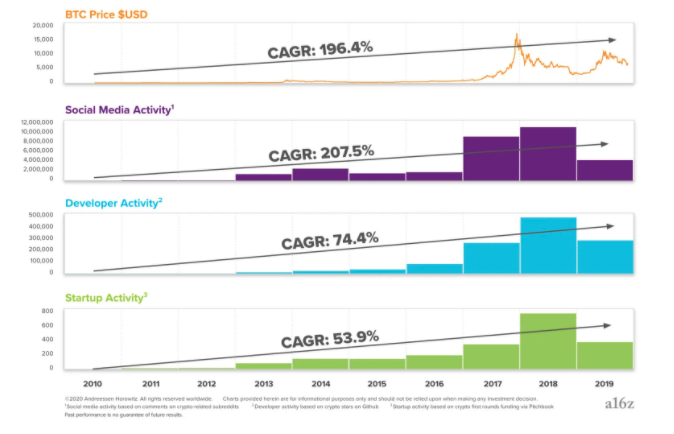 The report notes that “The 2017 cycle spawned dozens of exciting projects in a wide range of areas including payments, finance, games, infrastructure, and web apps”.

The firm explained that the innovative ideas pushed in the latest cycle have the potential to create a “fourth crypto cycle”, which could see a comparable increase in social media, developer, and startup activity as the price of BTC goes up.

“Even though crypto cycles look chaotic, over the long term they’ve generated steady growth of new ideas, code, projects, and startups — the fundamental drivers of software innovation. Technologists and entrepreneurs will continue to push crypto forward in the coming years. We are excited to see what they build.”

Trading volumes and open interest in CME Group’s Bitcoin options product has surged since the having event last Monday, which saw the number of Bitcoin produced with each transaction block fall from 12.5 BTC to 6.25 BTC. CME - Wall Street darling and arguably one of the largest exchange groups in the world - launched its Bitcoin options product at the beginning of the year.

A recent CME blog post indicated this year’s halving was unique in relation to previous ones given the size of the derivatives market and the availability of options and futures on regulated US exchanges. Options can be used by miners to hedge their exposure in spot Bitcoin. They can also use options to earn additional income.

Payal Lakhani, the firm’s director of equity research and product development said: "A robust options market could also allow for additional income to be earned by miners or enhance long bitcoin positions which would further cushion the impact of the upcoming halving. With the emergence of a healthy options market, investors can take price signals and consensus estimates about market expectations." 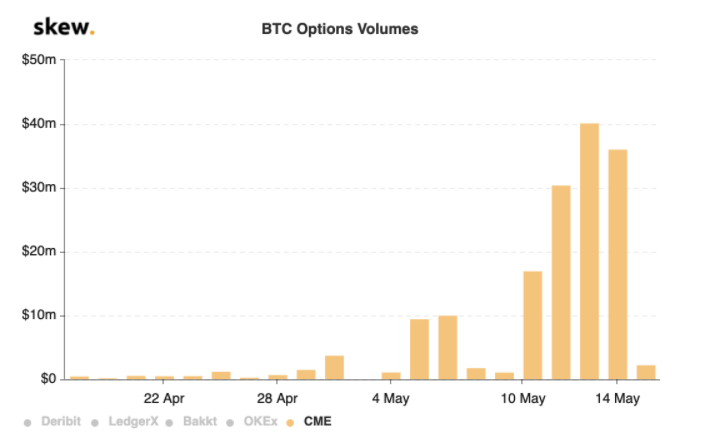 Up until the halving, trading volumes and open interest for CME’s Bitcoin options product was minimal. Open interest, classified as the total number of outstanding derivatives contracts, skyrocketed from $35 million on 11 May to $142 million on 14 May, as indicated by Skew. The number of contracts traded also hit a record high of 878 contracts on 13 May. According to Skew, this represents $40 million worth of trading volumes. Contextually, rival firm Deribit traded $116 million on 13 May.

Traders speculate that the new action in CME’s Bitcoin options is as a result of both miners and new institutional entrants to the market. CME revealed that 256 new accounts have begun trading the product since the start of May. Derivatives expert and Skew founder, Emmanuel Goh said rising institutional adoption of the product is driving growth.

Richard Rosenblum of GSR Trading said the halving, along with the current pandemic and bleak macroeconomic outlook, could have brought in new professional investors and traders who are more likely to trade futures on CME.

"The timing of the halving coinciding with the pandemic undoubtedly helped investors like [Paul Tudor Jones] come in, and others will follow," Rosenblum said. "Institutions following PTJ are more likely to trade on CME."

CME announced despite new derivatives launching at rival firms, it is not preparing to launch new products tied to the crypto market at this time.

"At CME Group, our innovation process starts with our clients – listening to their feedback so we can create products and solutions to help them manage their risk. While we are continually talking to our clients about ways to meet their needs, we have no plans to launch additional cryptocurrency products at this time."

Thursday’s dip, the lowest it has been since December, was likely due to the Bitcoin halving which saw mining rewards drop from 12.5 BTC to 6.25 BTC per block. This meant that less powerful miners were taken offline due to a lack of profitability.

Bitcoin’s mining profitability dropped to lows of $0.07 per hash on Wednesday, previously unseen since March. Currently, it’s at $0.08 per hash.

On the day of the halving, Bitcoin’s hash rate hit 138 exahashes per second – the highest it’s ever been – as miners rushed to get as much out of the network before the block reward halved.

Experts believe the post-halving dip in the network’s hash rate was to be expected and should be temporary. However, Denis Rusinovich, operator of a mining farm in Kazakhstan said the price of Bitcoin was unexpected, allowing older miners to stay in business for longer than anticipated. “[It] was generally expected by miners that overall drop will be around 30%, but clearly one major driver that no one could expect is BTC price level. That gave additional support for less efficient miners to stay afloat the last two weeks,” he said.

If the price dips again, even powerful computers could struggle to turn a profit.