The world is a weird place right now. Drinking wine at 10am is somehow respectable (needless to say, we don’t endorse it) and news presenters have stopped wearing trousers (which we do endorse). More importantly, central banks around the world are printing more money than ever before. And the internet is dealing with this the only way it knows how. MEMES.

But before we get into those, let’s put our macroeconomic hats on and try to understand the mysterious realm of monetary policy and what’s actually going on – specifically, around quantitative easing.

What is quantitative easing (QE)?

To do this, central banks purchase government bonds and other securities from banks and financial institutions. The goal here is that, through buying government bonds from banks, the supply of money in the economy will increase. Banks that were previously holding bonds are now holding cash. Now that banks have more money, they have more to loan out to businesses and consumers. Theoretically, this should increase liquidity and investment within the economy, thereby stimulating economic growth.

That depends on who you ask. This isn’t the first time in history governments and central banks have taken such drastic measures, but it’s very difficult to compare successes or failures when the contexts differ so widely.

Generally speaking, QE has the potential to devalue a domestic currency. In the case of manufacturers, QE could help stimulate growth as exported goods would be cheaper in the global market. But a declining currency value makes imports more expensive, which could lead to an increase in the cost of production and consumer prices.

In a worst-case scenario, central banks could cause inflation through QE without any economic growth, leading to a period of “stagflation”, otherwise known as recession-inflation. This occurs when the inflation rate is high, economic growth slows, and unemployment remains steadily high. This presents a catch-22 for governments as any other economic policies intended to lower inflation could drastically increase unemployment.

Currently, with lockdown measures in effect at varying degrees across the globe, it’s expected that almost all real-world economic activity will or has already come to a grinding halt. Even if people can borrow more money thanks to QE, they’re unlikely to use it to make purchases that’ll prop up the economy in a meaningful way.

Even those who facilitated QE in the past have spoken up about the undesired effects QE programs have had. Alistair Darling was Chancellor of the Exchequer when QE was first introduced in the UK. Incidentally, he’s also the very same person referenced by Satoshi Nakamoto in the encrypted message which appeared in Bitcoin’s Genesis Block. He has since said that QE was meant as a “short-term shock therapy”, implying it’s an unworthy sustainable solution. Nicholas Macpherson, the permanent secretary to the UK Treasury from 2005 to 2016, meanwhile, went so far as to tweet: “QE like heroin – need ever-increasing fixes to create a high. Meanwhile, negative side effects increase. Time to move on.”

QE like heroin: need ever increasing fixes to create a high. Meanwhile, negative side effects increase. Time to move on.

What does this mean for Bitcoin?

Quantitative easing was all the rage when Satoshi Nakamoto first introduced his idea of a peer-to-peer, decentralised currency. Following the financial crisis in 2008, central banks around the world were looking for creative new ideas to try and drag the economy out of its funk, and QE was what they came up with.

There are some important differences between the situation back then and now. First, this economic downturn is partially due to a factor we have no control over: COVID-19. Second, the amount of money being pumped into economies now is considerably more than before. Third, people all over the world now have easy access to a digital currency without the inextricable ties to government. If the government’s solution to the 2008 financial crisis was quantitative easing, Satoshi’s was Bitcoin – the key difference being that we have control over Bitcoin.

The government, however, is turning to QE again. On 12 March, the US Federal Reserve made a historic announcement that it planned to implement up to $1.5 trillion in asset purchases as an emergency measure to provide liquidity to the US financial system. On 23 March, it announced that quantitative easing would be unlimited. Since then the Federal Reserve has printed trillions of money, pretty much out of thin air.

It’s difficult to quantify these kinds of numbers, making it very easy for them to fly straight over our heads without even lingering on the brain for a moment.

We’re living through a moment of great economical irony. As the Fed pumps more money into financial markets, Bitcoin is set to undergo a halving of mining rewards by 50% sometime in May, causing the Bitcoin-Fed monetary policy divergence to widen even further. Leading experts believe Bitcoin may benefit from QE’s Cantillon Effect. The Cantillon Effect is the change in relative prices resulting from a shift in the money supply. Omkar Godbole of Coindesk explains, “It argues that money injection (QE and other inflation-boosting policies) may not change an economy’s output over the long-term. However, as newly created money travels through the economy, it affects different sectors of the economy differently.”

Paul Marshall, co-founder of Marshall Wace, one of Europe’s biggest hedge funds, also outlined in the Financial Times in 2015 how QE benefits certain sectors far more than others. “Banks have been the biggest beneficiaries. Asset managers and hedge funds have benefitted, too. Owners of property made out like bandits. In fact, anyone with assets has grown much richer.” On the flip side, for younger generations typically assumed to have fewer assets, this era of unprecedented central bank stimulation has only perpetuated increased job insecurity, rising real estate prices and a widespread bloating of financial inequality. 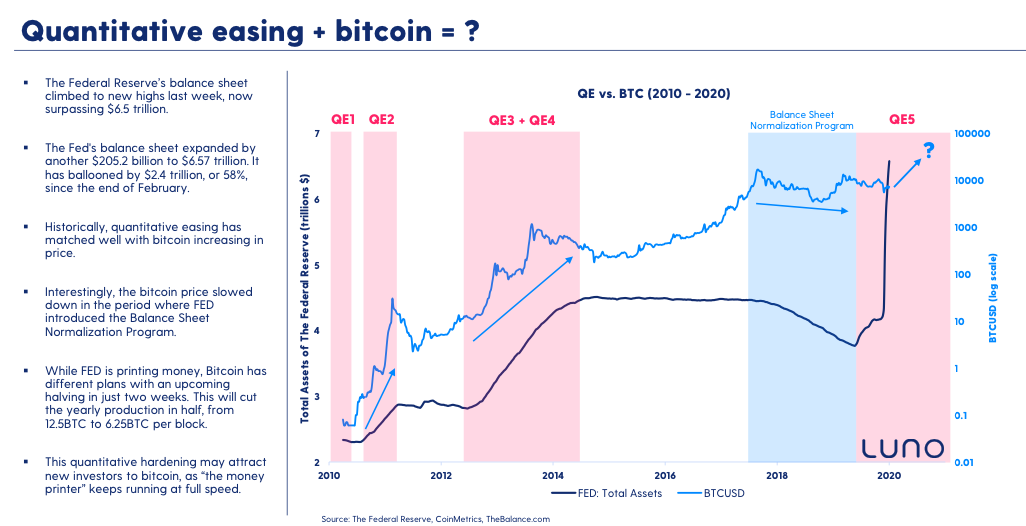 Coindesk, for one, is bullish. They recently reported that “Another enormous program of QE ought to benefit Bitcoin, both in terms of its reputation as a hedge against centralised changes to the financial system, but also directly, as asset prices gradually rise across the board.” Simon Peters, a market analyst at eToro shares their sentiment that investors will be looking toward assets like Bitcoin. He points out that “Holding cash is not beneficial in these circumstances because the currency has been devalued and you are losing purchasing power so where do you put it? That is potentially where the likes of Bitcoin and other crypto-assets may see the benefit.”

Will Peters be proven right? Will investors look to diversify their investments into something deflationary, like Bitcoin? Let us know on Twitter.