Society is at a turning point. Inequality has been growing for decades, with the world’s richest 1% today owning 45% of its wealth. Many countries are missing out on the benefits of a developed and inclusive financial system, and emerging markets are increasingly struggling to keep up. But to what extent can crypto solve their problems and increase financial inclusion? Are emerging markets ready to take advantage of the potential benefits on offer? 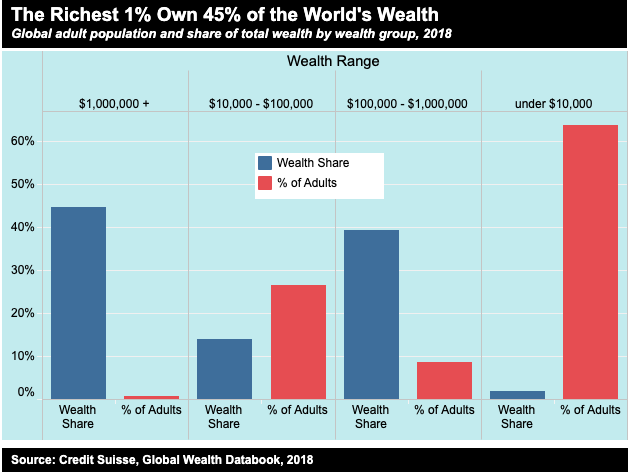 The issues faced by emerging markets in the financial sector can often be traced to historical structural inequalities. As the rest of the developed world continues to grow and innovate, many emerging economies are still struggling to overcome the very basic issues that their developed counterparts dealt with decades, or centuries ago. They are beset by poor corporate governance, weak legal and judicial infrastructures, and limited access to reliable information.

This results in opaque financial systems that are prone to corruption. In a Bank of International Settlements (BIS) report on financial stability in emerging markets, it was claimed that the lack of transparency about banks’ operations and financial conditions makes it difficult for stakeholders to exercise proper market discipline. The lack of effective management and political interference also makes it difficult for banks to exercise prudence in the loans sector, dragging people into debt they are unable to get out from under of.

Poor market structures and political instability also mean that it is not uncommon for emerging markets to experience low foreign investment and trade. Investopedia notes that “Investors who seek a fair, competitive business environment will avoid investing in countries where there is a high level of corruption.” Poor education and limited access to adequate healthcare are also often serious problems within emerging markets–these, too, have a direct, serious impact on the viability for emerging economies to perform.

Disruptive technologies can and have helped to remedy the financial disparity in emerging markets. If we look at the case for Artificial intelligence (AI) being used, the applications are poised to aid a variety of inefficiencies. “Owing to AI’s sophistication, many believe it lends itself better to applications in developed economies. But AI is perhaps even more relevant in emerging markets, which are exploiting the opportunities it creates to produce social and economic gains.” (Frank-Jürgen Richter in The Power of AI in Emerging Markets)

An example given in Project Syndicate speaks to the use of AI-enabled systems used in villages in Indonesia and Kenya, which are making it easier for small entrepreneurs and farmers to gain work more efficiently. They note that, “Across emerging economies, farmers are able to use near-ubiquitous mobile devices to access AI-enabled weather services that provide real-time information on weather, water usage and requirements, soil conditions, and the weather, allowing them to make more informed operating decisions.”

The Internet of Things (IoT) is also having an impact, particularly in healthcare. “According to industry forecasts, around 40% of the global economic impact of IoT applications will occur in healthcare.” (IoT in Healthcare: Improving Care For Those Out of Reach) Wearable devices that are able to transmit personalised, accurate data points allows healthcare providers to make faster, unique and detailed medical decisions.

In terms of financial inclusion, though, there are few technologies having a greater impact than cryptocurrencies.

The potential of cryptocurrency in emerging markets is already being realised to an extent, with high levels of adoption increasingly reflecting this. According to a 2019 Statista Global Consumer Survey, the top five countries in terms of cryptocurrency adoption are Turkey, Brazil, Colombia, Argentina and South Africa. 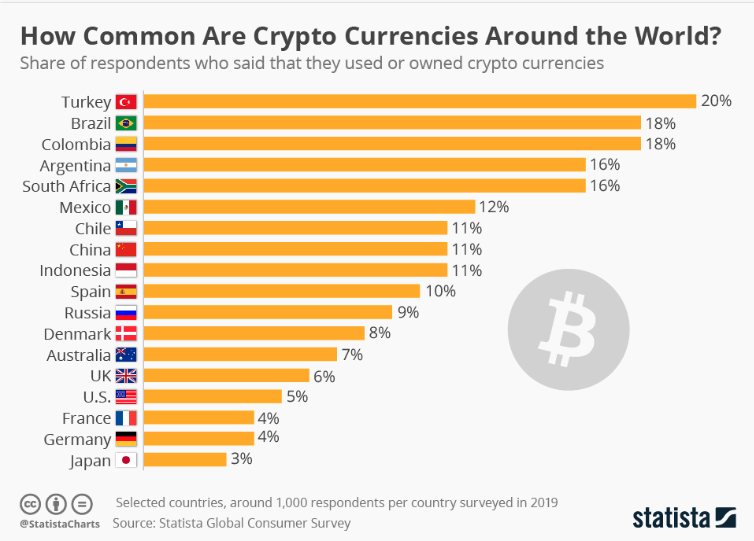 There are a number of reasons for this. Craig Mellow describes the interest in digital cash from the practical perspective of those with unfeasible fiat money options. “To Wall Streeters, Bitcoin may look like tulip bulbs for millennials, but for long-suffering citizens of Venezuela or Zimbabwe, the cryptocurrency is emerging as a lifeline,” he explains. “In those countries, where the currencies really are fiat and hyperinflation eats a paycheck in a matter of days, Bitcoin’s funky, invisible peer-to-peer regulatory backbone can seem safe by comparison.”

Everyone needs access to a stable financial system. Bitcoin may be volatile at the moment, but when you look at the financial landscape in countries like Zimbabwe and Venezuela, ask yourself: what’s worse? Is the risk greater in a devalued fiat currency influenced by a hoard of uncontrollable factors?

In August 2019, Zimbabwe’s inflation rate skyrocketed to 300%, according to new data released by the International Monetary Fund. This is the highest inflation rate in the world. The annualised inflation in Zimbabwe was measured at 175.66% in June, up from 97.85% in May. Venezuela entered hyperinflation in 2016 as the rate increased from 9.02% to 10 million % since 2019, according to the IMF.

It’s important to understand the underlying motivations behind why people may turn to cryptocurrencies–what do they offer that government-issued currencies don’t? Bitcoin, for example, offers:

There’s a range of other benefits, but the above speak directly to emerging market citizens who are otherwise often completely left out of the global financial system. Renowned emerging markets investor, Mark Mobius echoes this sentiment: “There's definitely a desire among people around the world to be able to transfer money easily and confidentially that is really the backing to Bitcoin and other currencies of that type, so I believe it's going to be alive and well.”

Kieran Smith from BraveNewCoin paints a striking image of the global spread within the Bitcoin trading landscape while accounting for these trends as: “Emerging markets win the race for Bitcoin adoption as genuine need outweighs speculation as the driver for peer-to-peer Bitcoin trading”.

According to data from LocalBitcoins, a peer-to-peer Bitcoin marketplace, P2P trading volume in emerging and frontier markets conducted through the site surpasses volume in the developed world. Another interesting data point indicates these volumes are not as responsive to price fluctuations as they are in more developed markets. We can surmise that this is due to the difference in use and applications–instead of using Bitcoin as another investment opportunity, there is a genuine need for a safer, more resistant currency. 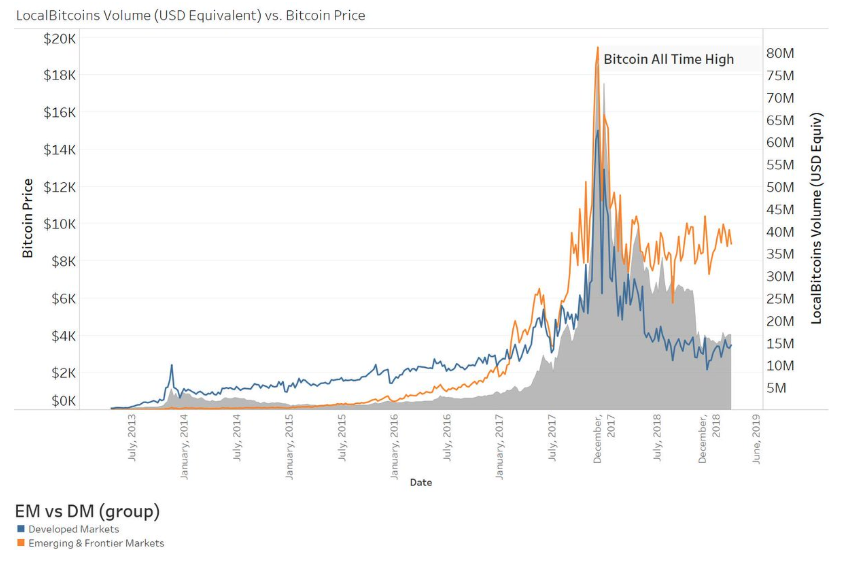 “Russia, Venezuela, China, Nigeria and Columbia are the five countries found to be contributing 80% of the all volume traded in emerging markets through LocalBitcoins. Each of these has its own catalyst for Bitcoin adoption–stretching from currency devaluation, to strict regulation, and lack of alternatives for international remittance.” (Kieran Smith, Brave New Coin)

Out with the old, in with equality

When we look back at the history of the financial system, we’ve got to think about who it was there to serve. Big banks have always been in the business of making money–from credit lending to interest rates. These are not what emerging markets participants are after.

Nick Hill discusses a new narrative for emerging markets and blockchain-enabled finance: “Most of the blockchain and cryptocurrency space has thus far looked at the technology’s implications for solving economic and social problems. [...] The narrative is shifting now in two ways that treat emerging markets not as beneficiaries of global do-goodism but as full market participants.”

He explains the complexity behind emerging market participants’ applications within the crypto space, adding that they can’t all be painted with the same brush. He understands the need for access to the world’s best financial opportunities to which many were denied in part due to “antiquated structures of the financial world.” Equal access is an issue plaguing many of the world’s almost monolithic structures: healthcare, education, finance… The worry creeps in when we realise the more progress is made, the bigger the gap grows.

Technology to the rescue

Emerging markets may, conversely, be better equipped than their more developed counterparts to exploit the benefits of new technology. They don’t have the established, legacy systems built up during previous waves of technological innovation. This means they are more agile and more able to build systems afresh. For example, as Tyler Winklevoss, successful investor and entrepreneur, explains: “A lot of African countries leapfrogged the infrastructure of landline telecoms with cellular. They skipped that step. Blockchain will have the greatest impact in areas where the payment networks don’t exist or are very poor.”

Considering the heavily entrenched nature of older financial systems, in particular, it makes sense that emerging markets are better poised to start from scratch with innovative financial solutions. There’s an advantage to starting with little to no structure as agility and flexibility will win the race in embracing and successfully implementing a digitised financial system.

Tyler Winklevoss has also spoken openly about his criticisms of the traditional financial system, even going so far as to infer banks have little to no economic incentive to serve customers in the lower tier of the pyramid. He believes banks don’t serve most of the world and have no existing plans to serve them.

Traditional banks could be expected to push back on more forward-thinking solutions as they serve as potential threats to high fees and administrative costs that banks currently enjoy. Old-fashioned structural and historical legacies are extremely hard to challenge, change or get rid off, while emerging markets may find success in moving with faster innovation.

When discussing globalisation, the Financial Times echoes this sentiment, “The anti-globalisation sentiments in the West can be seen on the surface in policy. Western countries pursue self-protection as their competitive edge diminishes in today’s world [...].” Perhaps old schools of thought regarding economic growth and policies will cripple the world’s current economic leaders, but history shows stagnation and lack of innovation only leads to decline in this fast-paced, fickle financial world.

Developing nations will use Bitcoin first. Here’s why