It’s been another rollercoaster week in the cryptosphere. Bitcoin’s hash rate hit a new all-time high, John McAfee has ghosted his own ghost project, and more.

Kick back and soak up all this week’s top stories have to offer You’ve got eyes, we’ve got details. Bathe in them.

Federal Reserve Governor Lael Brainard has announced that the US central bank is to partner with MIT researchers in the building and testing of a digital currency.

Brainard revealed the news in a Federal Reserve Bank-sponsored conference, adding that they hope the programme will give them a better understanding of digital currencies. The monetary authority will also explore the potential of offering a digital equivalent of the US dollar.

Brainard emphasised the Fed isn’t ready to issue digital cash yet, saying “a significant policy process is required to even consider a central bank digital currency (CBDC). The research will make use of a “hypothetical” coin oriented to central bank users.

"Given the dollar's important role, it is essential that the Federal Reserve remain on the frontier of research and policy development regarding [central bank digital currencies]," the Fed governor said.

Back in February, Brainard indicated the Fed was looking further into regulations and protections for digital payments and currencies. At the time, Brainard said the new technology could potentially bring “greater value and convenience at lower cost”.

Even as the bitcoin price continues to meet resistance at $12,000, its hash rate is hitting a new all-time high (ATH). According to data from Blockchain.com, on 15 August, Bitcoin’s seven-day average hash rate surged to a new peak of 129.075 TH/s. It’s since dropped slightly down to 125.65 TH/s. This comes after two weeks of relatively stagnant hash rate growth, with the previous record set on 28 July. 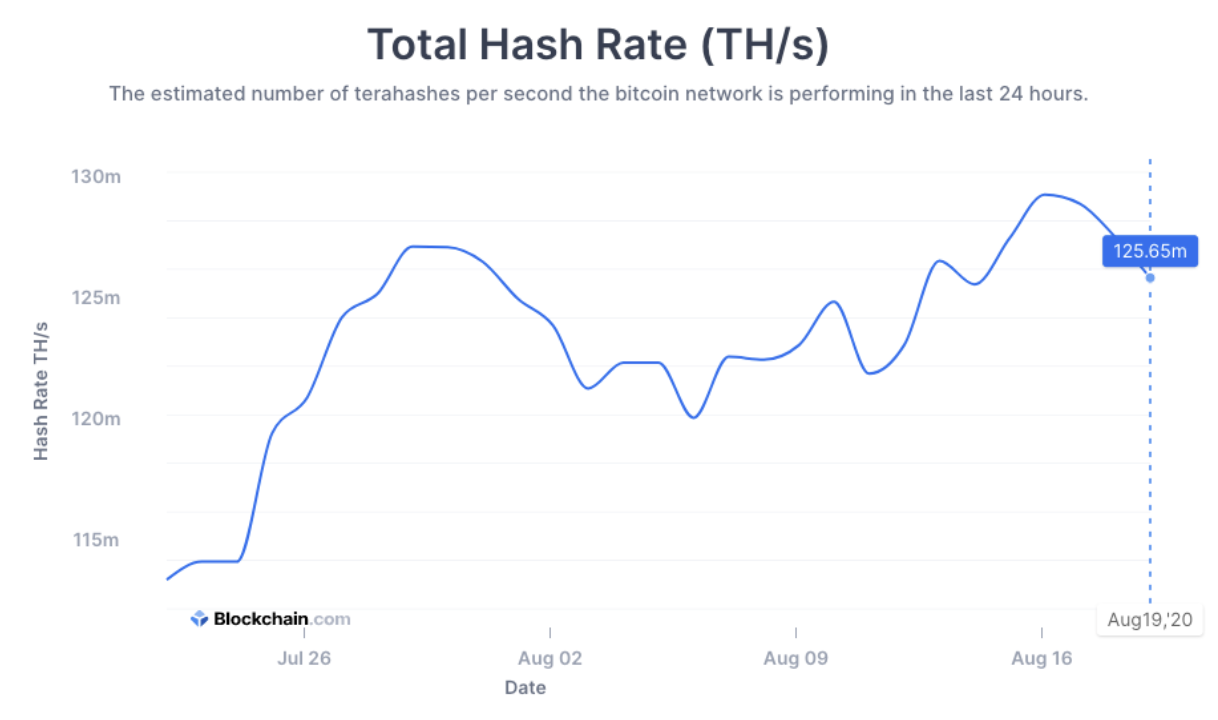 The hash rate is an estimation of the amount of computing power miners are devoting to processing BTC transactions. A higher average indicates miners have more faith in profitability, meaning there’s usually a strong correlation between hash rate and price.

Crypto-friendly Hester Peirce sworn in for a second SEC term

There was more good news for the crypto community as it was announced this week that US Securities and Exchange Commission (SEC) Commissioner, Hester Peirce (aka. “Crypto Mom”), is sworn in for a second term.

Peirce is known for her progressive stance on cryptocurrencies, exemplified by her criticism against the SEC’s rejection of a Bitcoin ETF (exchange-traded fund). She expressed concern that the SEC’s approach “undermines investor protection by precluding greater institutionalisation of the bitcoin market.”

Peirce has long supported crypto regulation, erring on the side of crypto startups behind large ICOs, the controversial fundraising schemes that gained traction throughout 2017 and early 2018. The SEC claimed almost all ICOs constituted an illegal sale of securities under US law.

"[Crypto] is clearly going to be here to stay, and I would like us to set up a regulatory framework that works well for crypto,” Peirce said during her nomination hearing on 21 July.

One of Peirce’s most anticipated proposals is a three-year safe harbour period for crypto ICOs. This would give them time to decentralise since if crypto projects are sufficiently decentralised they might not be subject to US securities law, and would thus avoid SEC scrutiny.

SEC Chairman Jay Clayton said: “Hester has been a tremendous advocate for our markets and investors, and I know she will continue to be a strong voice for them in the years to come."

John McAfee announced his departure from his own privacy asset project, Ghost.

I am abandoning the the $Ghost project. Management is incapable of making a success of the project. It will, without a doubt fail. lI tried to explain the fundamental principles of management, but they fell on deaf ears. My apologies to those that I led astray" Sorry.

After bashing bitcoin for its lack of privacy, McAfee endeavoured to make his own proof-of-stake (PoS) privacy-focused asset, first tweeting about it on 11 April earlier this year. The project raised eyebrows after it became known it had plagiarised content from the white paper of PIVX, another anonymity-focused crypto asset.

McAfee commented on his departure tweet with “Josh is an idiot”, likely referring to another one of the project’s founders. He also confirmed he’ll be removing his two-month-old Ghost tattoo. Ouch.

A representative from the Ghost team commented: “John McAfee is a tech pioneer, a really cool guy, and a loose cannon.” He continued, “GHOST is an open source decentralized project. John can help market GHOST to his network or doesn't have to, but that does not effect the GHOST blockchain whatsoever. John is in no way involved in any day to day operations, nor has he ever been involved with any of the tech or building of GHOST.”

The rep also indicated McAfee’s name would be removed from the project, but assured that the project’s future plans remain as is.

Tether to move 1B USDT coins from TRON to Ethereum blockchain

Stablecoin issuer Tether is moving 1 billion USDT coins (or 8% of its total supply) from TRON to the Ethereum blockchain, today.

Tether CTO Paolo Ardoino said that “a cryptocurrency exchange is willing to swap part of its Tethers from TRC20 to ERC20.” The exchange wasn’t named but speculators believe it’s most likely Binance.

Stablecoin swaps typically occur when users demand to trade on one blockchain instead of another–the decision is usually not made by issuers or exchanges themselves.