Last Friday marked the 10 year anniversary of the infamous Bitcoin pizza purchase – the first time anyone in the world bought a tangible good or service using Bitcoin. On 22 May 2010, computer programmer Laszlo Hanyecz bought two large pizzas for 10,000 BTC, which was at the time equivalent to roughly $41. Today, those 10,000 BTC would fetch you somewhere nearer $90,000,000 – impressive returns. Though we’re sure demonstrating to the world that Bitcoin is a viable means of exchange has been reward enough. 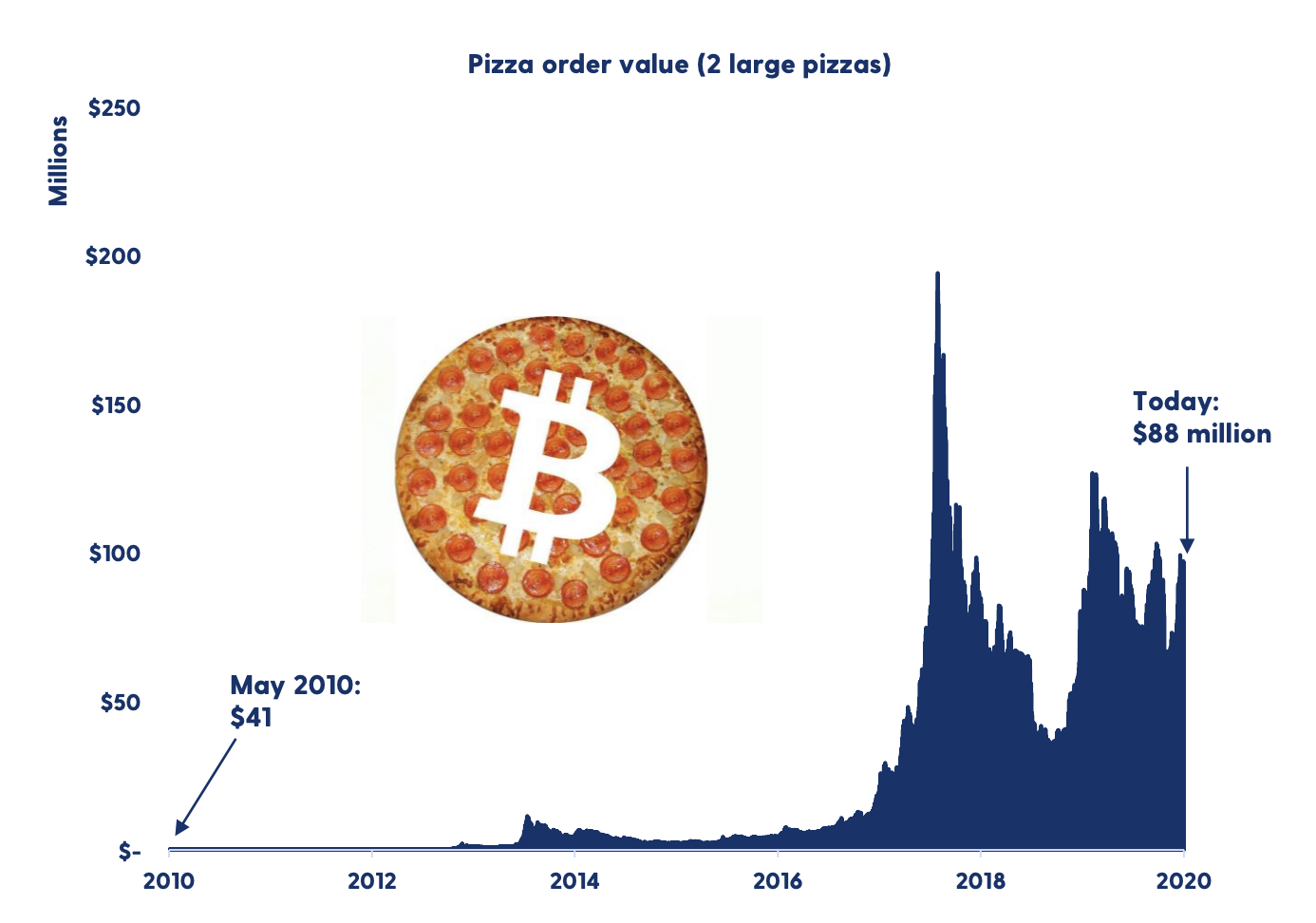 Fittingly, there was another blast from the past last week when a transaction stemming from a block reward dating back to 9 February 2009 moved 50 BTC. This sparked rumours that Satoshi was selling their Bitcoin – a theory that has since been widely disproved as we discuss later in this article. However, after a bullish start to the week, the news did still arguably contribute to a tumble in the Bitcoin price towards the end.

It was better news for altcoins, though. Ether and XRP both had stronger weeks than Bitcoin, albeit still having fallen slightly. The stock market too was relatively flat last week, and it will be interesting to see how crypto deals with a potential pullback as the tension between the US and China increases. 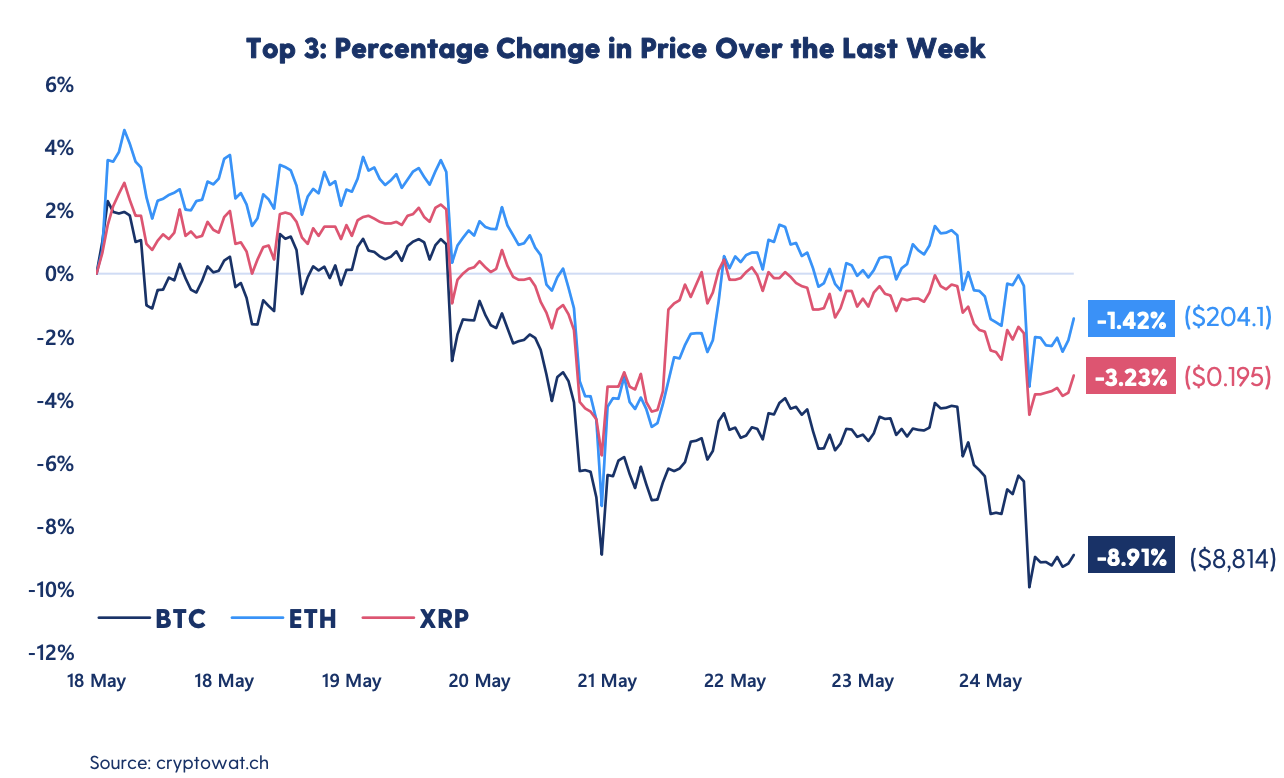 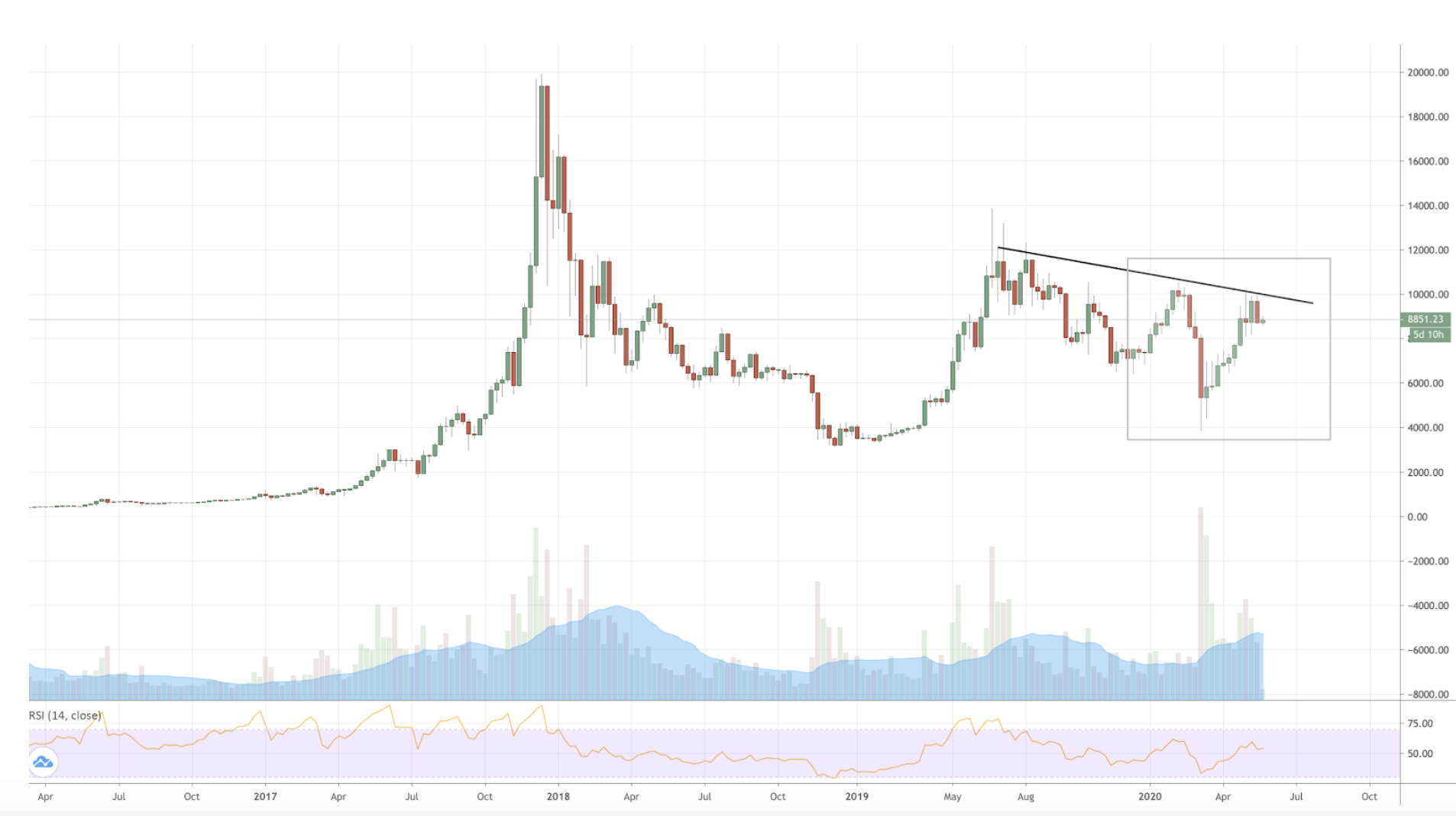 After failing to break through the $10,000 zone, Bitcoin saw its upward momentum come to an abrupt halt last week. This sparked a week-long retrace, eventually finding support at the $8,500 zone formed on 11 May. Currently trading range bound between the levels of $8,600 and $9,000, Bitcoin is in a fairly uncertain zone, with a breakout in either direction equally plausible at this point.

The market’s indecision is also evidenced by the Relative Strength Index (RSI), which currently sits at the 50 point range – the midline that separates the upper (bullish) and lower (bearish) territories. Trading volumes are also falling, although they are still up on last month.

The good news is that the market is still trading above the recent-term upward trend line that has been developing since mid-March this year. As we near the confluence zone formed by this trend line, the market may soon provide a clearer indication as to whether the bulls or bears are in charge. However, until then it seems that a fair number of traders are content to sit on their positions awaiting further market clarity. 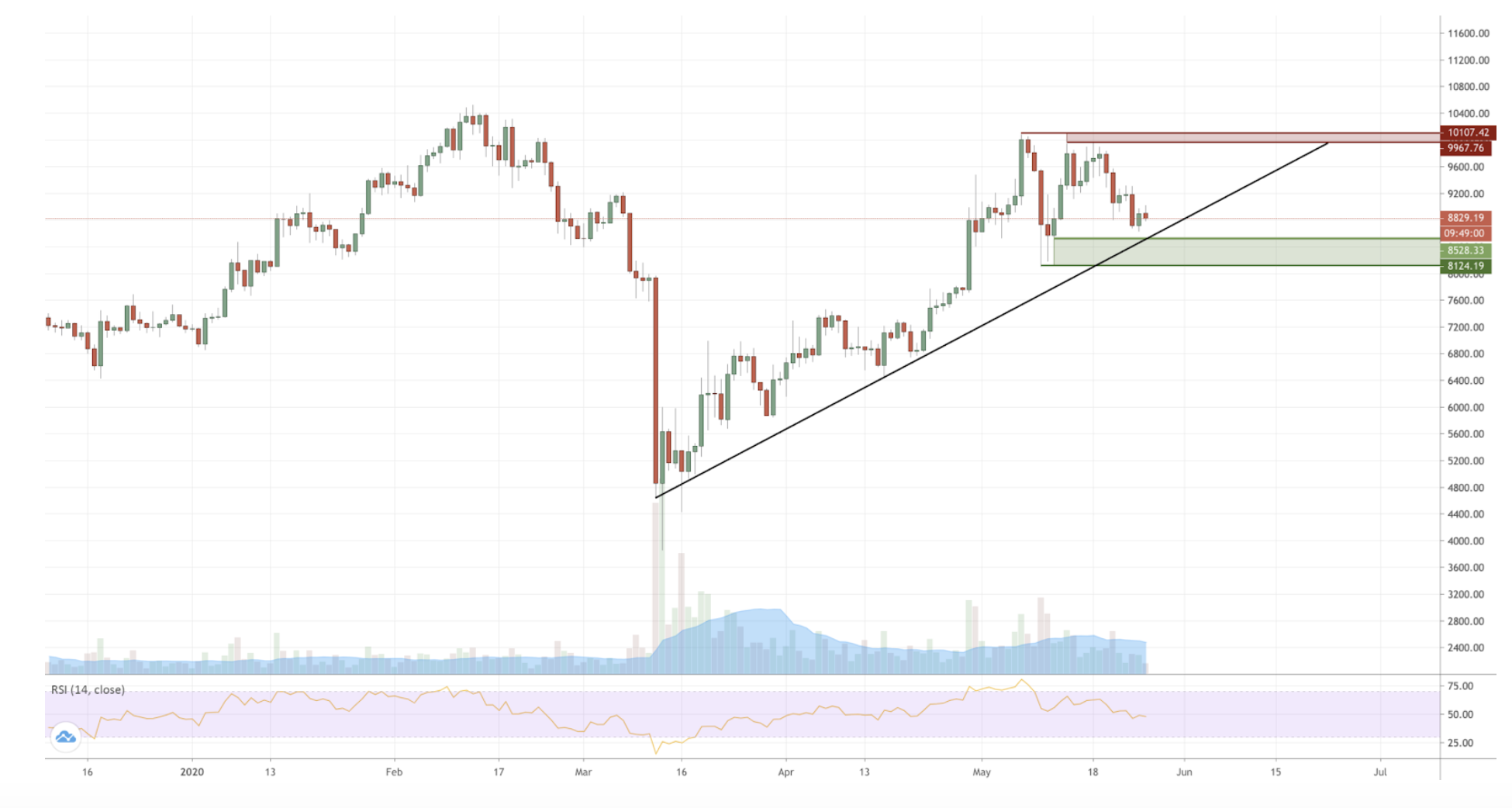 Looking towards a longer-term view, last week saw Bitcoin close $1,000 lower than it opened – erasing the gains seen in the previous week. In spite of its strong recovery after the initial market shock of COVID-19, at a macro level, we are still witnessing a marginal downward trend from the highs of May 2019.

The Bitcoin network is doing well after the halving a fortnight ago. Last week, mining difficulty for Bitcoin dropped by 6%. This indicates that less miners are competing to solve the puzzle to win the freshly minted Bitcoin, as it became less profitable to mine after the halving. However, many expected a much larger drop and that this would be the end for a large group of miners. This did not happen. 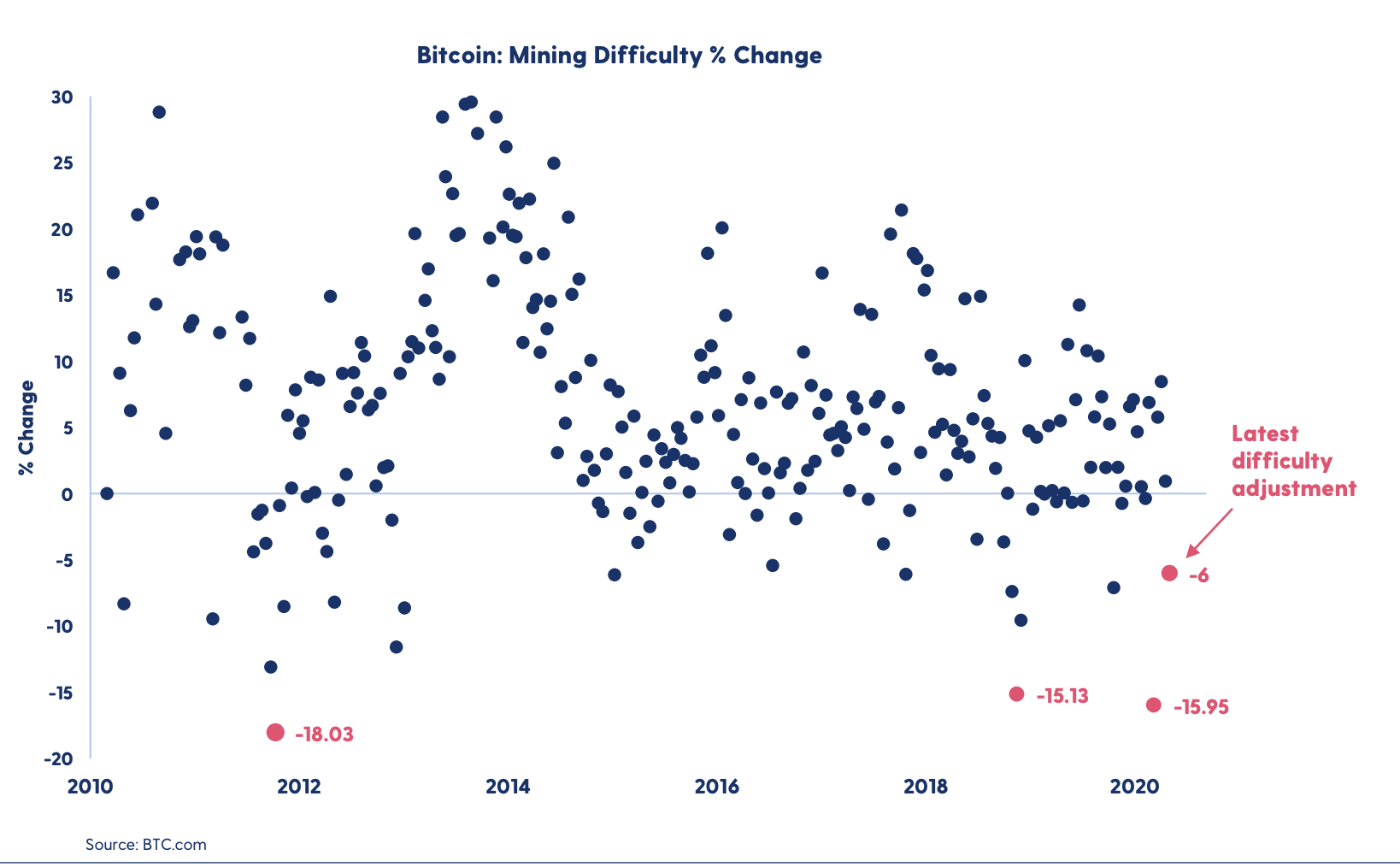 Still uncertainty in the market

The Fear & Greed Index is now down to 41 and the market is fearful again after yet another push to a neutral state. This means that the market is more or less back to where it was a week ago, after failing to push above $10,000 for the second week in a row.

Was it Satoshi moving his Bitcoin?

Satoshi was not the sole miner at the time of the block reward attributed to this transaction. Analysis of the Bitcoin blockchain has identified a pattern in the nonces which is linked to Satoshi. In the chart below, the blocks believed to have been mined by Satoshi (The Patoshi Blocks) are highlighted in blue. Nonces not linked to Satoshi are in green. The block contributing to the block reward that was moved this Friday does not belong in any of the Patoshi Blocks, and probably belongs to another early miner.

The Bitcoin price was moving sideways in the beginning of the week with low volatility but has now started to trend downwards. The 30-day volatility is now back above the 7-day volatility, but this can soon retrace as the uncertainty has picked up over the last days.

Africa is one of - if not the most - promising regions for the adoption of cryptocurrencies. This is due to its unique combination of economic and demographic trends. While the overall adoption is relatively low, the potential is enormous, the growth is rapid, and the development is likely to become defining for the cryptocurrency industry going forward. 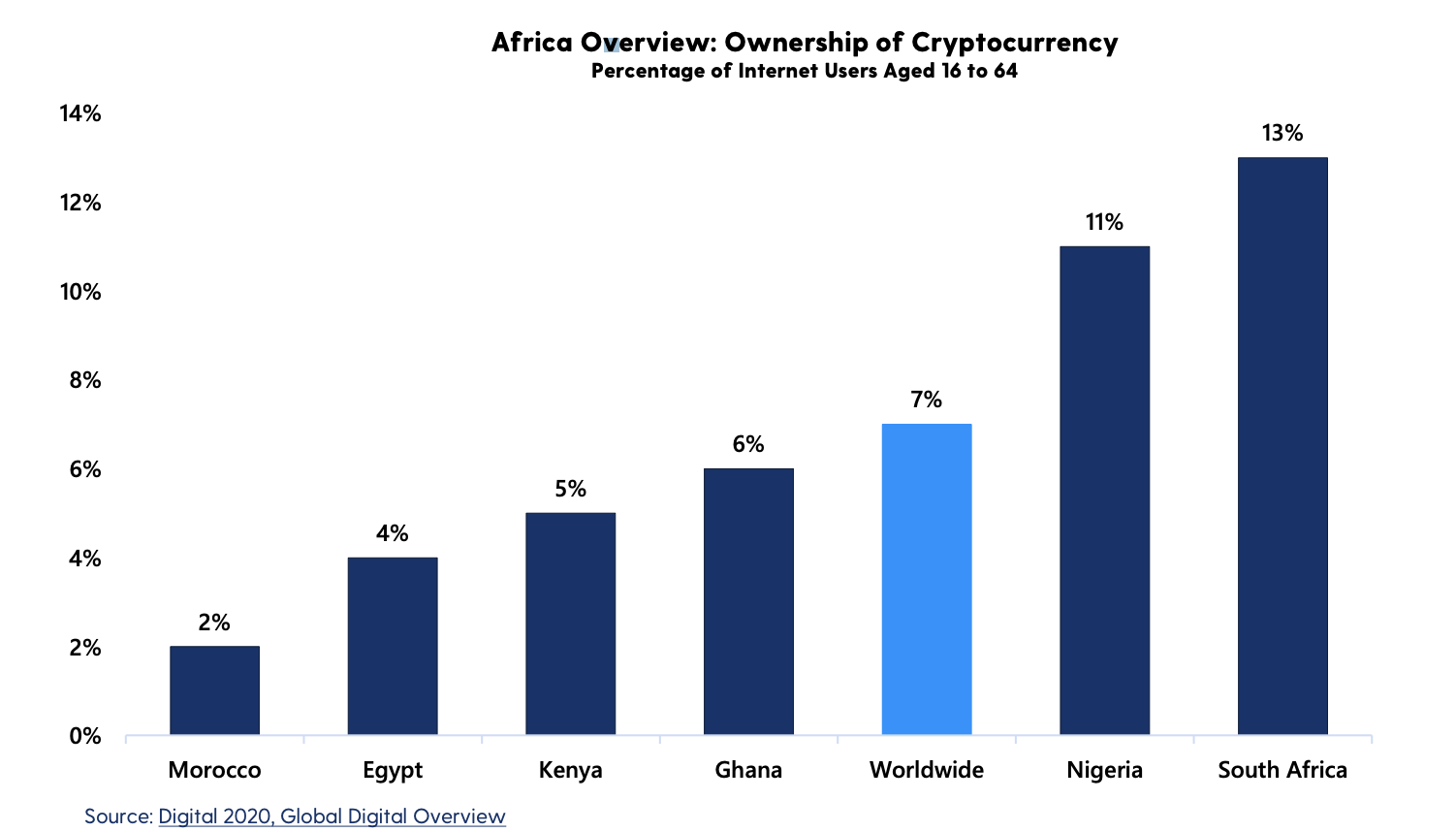 Although it’s a diverse region, African nations share key similarities and trends. Economic problems, from high inflation rates and volatile currencies to financial issues such as capital controls and a lack of banking infrastructure, create a fertile ground for an alternative to germinate. Cryptocurrencies are positioned to become the ideal antidote to these challenges.

Cryptocurrency adoption in Africa is somewhat of a dichotomy. High ownership rates in certain countries, but still a significant lack of the typical infrastructure we see elsewhere.

Luno and Arcane Research have just released an in-depth report covering the state of crypto in Africa – access the report here.

Also don't forget to check out Banking on Africa: The Bitcoin Revolution – a new documentary produced and supported by Luno, available now on Amazon Prime.