This week all eyes have been on Bitcoin after a massive rally that pushed the digital asset past the $11k mark. While this news has us crypto fans bouncing, the US reserve bank had more to worry about this week following Goldman Sachs’ warning the US dollar could lose its reserve currency status. To top it off, rumour has it more Americans are going to buy BTC with their second stimulus cheques – just like the last time.

Grab a coffee, we’ve got the details.

According to Glassnode, the move means about 93% of all Bitcoin address balances are now estimated to be in the black. This means the balances of assets transferred into 93% of wallets was done at an average price lower than the current price. 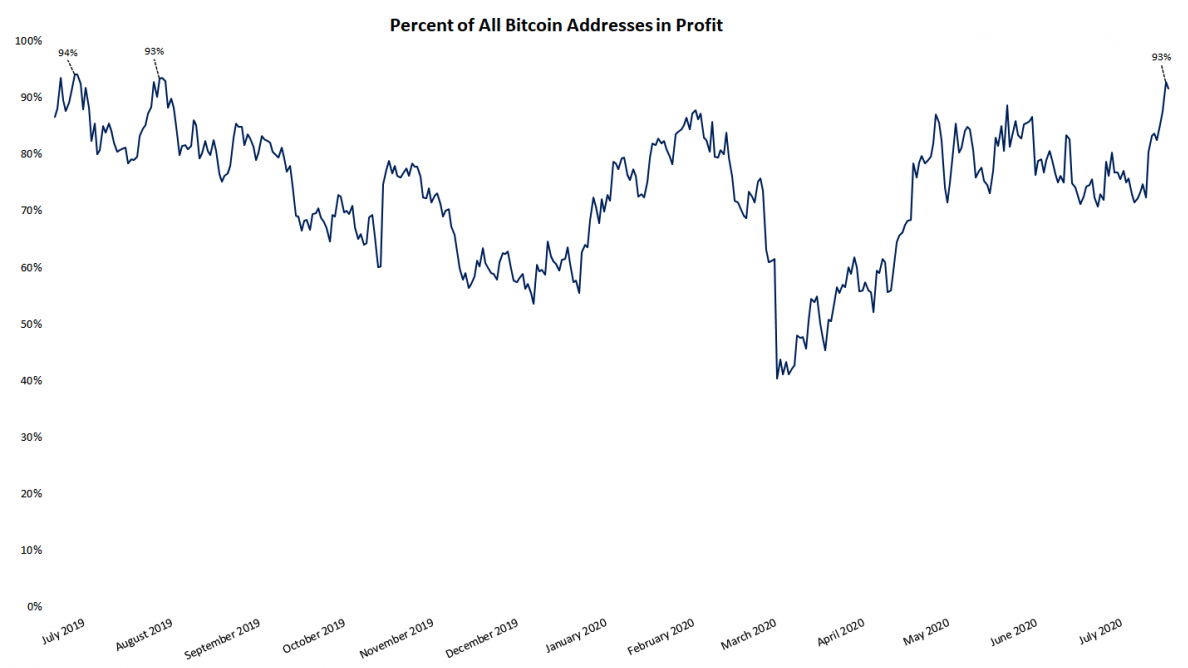 The number of balances in profit is up 29 percentage points from the 72% mark recorded on 20 July. The last time more than 90% of Bitcoin addresses were in profit was July and August 2019, when Bitcoin traded around $11,500.

Josh Olsewicz, crypto trader at Techemy Capital believes a high percentage of addresses “in profit” increases the likelihood of investors selling those Bitcoins to realise their profit. What impact will this have on the price? Is he right, or will they HODL?

Takeshi Kimura, departmental director-general at the Bank of Japan (BoJ), this week told Japanese news outlet The Asahi Shimbun that the digital yen is a ‘chief concern’ for the central bank.

The BoJ has been experimenting with a central bank digital currency (CBDC), but has not announced plans to launch one. The government said this month that the launch of a digital yen would, however, be considered as part of this year’s legislative agenda.

China’s global lead in CBDC development is sure to have ignited more serious consideration, with the Liberal Democratic Party saying in June it could result in a national security threat.

Elsewhere, Philippine Governor Benjamin Diokno confirmed on Wednesday the Philippine central bank commissioned research for a CBDC, with results due sometime next month.

White House officials have confirmed the US government is expected to approve plans for a second payout. Speculators have suggested more US investors may be planning to use their second $1,200 stimulus cheque to buy Bitcoin – again.

When the government first sent the stimulus cheques in April, crypto exchanges Coinbase and Binance reported a spike in exactly $1,200 equivalent deposits on their platforms. Coinbase CEO said at the time the number of $1,2000-worth deposits and buys on the exchange climbed by nearly 400% that month.

It appears the gamble paid off for Americans who opted to buy Bitcoin – ditching inflationary government money saw some buyers rake in up to 54% in profit in three months as the BTC price skyrocketed past $11k.

According to local publication Irna News, Iran has given the go-ahead for the country’s biggest power plant operators to build and run large Bitcoin mining units.

Mostafa Rajabi Mashhadi, the deputy manager of Iran’s national electricity board and governing body Tavanir, said power plants are allowed to run their Bitcoin mining facilities provided they comply with all regulations, obtain the correct licenses and do not use subsidised electricity.

"Now, and in a situation where the supply of electricity is of great importance to the public, we will not allow those who misuse the tariffs provided for the agricultural and industrial sectors to produce Bitcoin that are worth more than $9,000," he said.

He noted the country has the cheapest electricity tariffs – a significant benefit to Bitcoin miners who usually seek cheap power and cool climates to maximise their profits.

The news has delighted Iranians, many of who’ve jumped at the opportunity; a spokesperson for the electricity board indicated they’ve already received over 14 “major” bids for establishing mining units.

Bitcoin mining could be Iran’s last hope at economic salvation considering the crippling sanctions imposed upon the nation, largely from the US.

Goldman Sachs strategists have issued a chilling warning about the future of the US dollar, noting that “Real concerns around the longevity of the US dollar as a reserve currency have started to emerge.”

The strategists explained the US dollar faces a number of risks, citing that the US debt level has now exceeded 80% of the country’s GDP, anticipating the government and central bank may allow inflation to accelerate.

“The resulting expanded balance sheets and vast money creation spurs debasement fears,” they described, adding that this creates “a greater likelihood that at some time in the future, after economic activity has normalized, there will be incentives for central banks and governments to allow inflation to drift higher to reduce the accumulated debt burden.”

Concerns are further engorged by increasing political uncertainty and concerns the nation may have another coronavirus inflation spike.

In the meantime, the price of gold hit an all-time high on Monday, climbing to $1,931 an ounce, sparking speculation that $2,000 an ounce could soon be seen. Gold is up around 7% in the past month, while the ICE US Dollar INdex DXY dropped 3.7%.

Gold’s unofficial twin ‘safe-haven asset’, Bitcoin, is up 17% since last week and 54% since the beginning of the year. Galaxy Digital CEO Mike Novogratz believes that with central banks mass printing money, it’s “an amazing environment for both being long gold and long bitcoin.”

We’ve just got one question: when moon? 🚀