Has the tide turned for Bitcoin? After a long stretch of sideways price action, a pump for Bitcoin and Ethereum this week gave the community a much-needed boost. And there’s a wealth of good news to keep it buoyant – particularly for Ethereum, which is riding a wave at the moment. Here’s what happened this week.

The US Office of the Comptroller of the Currency (OCC) has clarified its stance on bank custody services in respect to cryptocurrency – and it’s good news, crypto fans! Pack your toothbrush, we’re going to the moon. Well, sort of.

The OCC, which regulates all national banks and federal savings associations, appears to have opened the door for them to hold cryptocurrencies on behalf of their customers.

In a letter addressed to an unnamed bank that had sought the opinion from Jonathan Gould, senior deputy comptroller and chief counsel, dated Wednesday, it was noted: "We conclude a national bank may provide these cryptocurrency custody services on behalf of customers, including by holding the unique cryptographic keys associated with cryptocurrency."

Gould continued: "This letter also reaffirms the OCC’s position that national banks may provide permissible banking services to any lawful business they choose, including cryptocurrency businesses, so long as they effectively manage the risks and comply with applicable law."

This letter should not be confused with genuine regulation, but it could serve as a road map for banks considering offering cryptocurrency services.

“This opinion clarifies that banks can continue satisfying their customers’ needs for safeguarding their most valuable assets, which today for tens of millions of Americans includes cryptocurrency,” Acting Comptroller Brian Brooks said in a statement.

The long-awaited Ethereum 2.0 upgrade looks on course for an end of year release, after developers released the specifications for the “official” testnet on Wednesday. The testnet will begin on 4 August and has been named “Medalla”, after the Buenos Aires metro stop. It will support Ethereum’s multiple clients (different ways of running the blockchain).

Ethereum 2.0 will enable the network to boast faster transaction times and lower fees. As Consensys explains: “Currently, Ethereum 1.0 runs on a consensus mechanism known as Proof of Work (PoW). PoW relies on physical computing power (miners) and electricity (work) to build blocks on the blockchain. Proof of Stake (PoS) is an upgrade which enables improved security, scalability, and energy efficiency. Instead of relying on physical miners and electricity, PoS relies on validators (virtual miners) and deposits of ether.”

Phase 0 of ETH 2.0 has been running on various testnets since the genesis block was created for Beacon Chain in April. The Medalla testnet is run by a decentralised group of programmers, developers and code auditors organised by fork coordinator Afri Schoedon. Schoedon said in the testnet GitHub Wednesday: “The Schlesi testnet was one of many steps in that direction. The Witti testnet was another. The Altona testnet is yet another. The Medalla testnet aims to be the final one prior to mainnet launch.”

Ethereum now the most used Blockchain

More good news for Ethereum fans – Ethereum this week surpassed Bitcoin as the network that settles the most value per day. In other words, the dollar value of the transactions of both Ether (ETH) and the tokens built on it is now higher than that of Bitcoin. 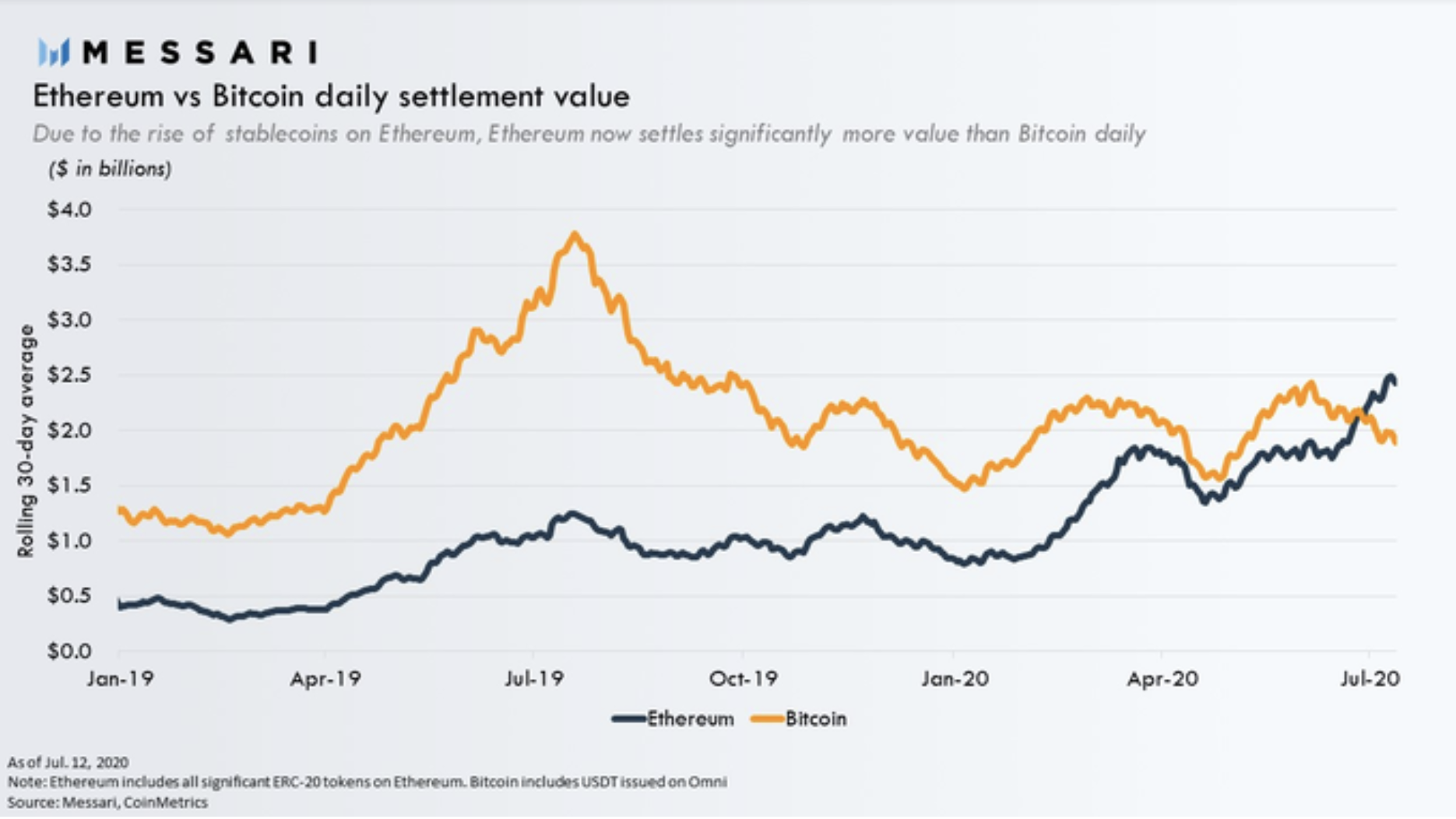 This is primarily down to the rise of Decentralised Finance (DeFi) – specifically stablecoins. The DeFi sector is this year’s ‘in thing’. Stablecoins are a form of DeFi. They are crypto-assets pegged to a fiat currency, most frequently the US dollar.

The Ethereum blockchain has become home to a number of the most popular stablecoins, including TUSD, USDT, DAI, PAX, and GUSD. More than $508 billion in transactions has been settled using these coins so far in 2020 – nearly double the $253 billion settled in 2019. With Ethereum 2.0 on course to increase Ethereum’s capacity, will the move from Bitcoin to Ethereum continue?

Apple co-founder Steve Wozniak was one of 18 plaintiffs to file a lawsuit this week alleging that video-sharing giant YouTube and its parent company Google allowed Bitcoin giveaway scams and promotions that use their likenesses on its platform.

Scammers regularly use images and videos of celebrities to trick people online into sending them crypto. In Wozniak’s case, they used YouTube to convince users he was hosting a live giveaway and that anyone who sent him Bitcoins would get double the number back. Users would then transfer their cryptocurrency irreversibly, but get nothing in return.

The suit follows last week’s Twitter attack, in which a number of high-profile Twitter accounts were hacked and a similar scam promising doubled returns for Bitcoin transfers were added. Twitter was praised for acting “swiftly and decisively” to shut down malicious accounts and “protect its users from the scam”, though we’re still yet to see the true fallout. Either way, be careful out there and remember DON’T SEND CRYPTOCURRENCY TO STRANGERS PROMISING YOU PROFITS. If something looks too good to be true, it almost certainly is.

Mastercard is stepping up its cryptocurrency program. On 20 July, they began reaching out to cryptocurrency firms to encourage them to apply to become partners as part of its newly-expanded ‘Accelerate’ program.

Mastercard said it was simplifying access to Accelerate’ for crypto card issuers, allowing applicants to be onboarded as partners “in a matter of weeks.”

Raj Dhamodharan, executive vice president of digital asset and blockchain products and partnerships at Mastercard, said: “The cryptocurrency market continues to mature, and Mastercard is driving it forward, creating safe and secure experiences for consumers and businesses in today’s digital economy.”