Let’s check out what made headlines in the cryptosphere over the weekend.

The US Patent and Trademark Office approved Amazon’s nearly three-year-old “Distributed ledger certification” filing on Tuesday last week. The patent details the tech giant’s plans to use distributed ledger technology (DLT) to instil “digital trust from the first mile of an item’s supply chain” to the last.

Amazon’s system compiles data from distributors, manufacturers and shippers on an “open framework” that builds a products’ source of origin across information silos. The data could be displayed for the customer as shown in the patent drawings below. 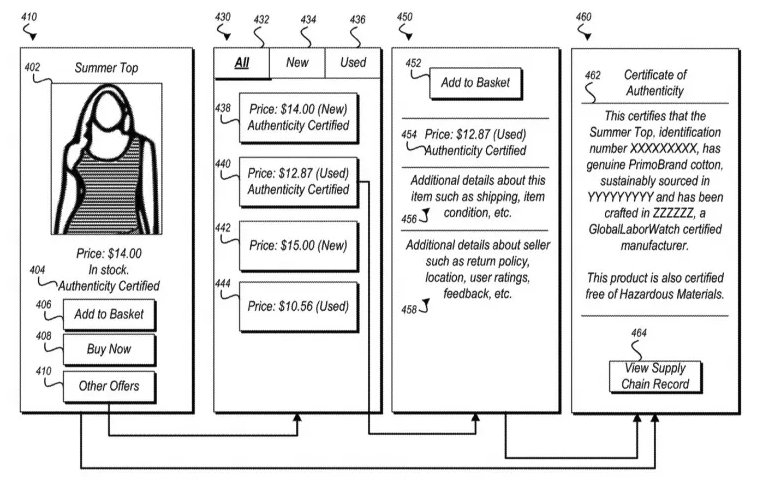 The brief was unusually philosophical as far as patent filings go, highlighting the “proliferation” of “systems and databases that can often lack transparency, coherency, referential integrity or security”. It also said these “patchwork” technologies fail to encompass the global supply chain. Amazon has become more and more critical to that supply chain; last year its own couriers delivered 3.5 billion packages, 46% of its own total.

Amazon argued distributed systems offer a compelling solution against the aforementioned tech deficiencies. It believes DLT has the potential to protect data from alteration, remove single points of failure and avoid the managerial problems of centralised authority.

In the patent, it mentions Hylerledger could be one form of DLT used, but patent filings don’t necessarily indicate that a company is using a specific technology.

According to the US government, Amazon’s e-marketplace is drowning in counterfeit products. Last year the company launched a counterfeit detection initiative called “Project Zero” that seeks to intercept bogus products. Amazon officials told the Wall Street Journal in 2018 that they planned on spending billions of dollars fighting fakes. At this stage, it’s unclear whether or not Project Zero has been successful in its endeavour.

I'm the person who predicted Bitcoin, the most crippled crypto-tech, would reach $1 mil.

Are you one of the persons who did not see the absurd humor in it?

I posted it on the same day I predicted Whale Fucking would replace Surfing as the number one water sport.

If Bitcoin ever hit $1 mil, it's market cap would be greater than the GDP of the entire North American Continent.

What idiot could believe such nonsense?

Whale Fucking is a thousand times more likely to make its way onto the Olympics Stage.

Earlier this year, McAfee tweeted that Bitcoin is an “ancient” tech and his prediction on the price going to $1 million was simply to lure new users into the space. As chance would have it though, he recently introduced his own privacy-focused cryptocurrency called Ghost, which may somewhat taint his impartiality.

He also recently admitted that his Ghost project “copy-pasted” parts of its whitepaper from the documentation for open-source privacy coin PIVX. Despite this, he still appears intent on suing PIVX for defamation.

J.P. Morgan appears to be jumping on the crypto bandwagon

J.P. Morgan, the largest US bank in terms of assets, has long positioned itself as Bitcoin’s “biggest enemy”. When J.P. Morgan’s chief executive, Jamie Dimon, called Bitcoin a “fraud” in September 2017, the price rose to around $20,000 for one Bitcoin before crashing to under $4,000.

But it seems the banking behemoth has had a change of heart. Earlier this month, the Wall Street Journal reported that the bank signed Coinbase and rival Bitcoin and crypto exchange Gemini after a long vetting period. J.P. Morgan is already processing transactions.

"Ironically, Brian Armstrong and Jamie Dimon of J.P. Morgan—who was the biggest enemy of bitcoin and has pissed on it for years—it turns out they were having secret meetings in 2018 at J.P. Morgan’s headquarters,” Roberts told Laura Shin in her Unchained podcast while promoting the book that charts Coinbase’s rise to the top of the crypto totem pole.

The Bitcoin and crypto community have complained for years that banks like J.P. Morgan have denied them services and blocked accounts that had anything to do with crypto. Though their animosity may never really have been all that intense. Umar Farooq, J.P. Morgan’s head of digital treasury services and blockchain said in 2017: "We are supportive of cryptocurrencies as long as they are properly controlled and regulated”.

Last year, J.P. Morgan launched JPM Coin, but unlike Bitcoin, it’s pegged to the dollar and is geared towards speeding up and reducing the costs of global payments.

Bloomberg editor and analyst Joe Weisenthal, commenting on a Twitter thread by Armstrong, said: “I'm sure he would deny it, but it's interesting to me that the CEO of the world's most prominent bitcoin-related company seems so sceptical of Bitcoin”.

I'm sure he would deny it, but it's interesting to me that the CEO of the world's most prominent Bitcoin-related company seems so skeptical of Bitcoin. https://t.co/mlekHKO3Iz

Forget what you thought you knew about Devon; it’s pièce de résistance can be found at the Bishop Lacy Inn at Chudleigh – the oldest building in the world to house a Bitcoin ATM.

The company behind the crypto ATM said they experience queues of people lining up to use the machine at the pub – the majority of whom are women in their 60s.

The Grade II listed Fore Street pub dates back to at least 1730, but evidence suggests there’s been an inn at that location from as early as 1158.

Steve Underwood, one of the directors at SatoshiUK, the company that installed the ATM, said: "We are extremely happy with the way the ATMs are going - they are getting fantastic usage, well beyond our wildest dreams. At one time before lockdown we had people queued up to use it. Interestingly we have found that the most popular demographic group who use the machines are women in their early 60s. They tend to be people who are looking for a new home for part of their portfolio."

Onfo’s social mining experiment looked at two developed nations, the United States and Germany, and two developing nations, Indonesia and Russia. Free crypto assets were sent to 100 individuals from each country – each person received 10 coins. The individuals could get more coins if they attracted other users to try the crypto asset. The results indicated the network effect spread was four times faster in Russia and Indonesia than in the US and Germany.

The report detailed: “The spread index turned out to be almost 4 times higher than in the US, given that the two countries [the US and Indonesia] have similar population sizes”. 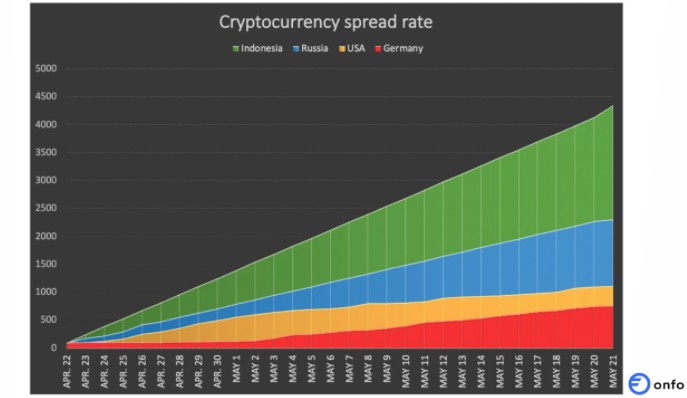 J.R. Forsyth, Onfo’s founder, believes a faster spread in developing nations can be attributed to the fact small amounts of money are valued more in those regions. Speaking of Indonesia, the report said: “The absence of a national credit lending system, coupled with increasing smartphone penetration and the consequences of the coronavirus pandemic, are also making Indonesia a ripe market for cryptocurrency disruption”.

Forsyth reiterated: “Indonesia possesses the unique conditions that make it well-poised for Bitcoin adoption. As the world’s fourth most populous country, it’s home to a largely cash-based community, and huge swaths of the population — up to 80% — remain unbanked”.

The report believes Southeast Asia is ripe for crypto adoption, while mentioning that South Africa is also seeing the beginnings of a “crypto renaissance”.

“South Africa has the highest percent of cryptocurrency ownership or use among internet users in Africa, standing at 13%, followed by Nigeria with 11%,” Onfo’s report concludes. “The increase in volumes of cryptocurrencies across the continent has also seen P2P volumes from Sub-Saharan Africa overtake Latin America for the first time.”