Women have long been underrepresented in tech fields and are in a recurring struggle against gender biases and stereotypes. The crypto space, unfortunately, does not seem to be an outlier in this respect.

A recent study published by LongHash revealed just 14.5% of the employees at 100 crypto startups were women. While the very fabric of the internet is being rewritten through blockchain technology, isn’t now the chance to rescript the gender narrative and champion women in crypto and tech at large?

We recently sat down with Lightning Labs software engineer Carla Kirk-Cohen, to find out how she’s contributing to the Lightning Network and its development, as well as her experience working in the space, representation in the industry, and gender bias.

Starting a career in crypto

Like many graduates, when Carla left university she was faced with a difficult question – what do I want to do next?

“My main priority was finding work that I cared about,” she explains. “I was surprised by how few options that left me with. There were plenty of roles available in online shopping, insurance, business solutions etc, but very few where I felt I’d feel fulfilled.”

That’s when she found Bitcoin. Since then, she hasn’t been able to imagine herself spending time on anything else.

“When I read the Bitcoin Whitepaper, I was in awe of its simplicity, audacity, and mission to reshape the world’s common medium of communication - money.”

Carla’s first role in the software space was actually at Luno, where she was a member of the crypto and security team. This was her first step of an incredible journey in crypto so far. In 2019, she attended the Chaincode Labs Summer Bitcoin Residency, making some of her early contributions to Lightning Network Daemon (lnd), Lightning Labs’ implementation of the Lightning Network protocol. This is also where she first connected with her current team at Lightning Labs.

Today, Carla is a software engineer at Lightning Labs, working on the lnd implementation of the Lightning Network Protocol to provide superior reliability, security fit for a global-scale financial application, and interoperability – the ability for software to exchange and utilize information. She also works on associated infrastructure projects such as Lightning Loop and the Faraday node management suite.

“The experience of working with the open-source Bitcoin and Lightning community is incredibly motivating and rewarding. I work on a team of 16 people, but it feels like I have hundreds more colleagues because our community enthusiastically interacts with us, provides feedback, and builds on the software we release.”

A leaky pipeline of female talent

For Carla, a big factor in her decision to work in the cryptocurrency space was Bitcoin’s power to make a palpable difference to the lives of many. As she notes: “The ability to financially operate without censorship is helping fund protests against corrupt governments, providing refuge to survivors of domestic abuse, empowering less traditional industries, facilitating remittances in developing countries and protecting freedoms in countless other cases.”

“Every tech company evangelises that they’ll help build a better world (while quietly mining our data for profit). But with open-source, decentralised networks we have a chance at actually making a difference”.

Unfortunately, while Bitcoin might be looking to solve many of the world’s issues, there are still significant issues surrounding gender inclusivity in the industry itself — a problem common to tech generally. And it’s not a problem that’s easily solved. As Carla explains, the issue hinges heavily on supply and demand. Simply put, the lack of women applying for jobs in these fields, as well as what hiring managers and companies look for in potential candidates.

“To me, the matter of inclusion — across all demographics, not just gender equality — is a question of supply and demand. We need to ask ourselves what is going wrong on both sides of that equation, and critically evaluate [how] bias or discrimination is affecting the process, on a per-company level, and as an industry as a whole.”

Recent surveys suggest female students and employees are under-represented in STEM-related fields. According to the World Economic Forum (WEF), less than a third of female students choose to study higher education courses in subjects like maths and engineering, and those women who do work in STEM fields are less likely to have their research published and typically receive less pay than their male counterparts.

Despite more women working in STEM-related fields on a year-on-year basis, progress is slow. The United Census Bureau notes only 27% are STEM workers, while eurostat says 41% of scientists and engineers in Europe are women, and UNESCO states that less than 30% of STEM workers are female. Across Asia, between 18 and 23% are STEM workers.

Carla says there are many reasons why there aren’t as many women entering the field as there should be, but it often starts young and the issue is systemic.

“We have an education system that was not designed to promote women in STEM,” she explains. “In 2009 the all-girls school I attended did not offer Computer Science or AP Mathematics so I moved to a co-ed school where I was promptly told I ‘was a man’ for enrolling in AP Maths.”

Women are also underrepresented in maths and statistics (4:5), ICT and technology (2:5), as well as in engineering, manufacturing and construction (3:10) according to WEF statistics.

“This is where representation plays such an important role,” Carla notes. “I was in my early twenties when I first met a senior female engineer; somebody who proved the point that maths and computer science aren’t ‘for men’.

“Even as a young adult, meeting somebody who I could look up to who looked like me was pivotal, and helped counter the imposter syndrome I felt working on an entirely male team.”

“By the time I reached CS Honours at university, I was one of five women in the class of 100.”

Demand is more complex than supply when it comes to representation. For Carla, it often comes down to the hiring policies of individual companies. She notes, “While there certainly is discrimination at some companies, I’m too optimistic to believe that every company in the space is intentionally failing to hire diverse candidates.

"The theory of statistical discrimination states that discrimination in hiring processes occurs mostly due to perceived differences in abilities - hiring managers with a history of hiring white men have experiences that they can draw on and confidently hire another white man.

“When they interview a woman, they have little or no previous experience to draw on, so they choose not to take the risk of the unknown and so the cycle perpetuates.”

So how do we break free from gender-stereotypes and attract more women to the space? Carla explains this is a tricky endeavour filled with intricacies, but ultimately, empowering women with real opportunities to show their capabilities is one way we can begin to move forward.

“Addressing this perception-based inequality is challenging, particularly because there is a fine line between elevating minorities and accidentally ‘othering’ them further.”

“If we empower women in tech with real opportunities — leading teams, speaking at conferences and generally demonstrating their excellence - rather than just paying lip-service to diversity, we help break this perception-based hiring discrimination and move forward with a better understanding of each other.” 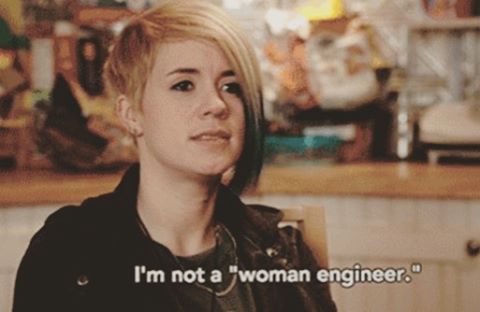 The future for female engineers

Looking to the future, Carla says the best advice she could give aspiring female engineers is to cultivate a network of people who you know are able to guide and help you reach your career goals. Cryptocurrency is based on the idea of community, and that is especially important to harness for women looking to break into the field.

“Often, the hardest part of breaking into an industry is the first step. I have found that just knowing one person inside an industry changes makes it a lot easier to get involved. It’s a massive help addressing imposter-syndrome when you have somebody to run things by.

“If you don’t know a single person, and you feel that you can’t progress without help, send one cold-call message to one person in the field. Worst case, they ignore you – the world does not end. Best case, you make a connection with somebody who once had the same getting started fears that you did. And if that field happens to be Bitcoin, DM me on Twitter, I will respond.”

Luno is an equal-opportunity company that celebrates race, gender, and religious diversity. We strive to create a space where people of all backgrounds can contribute to a brand new financial system that reflects transparency and empowerment. By championing each member across every team, we can bring out the very best in humanity and deliver it to the world.