More good news for bitcoin this week as the price stays above $10,000 for its second-longest ever run. Elsewhere, Bitcoin mining difficulty is hitting a new high and institutional investors continue to send out bullish signals as investment firm, Fidelity, files for a new bitcoin fund.

Kick back and catch up on this week’s biggest crypto headlines.

Fidelity president and director of digital funds Peter Jubber filed paperwork on Wednesday with the US Securities and Exchange Commission (SEC) informing them of a new fund dedicated to bitcoin.

Wise Origin Bitcoin Index Fund I, LP was incorporated this year and is being run from the same Boston headquarters, where the investing behemoth manages $8.3 trillion in customer funds.

Early documentation provides few details about the fund and indicates no investors have currently participated. So far, what we know is that the minimum investment required to join the pooled investment fund is $100,000, meaning it’s likely only for institutional and accredited investors.

The firm recently published results from a survey of 800 institutional investors from the US and Europe, and found that 36% of respondents were already invested in digital assets, while 60% said digital assets had a place in their portfolio.

Although the relationship is between Wise Origin Funds and Fidelity Digital Asset, Smithfield, Rhode Island-based Fidelity Brokerage Services LLC will serve as the fund’s custodian, according to the documents.

A trademark application for the name Wise Origin Funds was filed by Fidelity intellectual property vice president Thomas Barry and is currently under review by the US Patent and Trademark Office.

According to the central bank, the team consists of 12 members in an intergovernmental group. They’re tasked with assessing how a central bank digital currency (CBDC) could fit within the national payments ecosystem and its impact on the economy and society.

Previous reports have shown Brazil spends around 90 billion reals ($16 billion) annually to guarantee a functional supply of paper money in circulation, making up between 1-2% of its GDP.

The new group will examine how much money could be saved by issuing CBDCs and if it would be beneficial overall for the national economy.

Rafael Sarres de Almeida, an official from the Information Technology Department of the Brazilian central bank, said in the statement: “The subject of digital currencies addressed by central banks has been on the research agenda of many central banks for some time. However, this year, there was a greater focus on a more practical approach.”

As many other countries around the world have allocated resources to study and potentially implement CBDCs, it comes as no surprise the nation looks to keep up.

Bitcoin mining difficulty has increased by 9% since the 11 May halving, a strong indication the ecosystem remains healthy despite post-halving miner capitulation fears.

An all-time high hash rate, as well as a stable bitcoin mining industry, are both positive signs for the medium to long-term trend of bitcoin.

According to Glassnode data, bitcoin’s mining difficulty increased by 3.6% on 24 August and is now at a new high. The data indicates many miners are actively mining BTC, even more so than before the halving. 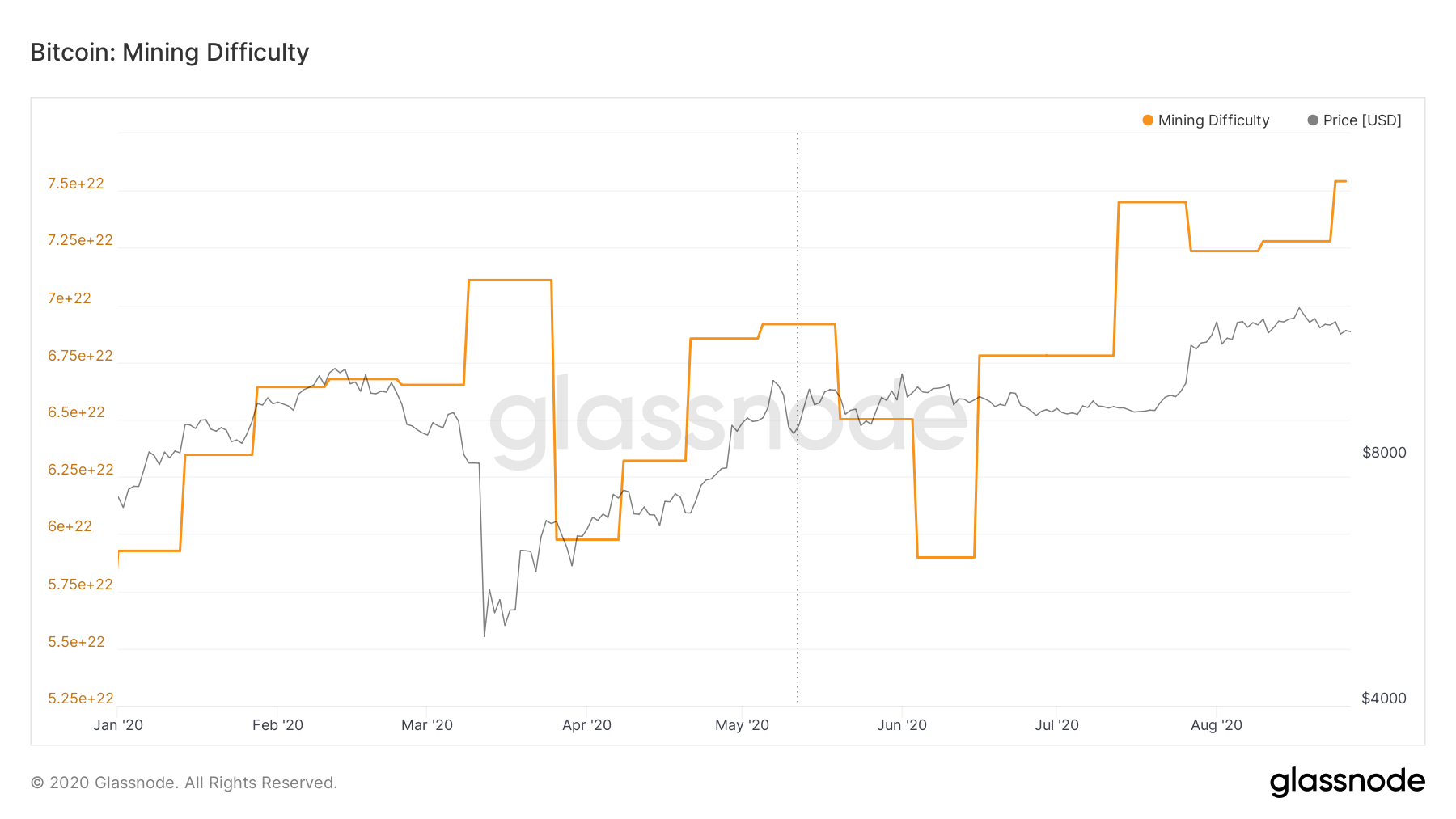 Bitcoin’s hash rate has continued to hit new record highs over the years but this one’s different due to the timing. The hash rate’s rapid recovery since the halving and the all-time high difficulty suggest miners are anticipating a strong medium-term bitcoin price trend.

Additionally, the surge in hash rate could be attributed to the profitability of miners in China. Sichuan province is currently in its rainy season and the abundance of hydroelectric power plants in the region gives miner’s access to cheaper electricity, reducing their overall costs.

Bitcoin’s price remains above $10,000 for second-longest ever run

On Wednesday, bitcoin registered its second-longest period with a value of over $10,000. It’s remained above the five-figure milestone for 29 days and counting.

Charles Bovaird, VP of content at market advisors Quantum Economics said: "The question is what's different this time around? Investors interested in the entire crypto space have become more sophisticated, demanding more than they did while digital currencies were experiencing astronomical gains between 2017 and early 2018.”

He added, "Since crypto investors have become more sophisticated, it creates an environment where digital assets and projects seeking investment can benefit from more sustained interest.”

Alternatively, new interest in the wider crypto ecosystem could play an important factor. Charles Storry, co-founder of PhutureDAO, explained that, “With the recent increase in new capital aimed at the DeFi ecosystem, it's clear to see Bitcoin and the rest of the market has benefited from this. Fresh capital always moves to Bitcoin first. This is just the start.”